The Misplaced Paeans for Andrew Peacock 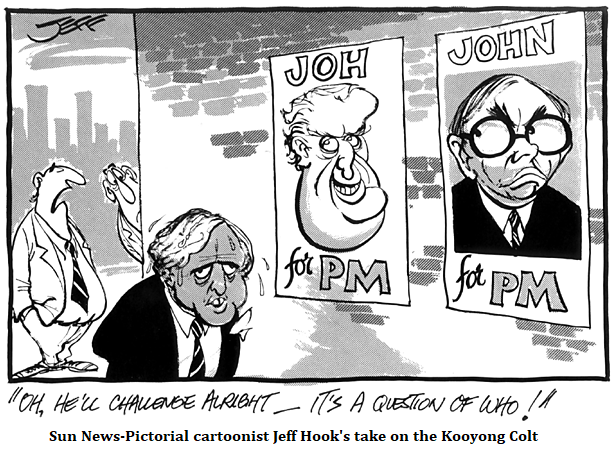 A better example of academic misinterpretation of non-Labor politics could not be more found than in Griffith University Paul William’s article on the late Andrew Peacock who led the Liberal Party from 1983-85 and from 1989-90 (Courier-Mail 23 April 2021; paywalled).

The surfeit of praise for Peacock, who never achieved one major reform of worth, is amazing. Of course, for left-of-centre academia, just being a so-called ‘moderate’ means everything, yet such praise misunderstands the complex nature of the Liberal Party.

Peacock was intelligent and charming, but he was there for a ride, not for the policies, He stood for little but his own promotion. Despite first joining the ministry in 1969 as Army minister, Peacock never held a major domestic portfolio until October 1980, when he became minister for industrial relations in the Fraser government, and then only for a few months before unsuccessfully challenging Fraser and soon finding himself sacked. Peacock did return to the ministry in the last five months of the Fraser administration, holding the Industry & Commerce portfolio.

For most of his time he held ministries of external territories (1972 only) and foreign affairs (1975-80) – places where any Australian minister can look good, as the present incumbent shows.

Peacock, unlike Howard, never articulated a reform agenda in the important domestic policy areas. He was never prepared, like Howard, to stand alone and lead the Liberals anywhere.

Williams neglects to mention how Peacock, this great ‘moderate’, was best mates with Queensland’s National Party then-minister for everything, Russ Hinze, and spent a lot of time with the rich horse racing set. Nor does Williams mention how Peacock undermined the Coalition and John Howard’s leadership with his flirtation with the mad Joh for Canberra campaign in 1987 that destroyed the Coalition and caused the subsequent federal election loss.

Also overlooked is Peacock’s involvement in the attempted recruitment of then corporate business leader John Elliott as Liberal leader. Peacock was well connected alright – especially to the Big End of town!

When that did not work out, Elliot, by then Federal president of the Liberal Party, gave his support (and staff) to the Peacock coup against Howard in 1989. It was slickly done, but soon came undone when two of the plotters went on 4 Corners to crow about their success. That completely undermined the legitimacy of the leadership change and deepened the schism between Howard and Peacock. Further, one of the plotters, John Moore, was reported in the media as saying that Howard should ‘fade away’.

Of course, all would have been forgiven had Peacock won the 1990 election – but he didn’t. Peacock was not helped by the fact that another of the plotters against Howard, Peter Shack, who had become health spokesman, had to confess during the election that the Liberal Party did not have a health policy.

Williams inaccurately says the Peacock ‘would find it difficult to secure preselection in today’s conservative Liberal Party’. To call the Victorian Liberal Party ‘conservative’ you must be kidding. Peacock would have had no trouble in being pre-selected in the present Victorian or, for that matter, the NSW Liberal Party. Indeed, the current Liberal member for Kooyong, Treasurer Josh Frydenberg, is so soft and moderate that it beggars belief.

Further, Williams suggests the Liberal Party under Menzies was a Victorian party and that is has somehow ‘moved from its roots’ in not having leaders from that state. What nonsense! The Liberal Party founded by Menzies was not just a Victoria-based party but a national one. Howard, from NSW, won four elections. Abbott, also from NSW, brought them back to office in a landslide election after only six years in opposition.

Peacock never won an election, despite two goes.  He was never a threat to the Labor Party.

Dr Scott Prasser is the author of Menzies: Man & Myth and numerous articles and chapters on the Liberal Party and Coalition politics. He also edits Connor Court’s Australian Biographical series

The Corporate Scolds of Contemporary Capitalism