Following the Science into Crazytown 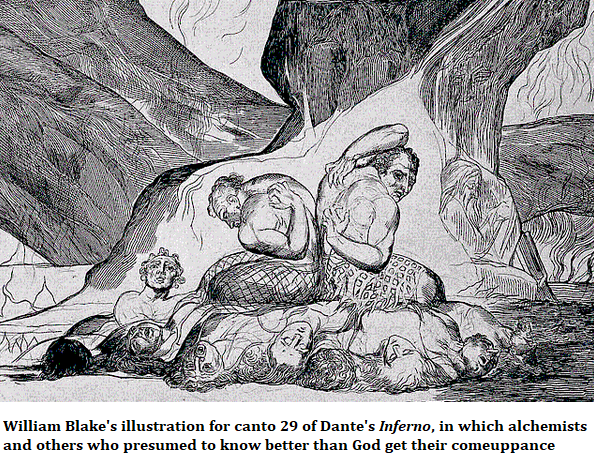 God made the world and everything in it. All else is too improbable. The universe was made so that we could be made. Without the one hundred billion galaxies each with one hundred billion stars, the earth, our life-giving home, would not exist. Everything is needed to sustain the earth; nothing is superfluous. Believe all that or not, but please don’t believe cockamamie scientists.

Because there are so many stars and encircling planets, many scientists believe that intelligent life must exist elsewhere. As the universe is much older than the earth, some go further, claiming that much more advanced life must exist.

You will notice that they never quote the odds of intelligent life arising on any given planet. My sister believed that there were so many flying-saucer sightings that at least one must be real. My sister and scientists who simply rely on large numbers to establish their case are on the same page — and she, without any degree in science at all.

Suppose I locked an ape in a room for a day with a bottle of water, a bowl of bananas, plenty of Basildon Bond paper and a typewriter. What are the odds do you think of me finding Hamlet neatly typed next day? Believe me when I say that if these odds are anywhere remotely close to the odds of intelligent life arising on any given planet, then there are far too few planets in the universe to credibly think that intelligent life exists elsewhere. Yet with zero evidence, and without knowledge of the odds, claims that such life exists are commonplace among scientists. They feed the gullibility of the unwashed.

And, as you can’t get lower than zero evidence for unfalsifiable spitballing, go for broke! And they do, protected as they are from ridicule (well, mostly) by being credentialled scientists. This, below, is where they end up.

In some far-flung parts of the universe robots have supplanted organic life or perhaps melded with organic life to form cyborgs. And, we better keep shtum -, cosmologically speaking, lest the aliens discover our whereabout and do us harm. For example, Michio Kaku (professor of theoretical physics in the City College of New York among other accreditations) explained this with a straight face while speculating, in the same talk, that aliens might already be here, having sent their consciousnesses travelling agelessly on light beams throughout the universe. And why don’t we know that they’re here? Why, because we are too primitive to pick up their signals.

And why do we have to try to disguise our presence if the aliens are already here? He didn’t say. Holding contradictory ideas at the one time is an attribute of only the cleverest minds – though, to be clear, not so clever as the brainiest cyborgs who can send their consciousnesses on light beams.

Where am I going with this? At one level it’s a matter of believing in God or becoming a crackpot. On a more mundane level, it’s to do with people of normal common sense not being snowed or cowed by so-called scientific experts, whatever their field of expertise. Some cosmologists have shown how silly they can be. They are not alone. Numbers of climate scientists and medical scientists have followed suit.

We are told that CO2 is about to fry the planet. It’s not quite on par with aliens traveling on light beams; nonetheless, there is no compelling evidence to back up this fanciful claim, unless you count a simplistic association of CO2 emissions with some recent inconsequential warming of the planet. It’s been warmer before without the accompaniment of man-made emissions. CO2 has been higher before without the accompaniment of man-made emissions.

Here is another difference between Professor Kaku and, say, climatologist Michael Mann. Kaku’s dumb ideas do no damage except to our confidence in his and some of his colleagues’ soundness of mind. Mann and his fellow travellers’ dumb ideas are a different kettle of fish. They have turned the world upside down. At their behest we are replacing dispatchable, reliable and cheap energy with intermittent, unreliable and costly energy. All to no purpose. And, troublingly, with no idea into what seas of despair it might lead the free world. More troubling still, China won’t be joining us.

Segue from dumb to at least as dumb. Unhinged medical scientists at the heart of government decided for the first time in history that healthy people and children at no risk, should be locked down to contain the spread of a virus of lethality no greater than a bad flu. Initially, if you recall, this was to flatten the curve of infections in order to allow hospitals to cope. This morphed, effectively, and seamlessly, into eradication.

There is a very good chance that this unique stratagem has given the virus windows of opportunity to continually find fresh un-immune hosts and the time to mutate. The hyped-up pandemic might not have  lasted so long (and likely to continue) if the healthy population of adults and children had been exposed to the virus within a short timeframe. Now, it’s never-ending. And rushed, inadequately tested, so-called vaccines which don’t stop you catching it or spreading it, won’t stop the madness. Once eradication is the goal you have to be very, very lucky to hit that target. Think here of colds and flus. Biden will likely be still doddering around in a mask come the next US presidential election.

I’m not too sure who will have done most damage in the end result. Climate scientists or medical scientists. While scientists generally have high IQs, this doesn’t necessarily translate into common sense. In fact, evidently, it can lead to tunnel vision. Inconvenient and contradictory information is blanked out, as are broader perspectives. Following the science, is not nearly as sane as it sounds. No surprise then that it’s usually preached mindlessly by lefties.

Finding the Good in Mr Abbott

Not Angry? You Should Be