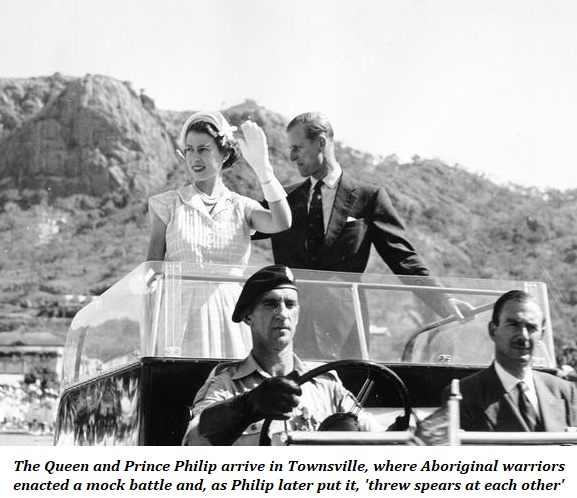 You couldn’t describe my wife, Cathy, as a monarchist, not with that Irish Catholic ancestry on her mother’s side, but she shared my sadness at the death at the age of 99 of Prince Philip, royal consort and a bloke who spoke his mind. Her interest in the Royals is usually confined to weddings and frequent scandals such Prince Andrew’s midnight misadventures and that Oprah interview with young Harry and Mrs Simpson — sorry, Megan Markle.

But as the TV cameras zoomed in for a close-up of Queen Elizabeth recently, she was obviously impressed:

“Mmmm,” I agreed, without glancing up from my car magazine.

“No, look, she hasn’t a wrinkle,” she insisted.

“Well, she’s a Pom, they don’t go out in the sun,” I responded, finally looking up at the coverage dominating a good part of the evening news.

Suddenly our thoughts collided. We were back in February 1954, the year after Queen Elizabeth’s Coronation and her first visit to Australia as Monarch with Prince Philip by her side.

The royals visited 57 towns and cities during the whirlwind 58 days they spent in Australia. They traversed the country by plane, train, ship and car from Cairns in the north, Broken Hill in the west to Hobart in the south, probably missing  little Princess Anne and Prince Charlie back at Buckingham Palace.

“I had to wait in the sun for hours to wave to her at Bundaberg,” Cathy said.

“So did I, all morning and much of the afternoon, at Townsville. It really is a small world.”

My thoughts travelled back to that  long, hot tropical day,  embedded in my mind along with other momentous events such as President Kennedy’s assassination, the moon landing and the day Elvis died.

Thousands of school children were assembled on some sports fields to spell out “Welcome to Townsville” in large letters in the hope that Elizabeth and Philip would glance out the window and be impressed as their plane approached the airport. I hope they did, it was hard work, requiring much marshalling on the part of supervisors and then hours of patient waiting under a scorching sun.

Some kids fainted, but they were probably townies, not part of the small bush contingent from Stuart, like me. We had travelled into the city earlier that morning on the railmotor, then trekked a couple of miles to the mass assembly point.

Some soldiers waiting in line to take the royal salute also suddenly keeled over. 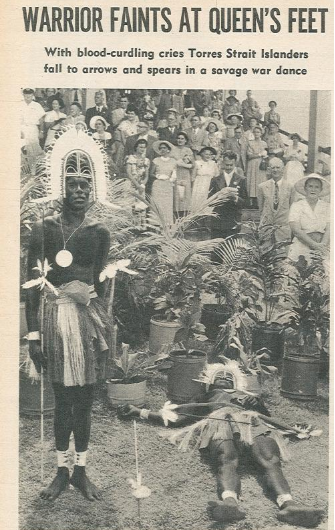 I suppose they supplied drinking water, but I was used to wandering off for the day, drinking out of running creeks or digging holes in the moist sand during the dry season, so I don’t remember being particularly thirsty. Just bored. Finally the Royal couple arrived, young and in their prime, riding in the back of an open Land Rover, waving to the crowd. We cheered and waved back, then the long-awaited entertainment began.

Some Islanders really turned it on and left a lasting picture in a young boy’s mind. Forget Charlie Drake’s old Sixties hit, My Boomerang Won’t Come Back – these Islanders had them whizzing high in the air or spinning towards the crowds before they turned and zoomed back to the thrower’s hand. They peeled coconuts with their bare teeth, then lit fires using a couple of sticks, but the best part was the spear throwing. Two of the participants in that mock melee are pictured as they appeared the next day in the local rag, one somewhat the worse for wear — not as a result of a wound but of the withering heat on that long-ago day.

These days the precision display would be M Rated, or at least come with the warning, “Don’t try this at home, kids.” The spear throwers weren’t mucking about and they used each other as moving targets. They didn’t carry large shields, like some African counterparts, just sticks which they deftly used to flick away the incoming spears at the last possible moment.

Philip had developed a deserved reputation over the years for a wacky sense of humour, which has often been interpreted as foot in mouth disease, but I think on one occasion at least, this was totally unwarranted.

Many years later, during a 2002 visit to a Queensland Aboriginal Cultural Centre, he casually asked an indigenous leader, “Do you still throw spears at each other?”

Shock! Horror! He didn’t anticipate the media storm that remark generated, with accusations of condescending racism and bad taste.  But I think his mind was back when, as a young man in a white Naval officer’s suit, he was entertained by some skilled indigenous protagonists under a hot Townsville sun. If you’re up there reading this, Philip, I was a small part of the letter ‘T’,  the kid with no shoes.

A final thought: There is unlikely to be any concerted campaign to dump traditional ties with the Royals or the Motherland while the Queen yet rules, but that will probably change dramatically if woke son Charles succeeds her. As a friend recently told me, “ If Charles outlives his mother, I’ll become a republican, no matter how bad the nominee for president is.”

I’m not sure I’d go quite that far, not if the candidates include either of a pair of former prime ministers who continue to haunt the political scene like miserable ghosts, but time will tell.

But King Charles ? I won’t be out in the sun, waving.

The Origins of the Current Crisis