The Enduring Racism of Big Cheese

According to reports, Stephen Hagan campaigned for a couple of decades to rid Coon cheese of its “racist” name. He, and others who joined with him, have been successful. Saputo Dairy Australia said that the cheese would be renamed Cheer. Cheer cheese has a ring to it. I imagine highly-paid marketing consultants were brought in to find the new brand name.

What do I think? I have to say that I don’t care overmuch. I have never bought Coon cheese or knowingly eaten it. Nor, by the way, did I ever put a racial connotation on the cheese when I spotted it in the supermarket.

At the same time, whatever you or I might think, Hagan has a right to his view and showed an impressive indefatigable resilience in its prosecution. You might think the company has folded like a cheap suit. But, let’s be magnanimous. It too has the right to change the name of one of its products. Maybe, the company’s head honchos thought it was an opportunity for renewal as well as getting Hagan off their back. Who knows?

In any event, my beef, so to speak, has nothing to do with changing the name of Coon cheese but with not changing the name of Cracker Barrel cheese. Everyone one knows that the descriptor “cracker” is a racist slur against poor white folk. I am not sure how poor you have to be but I, personally, feel terribly insulted and hurt. And my hurt feelings are surely paramount.

And, to boot, the currency of  cracker, which I shall henceforth call the C-word to avoid taking or giving offence, might have a 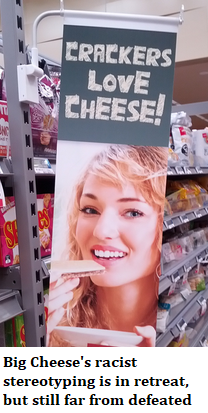 wider target than just white people who are poor. Wikipedia reports Nation of Islam spokesman Khalid Abdul Muhammad referring to Pope John Paul II in 1993 as “a no-good C-word.” And Popes ain’t poor as a general rule, I understand.

Lo and behold, surprise-surprise, I also found that the aforementioned company, guilty of selling Coon cheese, also has the C-word cheese in its stable. And, a word to the wise Saputo Dairy, get the Coon name off your website tout de suite before Hagan spots it.

I am not one to complain without offering a solution. In this case what’s needed is a seamless change to another cheese brand name to take the place of you know what. Let’s find something beginning with C which resonates with Cheer. Charisma Barrel cheese has a ring to it. Though maybe that’s a tad overblown for a cheddar.

I consulted my Roget’s Thesaurus and came up with Chirpy Barrel cheese. However, after deep reflection and soul searching, I thought, hmm, didn’t those slave ships transport rum in barrels for the captains and crews to imbibe? Possibly? Why not drop barrels to be on the safe side.

Chirpy cheese is, thus, my final suggestion. I offer it to Saputo Dairy for free; on behalf of poor white trash everywhere. No need to hand over dollops of dough to marketing gurus. At the same time, I admit to not thoroughly investigating whether ‘chirpy’ has any historical negative racial connotations. Hopefully, there is no character or actor in Gone with the Wind or in those Shirley Temple movies called Chirpy for short or no line which refers to a chirpy chap.

Inadvertency is no excuse. Diligence is absolutely required if we are to cleanse the language and provide a safe environment for those who might feel offended. Don’t risk causing any offence, should be our watchwords.

21 thoughts on “The Enduring Racism of Big Cheese”