The ‘COVID-Normal’ Notion of Liberty 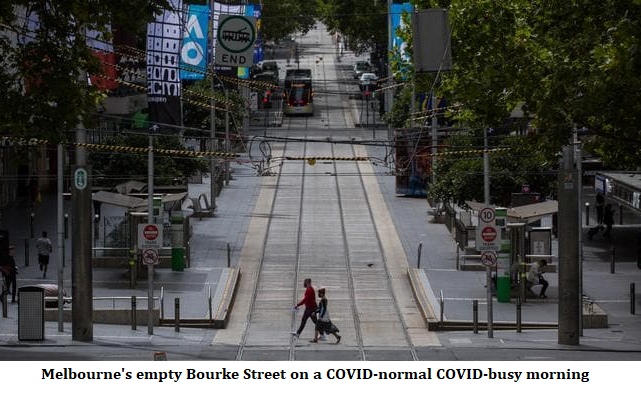 The COVID-19 panda-demic or, as I prefer to call it, the Wuhan Sniffles, is every would-be despots’ dream.  It has everything they could wish for to justify making people into sheeple, many so relieved to be in the care of such devoted shepherds that they bleat their gratitude in unison — just listen to talkback radio or follow the #IStandWithDan crowd on Twitter.  Indeed, taking control of every aspect of daily life inspires such thanks that there are bonus points to be awarded even for monumental stuff-ups. Thus do we see Victoria’s Dan Andrews nominated for a “courage and leadership award” despite the incompetence that has left almost 800 dead on his watch. You couldn’t make this stuff because, well, you don’t need to: it’s already happening.

Most appealing of all is that, at the first sign of the Wuhan Sniffles, you can impose arbitrary and authoritarian lockdowns enforced by your tame police force. Having proven incapable of stitching up a cardinal and investigating the rorts of Labor staffers who wear red shirts, it’s nice to know Victoria’s boys and girls in blue (and Star Trooper riot drag whenever the opportunity arises) are still up to arresting pregnant ladies in their pyjamas and at the beach.

Does anyone really understand the basis of this breathlessly-spread panic and its hourly reported horrors?  More than a year ago, when the Wuhan Sniffles were making their first appearance, a totally unwarranted global media campaign warned that it was going to be worse than climate change, rising sea-levels, acid rain and the ozone hole put together. An invasion by flesh-eating aliens would have been welcome by comparison.

But when you consider real pandemics, such as the Black Death, which killed perhaps 30 per cent of Europe’s population (and recurred regularly thereafter), the CCP’s current gift to the world doesn’t rate at all, and certainly not in low-casualty Australia. Smallpox, eradicated in the last century, probably holds the title of the biggest killer in human history. And we must not overlook the Spanish Flu of 1918-19, which killed 100 million by some reckonings, although other estimates posit less than half that figure. In such company, COVID-19 isn’t the Fifth Horsemen of the Apocalypse; indeed, it doesn’t even get into the mounting yard.

So, let’s look at a couple of statistics and then ask ourselves in this age of Google and instant access to knowledge why so many have been fooled by political elites and their totalitarian aspirations. What, for starters,  is their real aim? The US is a good place to start, habitually held up as the ultimate basket case when Donald Trump occupied the White House, although less so since January 20. With an election looming, COVID proved both a very useful brush for blackening his reputation and, vital to Joe Biden’s ‘victory’, altering voting laws.  As of January 15, 27.5 million US cases had been reported, with 481,000 deaths of those returning positive tests, which is a 1.75 per cent fatality rate.

These numbers prove how dangerous the CCP virus is, do they not? Well, not really. They do demo 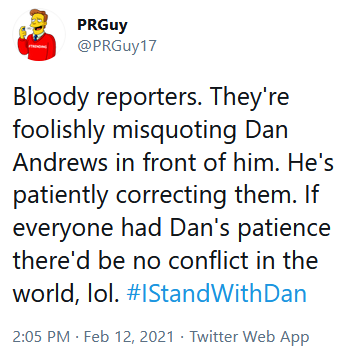 nstrate health services suck and state governors likewise, although not at telling whoppers. The administration of New York’s Andrew Cuomo has just been exposed as having doctored and/or hidden his state’s death statistics, in part to avoid giving Trump a political cudgel and, of perhaps greater import, to conceal the fact that his policy of putting COVID-infected patients into nursing homes, rather than hospitals, claimed as many as 30,000 lives. And it wasn’t as if all the wards were full. Trump sent a 2000-bed hospital ship to New York City, which Cuomo made a deliberate point not to use. Making a thorough, bloody mess of things is fine and dandy if you’re a Democrat. Far from opprobrium, you’ll likely get an entertainment industry award.

Fortunately, the panda-demic has demonstrated remarkable curative properties against other diseases, with influenza and some other causes of death witnessing a statistical plunge.  Who knew COVID could cure so many other blights on humanity?  Clearly, one would surmise that its 481,000 deaths will lift national mortality in the US? Well, yes, sort of. The Centres for Disease Control will not have compiled its official mortality numbers until the end of this year, but the figures for 2019 are finalised. They show 8.7 people per 1,000 died of all causes. The year before, 2018, it was 8.6 deaths per thousand. Using the recent estimate of the 2020 population from the US Census Bureau, the death rate for 2020 would be 9.7 deaths per 1,000. That makes for a single additional fatality per thousand in the year of the COVID plague. For added perspective, 2020’s slight increase will match the death rate for 1949, a year the US managed to survive without mass hysteria. Globally, John Hopkins University reports that 108 million positive tests have produced a fatality rate of 2.2 per cent.

Terrified now?  Well don’t be, as it is not the world that concerns us but our own little patch of paradise here in Australia.  As at February 13,  there had been 28,887 positive tests and 909 deaths (once again, with, not necessarily of, the Bat Soup virus).  The fatality rate is therefore 3.1 per cent.  If we thought the US health system sucked at 1.75 per cent, what does that say about our medical capabilities?  Well, not much actually as the vast majority of those recorded as COVID deaths were aged in their eighties, afflicted with end-of-life medical conditions and various co-morbidities, and likely soon to depart this life in any case. Fling the ‘granny killer’ slur if you will, but it as hollow and irrelevant as that, ho hum, “judicial inquiry” set up  in Victoria to make sure the Premier came out smelling, if not like a rose, then certainly no worse than a recently scrubbed public restroom.

But what of the deaths given prominence by a yapping media — you know, men in their forties and even a youngster of no more than thirty-odd years. Look a little deeper and you’ll find the former was in fourth-stage cancer treatment, while the younger man was a drug addict.

Our politicians praise themselves for saving us from ourselves ‘as a matter of public safety’[ii].  Apparently Australian adults cannot be given real facts and then trusted to make decisions concerning what risks they are willing to take.  We have 25 million-plus people in this broad, brown and gullible land, which means that 0.1 per cent of the total population tested positive for Covid-19 and 0.0036 per cent has died[iii].  That’s not a pandemic, or even a panda-demic, not in my thesaurus anyway.

Let’s just accept that we have fumbled and bumbled, and are seemingly determined to continue fumbling and bumbling, with nobody knowing how to draw the curtains on tragedy recast as farce. Apart from pinning all official hopes on a vaccine, there are no clear notions amongst our betters on how to end what amounts to a nationwide fit of self-lacerating masochism. Just look at recent developments in Daniel Andrews’ sick joke of a state. A positive test — yes, just one — and the shops are ordered shut, travel restricted, borders closed, businesses ruined and morning TV once again dominated by the Premier skiting in the limelight about his luminous leadership.

When will we know we have won?  Is it some sort of control over the infection rate,  or is it the complete eradication of the virus — or is it that victory will never be declared and the fetters on traditional liberties remain iron-bound?  My bet is on the last option, as I have read 1984 and Animal Farm, which rolled off the platen of Orwell’s typewriter as warnings but are now instruction manuals. Viruses mutate, as this one will continue doing, so there will always be another variant to reset and restart the alarms and lockdowns all over again.

Two statistics that interest me when considering the dangers of the Wuhan Sniffles are that 3,571 people have suicided (four times the number of COVID deaths and at generally much younger ages) and the annual influenza toll of 4,363 (4.79 times the number of Covid) deaths).  Why are we not locked down because of influenza, or would that quintuple the suicide rate?  Then there the 510 people a week who die from heart disease, (736 if you include strokes). Yet this virus sees police used as enforcers and your neighbours recruited as informers. We are either supine proles being led by asylum-ready politicians (both appear possibilities) or there is another agenda. I vote for the latter.

Unlike smallpox, which could be eradicated as it was a human-only disease, the COVID virus cannot be eliminated as it is also hosted by other species.  Maintaining an eradication strategy in Australia (and globally) means deliberate economic impoverishment, endless snap lockdowns, disruptive and random travel restrictions, panic buying and rationing and, of course, punishments for assembling in unapproved numbers. We must endure curbs on free speech, while criticism of government brings visits from the police, sometimes with battering rams.  I have been to countries where these controls are the norm and where “If you want a picture of the future, imagine a boot stamping on a human face — forever” as Orwell put it.[v]

So, the multiple vaccines for Wuhan Sniffles-19 were the rescue and redemption we were all to hold out and sacrifice for, but then along came the mutated ‘British Super strain’. No doubt readers will have noticed the subtle shift in politicians’ pronouncements: initially, the vaccines were to cure the disease and we could revert to normal lives and lifestyles. Now, though, the line is that the vaccines might not banish the disease but merely make it less likely we will end up in hospital. If the promised return not to normal but only to “COVID normal” and “post-COVID normal” doesn’t inspire the shivers you haven’t been paying attention. Our elites are deliberately destroying our economy and future by creating an unjustified concern over this statistically insignificant 0.1 per cent killer.

Big Brother knows you are reading this and will be arriving very soon to correct your thinking. Please reaffirm your obedience before the clock strikes thirteen.

[i]  Everywhere the Al Gore goblin goes to preach his global warming mantra – it has a cold spell or it snows.

[ii]  The favourite phrase of Robespierre justifying his personally sending 522 people to the guillotine as ‘enemies of the people’ before experiencing it himself when his fellow revolutionaries decided he was a threat to them.

[iii]  The PCR Test used for detecting the RNA remnants suspected of being part of the Coronavirus is only about 70% accurate, so it is probable that the true figures are 0.7 of the totals above.

[iv]  “To promote greater equality of power, wealth and opportunity; the value of collective action and public service; an accountable, tolerant and active democracy; citizenship, liberty and human rights; sustainable development; and multilateral international cooperation”  In an article published in The Guardian on 14 February 2008 (following the apology offered by Australian Prime Minister Kevin Rudd to the “stolen generations”), Geoffrey Robertson criticised Fabian socialists for providing the intellectual justification for the eugenics policy that led to the stolen generations scandal.  Squaring the conspiratorial circle.

5 thoughts on “The ‘COVID-Normal’ Notion of Liberty”

Better Than a Book-Burning