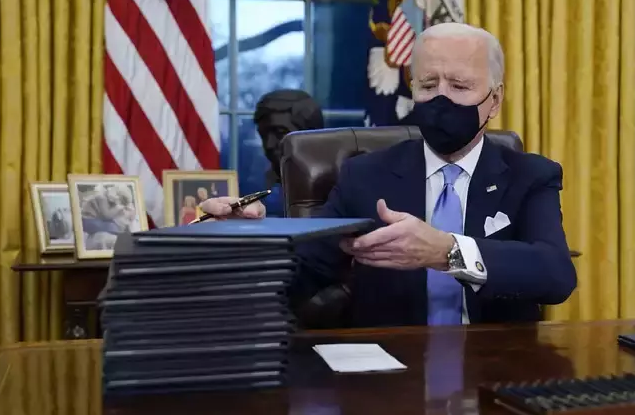 As expected, President Biden wasted no time overturning the Trump legacy with many Executive Orders. Since his inauguration on January 20, ther new president has signed 30 Executive Orders, 19 on the first day of his presidency alone.

Executive Orders are presidential directives addressed to federal authorities subject to congressional and judicial oversight. Perhaps the most famous order is the Emancipation Proclamation of President Lincoln on January 1, 1863. Franklin D Roosevelt signed 3522 Orders, compared with President Trump’s 212 Orders. Some presidents have used this discretionary legislative power sparingly, but certainly since the 1980s, the signing of Orders on their first day in office has provided incoming presidents with an opportunity to destroy the legacy of their predecessors.

There are at least two reasons why this legislative approach to overturning a predecessor’s legacy is a disturbing development. One reason relates to the legislative authority of the president to adopt these measures. Although there is no doubt that, in accordance with Article Two of the US Constitution, the president possesses some degree of discretionary legislative power which usurps the legislative privileges of Congress. Hence, it is an executive power that should be used sparingly.

The other reason relates to the specific circumstances involving the ascendancy of President Biden, who says his Executive Orders are aimed at unifying the country after the divisiveness and confrontations of the Trump era. However, there is evidence that these Orders, rather than unifying the country, will only inflame the Trump constituency, which is sizeable. Trump supporters may well feel alienated, disenfranchised, and neglected.

It could be argued that the hurried rejection of the Trump legacy discloses an unwillingness to differentiate between the flawed character of President Trump, on the one hand, and the substance of his Executive Orders on the other. As to the former, Trump did not have the right temperament to become a great President, and his views and actions were conveyed to the public in a belligerent manner. But Trump’s character should not necessarily overshadow the fact that some of his Executive Orders were defensible and supported by many people in the United States.

It may thus be useful to briefly revisit some of Trump’s Executive Orders.

Trump signed an Order banning immigration from some designated mainly Muslim countries. Biden’s National Security Advisor, Jake Sullivan, called the so-called Muslim ban “nothing less than a stain on our nation”. However, according to the Trump Administration, the ban was a necessary measure to prevent terrorist attacks on American soil. The ban, which was declared constitutional by the Supreme Court in 2018, also carefully targeted countries which were known to support terrorism. One may well disagree with Trump’s blanket ban of all applicants from these countries, instead of using an individual approach. But criticising the ban on the ground that it is an odious example of xenophobia and religious discrimination is simplistic because it fails to consider the real or perceived threat of state-sponsored terrorism.

The immigration policies of the United States will be an important battleground during the next four years. This is because President Biden, by Executive Order, has already removed caps on refugees and asylum seekers. He is also providing a pathway of eight years to citizenship for illegal immigrants.

In addition, a Biden Executive Order provides for the United States to re-join the World Health Organization, and the Paris Agreement on Climate Change. The President also signed an Order to ensure that all federal agencies deliver an action plan on racial equity within 200 days to address any disparities in policies and programmes.

Another Executive Order created the new office of COVID-19 Coordinator, who would report directly to the President. It is doubtful, however, that the creation of a new bureaucracy is an appropriate and useful response to the challenges posed by the pandemic. It is also expected that the President’s Order to provide a US$1.9 trillion COVID relief package will adversely affect the economy in the long run. While it is easy to print money, it is foolish to believe that it will not result in inflation, fewer employment opportunities, and enormous debt levels. While helping working families financially is a compassionate response to the COVID challenge, a proposed expense of this order should be reviewed by Congress as a matter of priority.

Parts of the American electorate will dislike Biden’s reversal of the ban on military service by transgender Americans, and his unblocking of federal funding for nongovernmental organisations that provide abortion services abroad.

The hurried nature of the signing of Biden’s Executive Orders creates the impression that they were adopted, at least to some extent, for the purposes of revenge. Revenge is a powerful human motivation which, however, is based on a misconceived belief in moral superiority. Joey Garrison and Courtney Subramanian in USA Today argue that, “The swiftness is meant to demonstrate urgency to turn the page on a divisive four years under the Trump administration”. While they provide a reason for the “swiftness”, it is precisely the overturning of the Trump legacy that will exacerbate the sharp divisions already existing in American society. To treat the last four years as an aberration is a serious mistake because it will ensure that conflicts and misunderstandings  continue to fester.

The failed second impeachment trial of President Trump will not help because that too will be viewed by his supporters as an egregious example of revenge. Common sense suggests that impeachment should only be used to unseat a sitting president, not a former president. Perhaps the real reason for impeaching President Trump during the dying days of his presidency was to ensure  he would not be able to pardon himself. Indeed, in accordance with Article Two, Section Two, Paragraph One of the Constitution, an impeached person cannot be pardoned by the President.

Executive Orders are often arrogant expressions of the deemed superiority of an incoming administration. If so, Biden’s Orders may not lead to stability and unity, but instead may well result in greater strife and disunity which is the opposite the President claimed intention.

Professor Gabriël Moens AM is an Emeritus Professor of Law at The University of Queensland, and author of a novel on the origins of the Covid-19 pandemic, entitled A Twisted Choice

Cut Your Throat with a Stab in the Back