Language, Crime and Trial by Headline 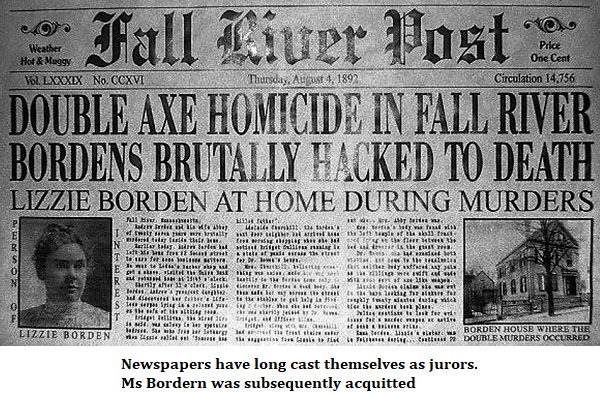 Imagine if you are the subject of a rape allegation and you, your family and friends and the broader community see the frontpage headline in the Weekend Australian: “Adviser Raped Second Woman.” True, the headline was preceded by a smaller-print caveat that it is an allegation and, I understand, other editions put the word ‘raped’ in inverted commas. Nevertheless, the bold headline takes the eye. I mention this to illustrate that the way language is wielded matters; particularly when it comes to crime and allegations of crime.

I know nothing of the truth or falsity of the accusations of rape. I wasn’t there and I don’t have any video tape. But, so far as the reporting goes, it seems that both women had been drinking. As an aside, I wonder, in all this talk about culture as it applies to young women, whether the real culprit around Parliament House is a drinking culture.

I know about a drinking culture. I worked for a bank in the 1980s. Wiped myself out too many times to care to count; made the one to two rebuffed inept advances. Maybe saved from getting into more problematic situations by my lack of suavity and such.  Thank you, God.

My own personal experience though was that women didn’t participate in excessive drinking. Of course, my experience only goes so far and I wouldn’t doubt that the odd inebriated woman might have been found within the halls of banking’s social circles. Still, it is not wise for women in social-cum-work gatherings to drink to excess. Most women know that, as they should and should have been so warned by their parents. The world brings risks for young women which are different from those it brings young men, however much feminists might want to wish differences away.

Back to the allegations of rape and to language. Allegations must be tested. Many allegations are shown to be false. Throughout, until a guilty verdict by a court, an accused is entitled to the presumption of innocence and due process.

At this stage, the two women (now three, I understand) are complainants; they may be victims but being accorded that description is not yet appropriate. Sometimes the fact of a crime is evident; often times the fact of a crime having been committed is not nearly clear cut. In the case in view, did rapes take place or did they not? First a crime has to be established and only after that can someone be accused of perpetrating the crime and only after being convicted described as the perpetrator or culprit.

There is a world of difference between a complainant and a victim. Yet when crimes of a sexual nature are being alleged the term victim is often thrown about. Implicitly this suggests that a crime has indeed been committed and someone, often known, is the culprit.

Similarly, there is a difference between proof and evidence. From the OED, for the edification of journalists and others. Proof: evidence establishing the fact or the truth of a statement. Evidence: information indicating whether a belief or proposition is true or valid.

I read many accounts of President Trump claiming “without proof” that the US election was stolen. It’s hard to know what to do with reporting like this. Assuming that the reporters are morons is one answer. Assuming that they are hacks tendentiously pushing a line is another. A bit of both is probably nearer the mark. We know that they are not objective and intelligent. Mind you, when it comes to Trump, objectivity and intelligence jump out the window.

There is plenty of evidence of electoral malfeasance in the last US election. Evidence! Whether this amounts to proof of the election being stolen on, say, the balance of probabilities or beyond reasonable doubt, is another (much more complicated) matter. Only courts can determine that. The Supreme Court was given the best opportunity to test the evidence and squirmed out of hearing the case. So, we don’t know.

We do know that Trump had evidence for his claim. And to say he didn’t have proof is rather like saying my black eye is not proof that I was punched in the face.  But it is evidence, numbskulls. And if you examine my neighbour’s damaged right hand, I think you will find that I will be able to prove my case beyond reasonable doubt in a court. Anyway, enough of that fictitious account of my altercation with a neighbour. But, by the way, he says I hit him first and his action was in self-defence.

There you go: evidence and proof; complainant and victim. How confusing it all is for today’s muddled minds. Imagine the struggle of tomorrow’s minds born of gestational and non-birthing parents.