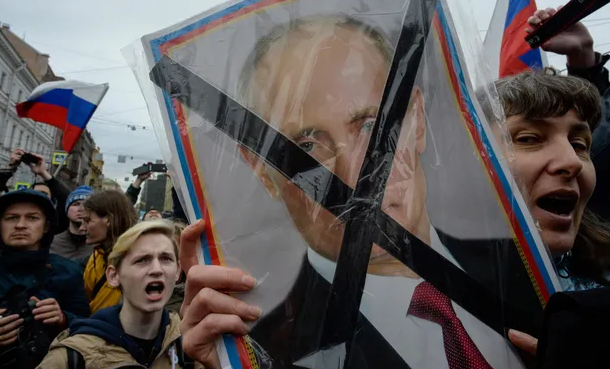 For those of us who had the misfortune to be born in the former USSR, the recent happenings in Russia are as fascinating as the collapse of the Berlin Wall, the end of the Warsaw  Pact and the regained independence of the USSR’s peripheral republics. Today, watching the TV footage of defiant and mostly young Russians turning out to protest the Putin regime and be arrested in their thousands, one cannot help but feel admiration for their bravery, sympathy for their cause and a deep chill at the thought of what might happen next.

That so many Russians have taken so eagerly to the streets, not only in Moscow but in regional centres across the country, braving bitter cold and a threat of violence by the hated siloviki militarised police, is unprecedented. Their movement’s leader and inspiration, Alexei Navalny, has just been sentenced to three-plus years on the most ridiculous of trumped-up charges. He was denied the help of a lawyer, and his supporters are being similarly treated — arrested in daily tranches for the threat their demands for democracy and reform pose to the regime. Of the matters on Vladimir Putin’s mind, the challenge Mr Navalny represents must right now be foremost. When more than 150,000 protesters fill Moscow’s streets, braving tear gas, water cannons and truncheons, the man who inspires such courage must be taken seriously.

Immediately upon his January 17 return to Russia from a Berlin clinic, where he was recovering after Putin’s henchmen almost succeeded in assassinating him with the Novichok poison, Navalny was dragged before a kangaroo court which ordered him detained him for 30 days pending trial for allegedly violating the parole terms associated with the suspended sentence he received in 2014 after being framed on charges of fraud.  That conviction, assailed by the European Court of Human Rights as “arbitrary and manifestly unreasonable”, saw him denied a lawyer’s presence in court. Nor were members of the foreign and non-state media allowed to observe Putin’s version of ‘justice’ in action. Early in February, Navalny was hauled before one of Putin’s hack judges court, convicted and sentenced. Given that he is in custody, and in the light of the failed attempt on his life, the gravest fears must be held for his survival.

Navalny’s real crime was having the audacity to upload to YouTube a two-hour video, “Putin’s Palace”, charging that it was built for him by grateful cronies who grew rich thanks to his patronage. In a country where at least half  the households still lack indoor plumbing, Putin’s Palace was revealed to boast not only an “aqua-disco” and basement ice hockey rink, but furniture of obscene cost and, the cherries on the cake, gilded toilet brushes said to be worth £700 apiece. This explains why demonstrators have been waving toilet brushes even as the police, sarcastically branded “cosmonauts” for their  helmets and body armor, respond with clubs, electric stun guns and indiscriminate beatings.

The protesters’ most popular chant is “One for all, all for one” as they lambast Putin’s circle of “crooks and thieves” and demand his abdication, which explains why state TV channel does not deign to mention them at all. Instead, a familiar theme, the broadcasts inform viewers that the West is at the very brink of societal collapse, which conveys the no less familiar message of their own good fortune in having Putin at the helm. The rest of official programming can generally be expected to hail the virus-vanquishing success of the home-grown Sputnik COVID-19 vaccine, developed at Putin’s direction, endless reports of Putin appearances and his words of wisdom, and upbeat promises of a better future under his heroic leadership. For human interest’s sake, no news broadcast is complete without heart-tugging requests to help out this or that unfortunate child, all destined to die unless public donations arrive to purchase medications and treatments. That the state has failed to protect the health of its citizens is never mentioned.

Are we witnessing the beginning of the Putin’s regime?  Alas, I don’t believe so.  Are we witnessing a sea change in the Russian people’s perceptions? Could be, but one shouldn’t be too optimistic. Many Russians still feel the humiliation of the USSR’s collapse, and they have enthusiastically supported aggression against Ukraine and Georgia, plus the Crimea annexation. In a society as deeply conservative and isolated from the wider world as is Russia, change is possible but there can be no expectation of reform coming fast enough to satisfy the pro-Navalny forces. They don’t see any worthwhile future for themselves, not in a country where the rule of law, as demonstrated by the Navalny “trials”, is a sick joke, and where corrupt and incompetent officialdom is incapable of delivering basic services to ordinary people. No wonder that almost half of the young people quizzed by pollsters say they would emigrate if given the chance.

The regime’s decision to persecute Mr Navalny might — just might — be the final straw. Yet there are cultural counterforces also at work that make an eruption akin to, say, the Arab Spring unlikely. A century later, the collective memory of the bloodbath that was the Russian Civil War is so embedded in public consciousness that it verges on the genetic. Recognition of the bestial violence punctuating Russian history is one powerful reason why today’s demonstrators have politely declined to respond in kind to police attacks and provocations.

To maintain power a tyrant needs only a relative few armed loyalists who aren’t shy about pulling triggers.  Putin has 340,000 of them under arms and what amounts to his personal command, a massive praetorian guard if you will. They are the best paid, the best equipped and the best trained troops in the country, separate from the run of the mill armed forces.  Known as the rosguardia, they are specifically trained to quell civic disturbances. Still, despite common knowledge of these very dangerous regime loyalists and their willingness to use arms, an unprecedented number of people have decided to take their grievances to the street.

This is, undoubtedly, Mr Navalny’s great achievement — and Mr Putin’s political blunder, for he has given his opponent the gift of the world-wide recognition. Had he been allowed back into Russia unmolested the demonstrations would not have happened. The demand for Navalny’s freedom unites what had formerly been a tame and hopelessly divided opposition.

Mr Putin now has very little room to maneuver, especially considering that Navalny is one of the candidates for a Nobel Peace Prize. He can set the man free, or he can unleash his goons to mount another attempt on his critic’s life.

Whichever course Putin’s chooses, the world beyond Russia is now fully aware of Navalny as a 24-carat hero and Putin as a tyrant who rules the biggest country the largest surface area on the planet by threat and force of arms. I cannot see any circumstances in which these perceptions change. As to what the immediate future will bring, any realistic appraisal will incline to the bleak side.