Trump, More Sinned Against Than Sinning 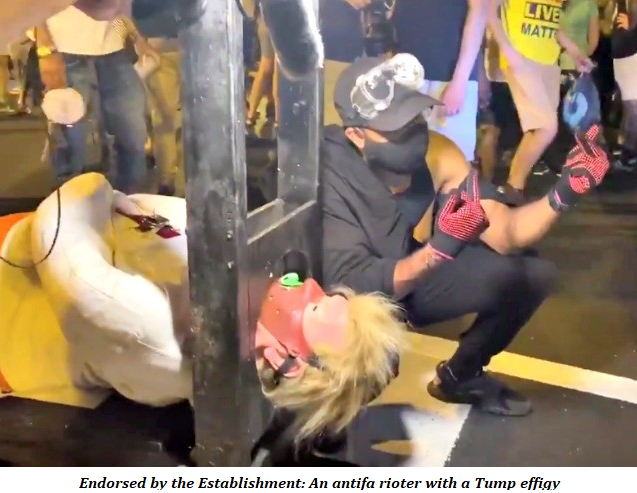 Many people are responsible for the riots on Capitol Hill in Washington D.C. One of them is Donald Trump. Loose lips sink ships, as they say. Trump talked too much. There’s a reason why politicians speak out of both sides of their mouth – with forked tongue, as Native Americans say – they’re afraid to say anything definitive that voters may take literally. Trump bucked this trend and we can now see the danger of extemporaneously speaking your mind.

The public, for all their talk of wanting direct, honest politicians, can’t handle the truth. Somewhere between the rehearsed platitudes of Obama and the unscripted bluntness of Trump is the rhetorical ideal, but you need a Churchill to marry the necessary gravitas and spontaneity. Other people, though, smiling assassins, as they’re known in the vernacular, are also responsible for the chaos in Washington. As the Bible says: ‘Whatsoever a man soweth, that shall he also reap’. The Republicans and the Democrats are reaping what they sowed.

The catalyst for the protest on January 6, the day the Senate ratified the Electoral College, was the presidential election in early November, but the causes of the protest go back to the day Trump announced his candidacy to become president. From that day forward, the Establishment acted in every way to undermine, frustrate, and destroy his presidency. It’s one of the most extraordinary stories in modern American political history. And while the ‘resistance’ or the Establishment — it’s hard to tell which is which in this ill-begotten tale — performed their deeds in plain sight, they also gaslighted the whole world. Then, with the chutzpah of chutzpahs, they denied prima facie evidence of their own malfeasance and corruption, and described anyone who questioned their narrative and tactics as insane or stupid. The hypocrisy was breathtaking. Although some of their followers, to be fair, are so stupid they gaslighted themselves.

The larger question, though, is what did people expect when a democratically elected president is subject to a torrent of abuse, of unrelenting mainstream media lies, false accusations of collusion with Russia, and an impeachment based on a gossamer-thin excuse to remove him from office?  Did they expect that nobody would become enraged at what many people viewed as the Establishment thwarting a democratic mandate? Did people really believe that nobody would notice the groundbreaking hypocrisy of the elites or the fact that the establishment was closing ranks against an outsider, one who was viewed by many voters as a tribune of the people? What did people expect when they witnessed Democratic Party politicians defending Antifa and Black Lives Matter, with Joe Biden, for example, refusing to condemn the burning of American cities, saying that Antifa is just “an ‘idea”, all the while blithely ignoring the wanton destruction? What did people expect when Kamala Harris urged people to donate to the legal funds of the rioters? What should people think when Nancy Pelosi said there was ‘no question’ that the 2016 election was ‘hijacked’? Were people to take them at their word or ignore what they said because it was a ‘debate’, as Kamala Harris excused herself after calling Joe Biden a racist and then signing on as his vice-presidential pick? What did people expect when the Democrats said that the Russians had manipulated the voting machines to ensure Trump won the election? What did people expect when there is evidence that the Justice Department, the Federal Bureau of Investigation and the Central Intelligence Agency, among others – the security apparatus of America, in other words – were involved in a plot to undermine Trump’s presidency, and which even Barack Obama discussed in the Oval Office? 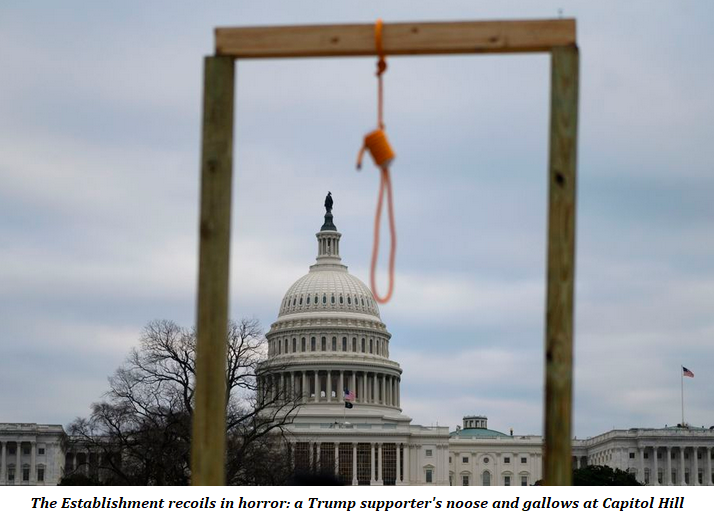 It’s not whether anything illegal happened, it’s the perception of criminal acts that matters here. (The Durham Report into this possible scandal is expected later this year. One member of the FBI has already been jailed for altering a document that was used to obtain a FISA warrant which authorised phone taps on Trump associates). What did people expect when Trump’s nominee to the Supreme Court, Brett Kavanaugh, was accused of rape and where the evidence of his guilt relied on a vague ‘believe all women’ mantra — except when Joe Biden was accused of sexual impropriety and suddenly all women were not to be believed? What did people expect when the mainstream media relinquished any standards of objectivity and repeatedly published stores that were lies, like the hit piece, which has become a self-evident truth it’s been told that often, that Trump praised both sides at Charlottesville, when he did no such thing, or that he encouraged people to drink bleach? What did people expect when weaponised accusations of misogyny, racism and classism were hurled at Trump without any evidence to prove their accuracy? All of which were rationalised by new and politicised definitions of normal behaviour and psychological traits that have been hardwired into human beings over aeons of evolutionary time. If Trump is guilty of these sins then everybody you’ve ever met is guilty of them too, including your father and your grandmother. What did people expect when the Big Tech’s Twitter, Facebook, Amazon and Google censored and shadow banned news stories favourable to Trump? What did people expect when Twitter blocked the New York Post from using its service to promote stories about Joe Biden’s son, Hunter Biden, just before the election, stories which showed Hunter Biden trading on his family name and giving a cut of the profits to the ‘big guy’? Polls after the election proved that man voters were unaware of the story, and that if enough voters knew about Hunter Biden’s corruption before the election, Trump would have won.

Which brings me to the presidential election. Justice must not only be done, but must also be seen to be done. This is where most commentators, both honest and blindly partisan, are wrong in their analysis of the riots in the Capitol building. The issue was not whether fraud was widespread in the election, the issue was how government officials and relevant institutions dealt with legal challenges to the election result. The answer is they didn’t. Every lawsuit brought by Trump, by multiple states, or by people who were concerned about the election was rejected on procedural grounds and not on any evaluation of the evidence. What is important is not whether American democratic institutions worked, they did, as anyone with a shred of intelligence knew they would, but the perception among the public that something was suspect about the elites’ reaction to citizens exercising their democratic rights. This was the proverbial straw that broke the camel’s back for a minority of Trump supporters, those who disgraced the Capitol by rioting in its sacred halls. The rioters believed that their democratic rights had been quashed by the establishment’s antipathy to Trump.

Breaking democratic norms, or, as Barack Obama says, ‘constitutional norms’, comes in many forms. Trump has broken many shibboleths about the role and behaviour of government, but the establishment opposition’s breaking of constitutional norms make Trump look like a rank amateur. Even committed liberal democrats like myself became suspicious when the pattern of disingenuous behaviour by the Establishment was so overwhelming in its ferocity and magnitude that it became impossible to ignore.

Trump has earned a place on the tumbril, but he is not alone. Many of his detractors should be standing beside him. Or, at the very least, they should remember their own behaviour and rhetoric before advertising their hypocrisy.

To put this in perspective, using their own logic that ‘riots are the voice of the unheard’, what did the left-wing cultural hegemonic Establishment think would happen when they broke, while posing as moral arbiters of the great unwashed, every constitutional and democratic norm over the four years of Trump’s presidency? What we’ve witnessed from the Establishment is the greatest rejection of democratic rights in modern political history. As the Bible says: ‘By their fruits shall ye know them’.

21 thoughts on “Trump, More Sinned Against Than Sinning”