No to be England Now That COVID’s There 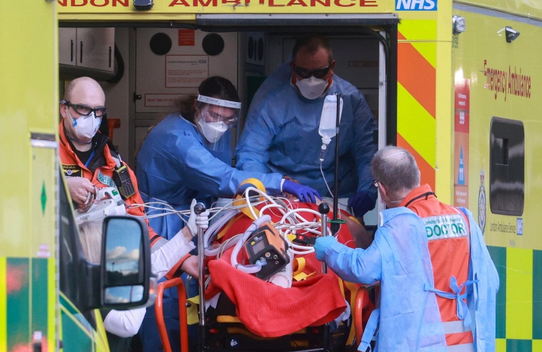 As the UK passes the sad milestone of 100,000 officially gazetted deaths from COVID-19, Quadrant Online readers waiting patiently for their vaccines might be interested in an update. Let’s begin with Sir David Spiegelhalter, Professor of Statistics at Cambridge, who says it is more likely 120,000 Brits have actually been killed by the China virus. How so? Well, as seen so often in the past 12 months, confusion and mixed messages seem to be prime symptoms of this virus.

COVID is now estimated to have taken seven months off average life-expectancy in the UK — or perhaps it’s a full year, depending on which report you are inclined to go by, with the largest single tranche of casualties being elderly men, who appear to have double the death risk of elderly women. The COVID virus, according to the latest research, uses a protein up-regulated by testosterone to gain a foothold. And why does Britain now have the world’s highest COVID death rate? By the reckoning of UK Pensions Minister Thérèse Coffey, who recently became the target of much abuse for telling the truth, the greatest of political mortal sins, when she said on ITV’s Good Morning Britain that it was due to so many Britons being elderly, obese or both. Sadly, it seems she is right. The average age of patients with COVID now in UK Intensive Care is 60. But the vast majority of these people have pre-existing medical conditions that make COVID far more deadly. Diabetes, heart disorders, weakened immunity and damaged lungs are just some of the risk-enhancers prominent on the clinicians’ lists.

Outside the intensive care units, older people are also being carried off by COVID, usually expiring in standard hospital wards or nursing homes. London’s largest hospital, St George’s at Tooting, recently reported 50 per cent of its beds are occupied by COVID cases. That has vastly reduced the room for those who happen to be sick with something else, although rates for other disease are fortunately down.

If you’re elderly here and decide to get tested for COVID, it’s a bit of a slippery slope. Once you get a positive result, you’ll be monitored at home via phone calls with your GP, and you may be given a pulse oximeter for checking that you’re not in need of extra oxygen. If your cough worsens, a well-meaning somebody will summon an ambulance on your behalf. Often, outside the residences of presumed COVID patients there are two ambulances plus a police car.

Why the police? Well, say you live with a spouse or kin, are sick with COVID and about to be taken to hospital. It may well be the last time family members see you alive and can share the warmth of a hug. When the ambulances arrive — the first to check your condition and the second to transport you — eruptions of heartbreak are common. The police presence helps keep the peace when things become particularly emotional and the ambulance service’s paramedics need protection.

Once in hospital, an elderly person likely will get oxygen and steroids. This is medicine out of the 1950s,  steroids being a twin-edged sword. For COVID patients with severe lung inflammation, steroids help. For patients with less severe symptoms, steroids can worsen things, partly by suppressing immunity, and partly by making patients’ other illnesses — diabetes, hypertension, to name but two — that much worse.

If you’re elderly and deteriorating in hospital, you’ll be asked about your wishes. The subtext is for the patient to declare he or she would prefer not to be alive. Junior doctors have been writing in newspapers about how these patients are routinely given morphine and benzodiazepines to ease them into a less unpleasant death. Euthanasia seems to be one way the UK’s National Health Service (NHS) has been able to just about cope — by freeing up beds occupied by struggling and elderly COVID patients so that more struggling and elderly patients can be moved in.

Although Prime Minister Boris Johnson and the NHS CEO have recently mentioned the availability of more powerful medicines to treat COVID-related lung damage, such medications have seemingly been little used on NHS patients whose lungs are just starting to deteriorate, when therapies might be expected to bestow their greatest benefits. Sadly, and perhaps inexplicably, most clinical trials have required patients to be on the verge of ICU admission. The newer medicines that can rapidly block lung inflammation were developed for other  disorders — forms of arthritis, bowel disease, blood disorders and the like. General medical staff and those working in ICUs know little about them, and the NHS, never wanting to spend its money, wasn’t quick to bring them up to speed. Some will tell you we have only recently found out that these inflammation-blockers work to save COVID patients, yet the first reports of their success emerged all the way back in April 2020. Earlier use might have saved many thousands of lives.

Which brings me to the vaccines. First, you should know that the seemingly most effective vaccine (the Pfizer one) causes pain in the arm (not immediately, but for a week  after), with fever and a more generalised aching being widely reported. For most, this is a small price to pay for protection. However, in frail and elderly nursing home patients who are vaccinated, often without their direct informed consent due to dementia, reports suggest vaccination can be followed by general deterioration and death, as was first reported by Norway. That country’s chief medical office, Sigurd Hortemo, put it this way: “We cannot rule out that common adverse reactions, such as fever and nausea, may contribute to a more serious course and fatal outcome in some frail patients with severe underlying diseases.” That appraisal casts the footage broadcast on UK TV of a bedridden and demented 105-year-old nursing home patient receiving a COVID inoculation in a decidedly less cheerful light.

For those on the younger end of Britain’s elderly demographic, vaccines are showing signs of being a game-changer. Most will develop COVID antibodies that, while perhaps not stopping them catching the disease, may well be enough to ensure they don’t die of it, at least not during the effective period over the next year or so. We’ll just have to wait and see how long the protection lasts and if it needs to be renewed with annual update injections.

Meanwhile, interesting US research detailed in the Journal of the American Medical Association has shown that older people who don’t develop severe COVID often have pre-existing antibodies, this despite no known prior COVID infection or vaccination. How come? Perhaps Otto von Bismarck can answer that. All you get from a young children, he quipped, are colds and their mother’s age. Up to 10 per cent of the colds kids pass on to parents and grandparents are due to weaker, distant-relative-of-COVID coronaviruses, and it is these which may well provide some measure of, if not immunity, at least protection. If you have been exposed to these cold-causing viruses, that might — emphasis on might — have been enough to see your case of COVID progress only to the mild stage and no further.

The issue of whether to give one or two doses of vaccines is really a non-starter. If you want to get huge numbers of people vaccinated quickly, you have to limit them to one dose. And the booster dose (12 weeks later now) if reported to work better if delayed. Britain’s healthcare workers are being vaccinated first and fast, but many other “essential” workers who continue to commute and mix widely in the community are at risk of spreading COVID to others, even if asymptomatic.

This question leads to the final — and morally most-concerning — issue of the UK’s COVID-19 ordeal. The UK Telegraph recently reported that up to one in six people admitted to hospital with ailments other than COVID went on to catch the disease while in the supposedly protective care of NHS hospitals. Of these, many with underlying illnesses severe enough to need hospital care may well have gone on to die of COVID.

So, the UK NHS which every Brit is urged to clap and applaud once a week, further being told they should be more proud of their nation’s medical system than any other aspect or achievement of modern Britain — has quietly been killing off people who arrived with non-COVID illnesses. These hospital-acquired “nosocomial” cases of COVID have spread by other patients (by sharing toilets, for example), but also from NHS staff themselves. The Royal College of Nursing recently pleaded again with the UK government to upgrade the often inadequate personal protective equipment (PPE) to help reduce hospital spread of COVID — something, clearly, that does not warrant weekly applause.

When the dust settles from COVID-19, the preventable tragedy of infecting vulnerable people in hospitals with COVID may be seen as one of its most regrettable aspects. One year ago, Chinese health authorities in Wuhan already understood this and set up entirely separate hospitals, with high-level “hazmat suit” PPE for all staff, to treat patients testing positive.

The UK briefly flirted with this idea last year, with new “Nightingale Hospitals”, such as at the EXCEL exhibition centre near London City Airport. But then they threw it away – along with the lives of unsuspecting Brits.