Jaques Barzun and the Tragedy of ‘Race Thinking’ 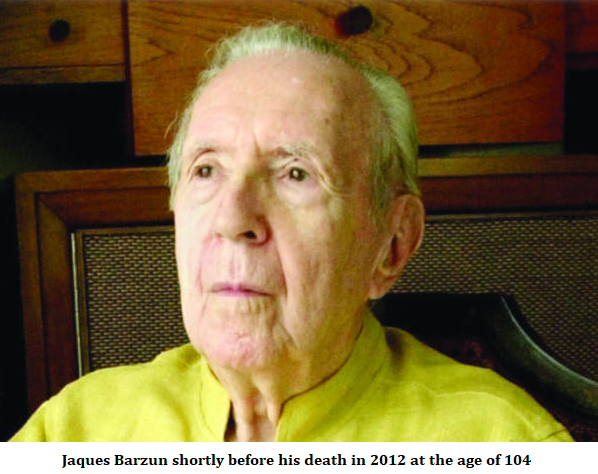 “This anxious wrangling which goes on about books and plays seems at times trivial but it is in fact fundamental. If democratic culture yields on this point no prospect lies ahead but that of increased animosity among pressure groups…”

The 1965 quote above is from Jacques Barzun (1907-2012), who made a very important contribution to the debate about racism and affirmative action. He issued a warning that went unheeded, and the explosive emergence of Black Lives Matter underlines the value of his advice.

Barzun grew up in a French household, where his parents conducted a modernist salon, and he completed high school in the US. He entered Columbia College in 1923, graduating four years later at the top of his class, then he taught at Columbia University and became a full professor in 1945, Dean of the Graduate Faculties in 1955, and the inaugural Dean of Faculties and Provost of the University in 1958. In his long career as a teacher, scholar and administrator he wrote, edited or translated some 40 books.

His first serious research was a dissertation on class and race in pre-revolutionary France, published some years later as Race, A Study in Modern Superstition (1937).  This was not written as a tract for the times because it grew out of research on cultural history that started long before Hitler became a significant figure. Barzun claimed the protracted dispute in France over the “race” of the nobility versus the bourgeoisie became one of the divisive factors that contributed to the French Revolution. Moreover “race-thinking” persisted after the Revolution as a component of the struggles between nations, political parties, religious faiths and social groups. For Barzun, “race-thinking” is one of the ways to justify collective hostility and it is most dangerous and powerful when it  operates in partnership with other motives such as the nationalism of the Nazis, the  socialism of the communists and, nowadays, the radicalism of Black Lives Matter.

Marxist doctrine at its purest is in form and effect racist thought. The class struggle is but the old race antagonism of French nobles and commoners write large and made ruthless. Marx’s bourgeois is not a human being with individual traits but a social abstraction, a creature devoid of virtue or free will and without the right to live.

The book was reprinted in 1965 and the Preface “Racism Today” makes interesting reading half a century later.

As long as people permit themselves to think of human groups without the vivid sense that groups consist of individuals and that individuals display the full range of human differences, the tendency which twenty-eight  years ago I named ‘race-thinking’ will persist.

This means individuals should be treated according to their personal characteristics, such as their fitness and qualifications for particular tasks, for as long as the qualities required are not race-related there is no need to make race an issue.

If it is made an issue then “race-thinking” will continue to generate muddled thinking and inappropriate actions with potentially dangerous unintended consequences. He insisted that giving up race-thinking calls for  equal opportunity but not affirmative action.  Because there are no positive or negative traits that are race-related it follows that “sentimental or indignant reversals of the racist proposition are false and dangerous. The victims of oppression do not turn into angels by being emancipated … Race-thinking is bad thinking and that is all.”

On affirmative action he wrote

When injustice is redressed, the hitherto outcast and maligned group must not benefit in reverse from the racism they justly complained of. They do not suddenly possess, as a group, the virtues they were previously denied, and it is no sign of wisdom in the former oppressors to affect a contrite preference for those they once abused.

Barzun recalled a report from a Fullbright scholar in Paris who witnessed a memorable celebration in the Latin Quarter. A contingent of white writers and artists led by black writers and accompanied by French and American students ceremonially burned the white race in effigy! He regarded that as an emblem of suicide by both parties because inverting the racial hierarchy leaves race-thinking intact and probably even stronger than before because it is sanctified by the self-righteous sense of correcting a great injustice. This is the mindset that turbocharges the BLM movement and the uncomprehending dupes in the general population who support it, like sporting teams that “take the knee.” 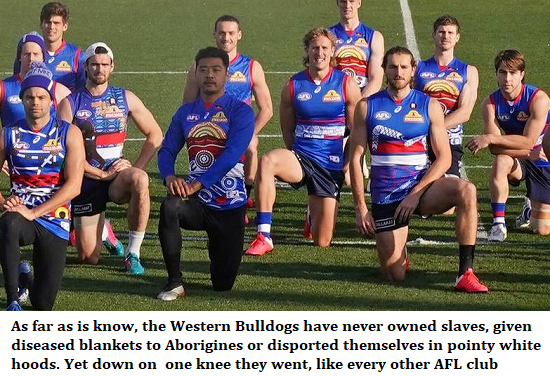 He addressed the situation when a representative of a group is depicted in a work of art or literature in a way that some people find offensive. He instanced the repeated attempts to have The Merchant of Venice banned and Huckleberry Finn removed from library shelves.

This anxious wrangling which goes on about books and plays seems at times trivial but it is in fact fundamental. If democratic culture yields on this point no prospect lies ahead but that of increased animosity among pressure groups … In social and cultural relations the law rarely intervenes effectively; the protection of rights and feelings only comes from decency and self-restraint.

The secularisation of Christian moral fervour

In a wide-raging commentary on American civilization in God’s Country and Mine (1954) Barzun commented on the mounting impatience of social reformers.

We may ask when and where the world has seen a whole nation developing the habit, the tendency, of continually looking out for those who in one way or another are left out…Yet look at the subjects of unceasing agitation in our daily press: the rights of labour in bargaining, the fight for fair employment practices, for socialized medicine, against discrimination in Army and Navy, in colleges and hospitals, in restaurants and places of public entertainment; in a word, the abolition of irrational privilege.

Under the influence of cultural Marxism and Alinski’s Rules For Radicals the demands for reforms, often reasonable at first, morphed into very different forms, from the Black Panthers to BLM. Paul Craig Roberts attributed this progression to what he called a “land mine” at the very basis of Western thought.

The 18th century Enlightenment had two results that combined to produce a destructive formula.  On the one hand, Christian moral fervour was secularised, which produced demands for the moral perfectibility of society.  On the other hand, modern science called into question the reality of moral motives.

These tendencies might appear to be contradictory but they do not balance each other.  The first drives demands for the immediate and comprehensive rectification of all the forms of injustice and inequality that are attributed to our traditional mores and the institutions of democratic capitalism. The other undermines any defence that might be offered for those mores and institutions. The result is an explosive mixture of moral indignation and moral relativism or scepticism. Barzun continue, “We should not be misled by the clamour and the wailing. It is our success that  has caused it.” An example of such success was the marked narrowing of the differential between white and Afro-American wages through the 1940s and the 1950s, before legislation for affirmative action. But a degree of success was not enough for the coercive utopians, who discovered the power of identifying social crises even if the situation was improving, such as teenage pregnancy, poverty and the murder rate in the 1950s, as has been described by Thomas Sowell using US statistics.

Sowell’s international study of affirmative action described the gap between the rhetoric and the reality of preference policies. Generally the demand for preferential policies came from well educated, ‘new class’ members of supposedly disadvantaged groups. The same people also become the main beneficiaries of preference policies that tended to further disadvantage the majority of their bretheren. In Malaysia the gap between rich and poor Malays widened in the wake of preference policies for ethnic Malays, with a leader of the affirmative action movement admitted the fact while claiming ethnic Malays preferred to be exploited “by their own kind.”

In The House of Intellect (1959) Barzun explored the influences that distract many intelligent and educated people from clear, direct and analytical thinking.  Among other more academic issues he took an interesting turn to examine the mostly informal “house rules” that operate in intellectual life, including the rituals of conversation in all its various modes from the encounter at the lift or the bus stop to the dinner table, the cocktail party and the academic conference. He cited Tocqueville’s remarks on the lack of freedom in American democracy that he attributed to the pervasive pressure for conformity which the Frenchman encountered when he toured in the 19th century. This pressure undermines the capacity for civil disagreement on controversial matters and Barzun deplored the awkwardness that he saw in social contexts when there was a threat of “highbrow” talk or mention of “hot” topics.

One of the consequences is the family tradition of “no religion or politics at the dining table”. He wrote about these pressures long before formal house rules on conversation appeared on campus with laws and codes related to “hate speech”, trigger warnings and the demand for safe spaces where only approved ideas may be expressed. Barzun advocated practices and procedures to free the flow of conversation and facilitate the nuanced consideration of divisive issues, noting any rules dictating what can and cannot be discussed will always be designed to restrict free speech, avoid controversial issues and kill the capacity of students to think critically and imaginatively about them.

Despite Barzun’s prodigious output and the high regard that he enjoyed in some circles it is apparent that his good sense and his helpful suggestions did not influence enough people to stem the rising tide of radical discontent, focussed especially on the issue of race. We can still learn from  him, if it is not too late!

Wan Secularism Is No Match For Islam

Russia’s Gaze Returns to the Baltic