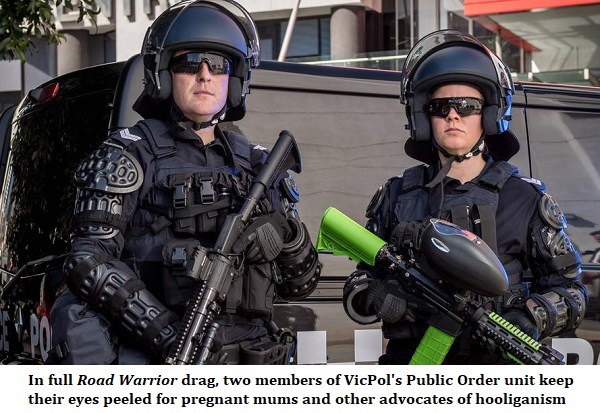 According to its Blue Paper, Victoria Police’s strategies include: “A focus on continuous improvement, evaluation and evidence- and experience-based best practice sharing.”

This is not mere managerialist jargon. Look how the sleuthing capacities of Victoria Police have recently improved: after first insisting there were no African street gangs in Melbourne, Victorian police were later able to find them and agree that they were a problem. Continuous improvement in ferreting out crime is ongoing: Victoria Police have also been able to scrutinise the Facebook posts of Zoe Buhler, a private citizen in Ballarat, and detect in them evidence of her inciting a protest against one of the Andrews government’s COVID-19 lockdown directions.

This improvement in the detection of crime by Victoria Police compares favourably with the success of the Stasi in detecting thought crimes by citizens of East Germany. For it is very like a thought crime for which Ms Buhler was arrested and charged: incitement is an indictable offence and is committed upon completion of the inciting conduct, even if the incitement fails to persuade anyone to commit any offence. It can attract a maximum penalty of 15 years’ imprisonment.

Incitement is the perfect crime for politicians keen to crush dissent, and the perfect tool for their compliant police.
Assistant Commissioner Luke Cornelius has defended the officers who arrested and charged Zoe Buhler. He added police, like the virus, don’t discriminate.

However, there still needs to be quite a bit more continuous improvement in Victoria Police’s understanding of non-discriminatory policing.

In late August 2020, high profile Melbourne AFL celebrity Sam Newman used a social media post to call for a quarter of a million Melbourne residents to protest against the Stage Four lockdown. The police response? No handcuffs, no arrest – just a visit by VicPol officers and a reminder of the guidelines surrounding lockdown protests. Newman claimed his words were “hyperbole” and cancelled his call to protest. He added on Facebook that the “very pleasant” officers “left a sheet with the official guidelines”.

In her social media post a day or so after Newman’s tweet, Zoe Buhler called for a peaceful protest in Ballarat against the same stage four lockdowns that attracted Newman’s interest. She too received a visit from Victoria Police. She didn’t admit to hyperbole but told them she didn’t realise she was doing anything wrong and offered to delete the post. No courteous reminder of official lockdown guidelines for a nonentity like Buhler or acceptance of her offer to delete her offending post. Out came the handcuffs and her arrest — when heavily pregnant and in in front of her children no less — for incitement.

Buhler’s fate is now in the hands of the Victorian judiciary. She will face the Ballarat court on 25 January.

Only three of the organisers of the BLM protest that attracted thousands of marchers through Melbourne’s CBD last June were fined. No one, no inciter and no marcher, was arrested or prosecuted. The anti-lockdown demonstration by a few hundred protesters at Victoria Market the following September attracted a massive police presence that included the armoured black shirts of the Public Order Response Team. Some 74 arrests were made and 176 fines issued.

The virus may not discriminate. It’s quite a stretch to claim that Victoria Police don’t.

From 1981 to 1992, Douglas Drummond was Queensland’s Special Prosecutor following the Fitzgerald Inquiry, and subsequently a judge on the Federal Court of Australia, from which he retired in 2003

For Safety, Ladies, Marry a Christian