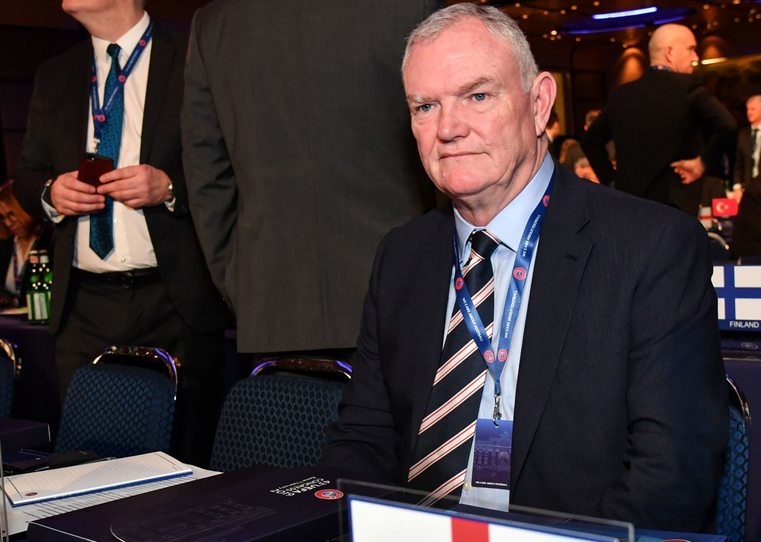 Greg Clarke (above), 63, resigned earlier this month as chairman of the English Football Association. More aptly, using the parlance of the game, he was red-carded. A successful businessman, sans university education, he was appointed in 2016, having previously been chairman and director of Leicester City football club and chairman of the Football League. Well ensconced you would think in the upper echelons of the English football world. Unfortunately, he didn’t watch his Ps & Qs; and, in this censorious age, that is terminal.

According to a report in the Telegraph (UK), Clarke made a series of “disastrous comments” before a select committee of parliament, the Digital, Culture, Media and Sport committee. Upright, politically-correct, folks all, I’m sure. The meeting was held via ZOOM, befitting a society bunkered down for fear of sickness and death, which I am reliably informed is new to the United Kingdom. “Ahh! The hell you say. We’re all gonna die one day?”

Clarke stepped in it, so to speak, not once, not twice, but four times. First, I will go to his manful attempt to say the right thing on gays.

“What I would want to do is to know that anybody who runs out onto the pitch and says on Monday, ‘I’m gay and I’m proud of it and I’m happy and it’s a life choice’ – they would have the support of their mates in the changing room.” Ouch! What next, gay bashing!

I hope you are not so unwoke as to miss the homophobia. Certainly, the great and good spotted it. On a similar occasion, even the dim-witted Democrat senator from Hawaii, Mazie Hirono, was alert enough to exhibit high dudgeon when Amy Coney Barrett used the deeply-offensive term ‘sexual preference’; instead, I assume, of sexual orientation. It ain’t a choice or a preference, don’t you know, but an innate proclivity. I have to strike my preference for women out of my lexicon.

Second, he tried (pathetically as it turned out) to say the right thing about racial abuse on social media.

“If I would look at what happens to high-profile female footballers, high profile coloured footballers and the abuse they take on socially media…” Please stop! Racism rearing its ugly head. Clarke apologised for using the expression “coloured footballers” and explained that he sometimes “trips on his words” having been used to saying ‘people of colour’ when he worked in the US.

But is his apology good enough? As it happens, the answer was no. There is all the difference in the world between saying coloured people and people of colour. And if you don’t understand that you are a racist too.

Third, he aired some thoughts about the shortage of supply of good-quality goalkeepers in the women’s game. He ought to have known trouble awaited from the sisterhood.

“I talked to a coach… And she said, young girls when they take up the game, [ages] 6-7-8, just don’t like having balls kicked at them hard.” Whoa! Sexism rearing its ugly head. Jane Purdon, chief executive of Women in Football, tweeted cuttingly in response that she had a high tolerance of footballs being kicked hard at her.

Bully for her. And, clearly, feminists in all occupations, including those not involving balls being kicked at them, have reason to be offended. The very idea that any young girl would be shy of having balls kicked at her hard is beyond comprehension.

To complete his public shame, Clarke once again got himself entangled in that fraught area of racial differences, of which the woke know there are none. South Asians, which I presume refers mostly to Indians and Pakistanis in the UK, apparently don’t take too much to football. Personally, I can’t recall seeing one on the pitch in the Premier League. Now Clarke might have said they prefer cricket and got away with it, maybe, perhaps. Alas, he didn’t.

“If you look at top-level football, the Afro-Caribbean communities are over represented versus the South Asian community … If you go to the IT department at the FA, there’s a lot more South Asians than there are Afro-Carribbeans; they have different career interests. So, what we have to do is treat each individual on their merits, but make sure we are inclusive…” Oh dear! Please stop talking, it’s your only safe strategy. How in the world did he survive for so long?

“Lazy racist stereotypes about South Asians and their supposed career preferences,” shot back Sanjay Bhandari, executive chair at Kick It Out. Incidentally he also found it “staggering” for anyone to say that girls don’t like balls hit hard at them. “It is completely unacceptable,” he added. Sanjay didn’t say whether he had young granddaughters and kicked balls hard at them. We are left to speculate.

What to say? Obviously, in the eyes of the avalanche of critics, Clarke revealed himself to be homophobic, racist, sexist and racist all over again. And he did all of this in relatively few words in one job-ending ZOOM meeting.

Anti-discrimination campaigners were reported as being “outraged.” Alex Davies-Jones MP (Labour) found Clarke’s language “absolutely abhorrent.” Alison McGovern MP (Labour) said she had her “head in my hands.” The FootballvHomophobia campaign described Clarke’s comments as “deeply offensive.” Piara Power, executive director of European football’s anti-discrimination organisation, Fare[i], said “this stuff about coloured players and Asians in the IT department [is] inaccurate and disgusting.”

There it is then. I can’t possibly defend Clarke. Obviously, he transgressed politically correct language and wokeness. The lesson: be careful what you say and how you say it. They are listening; they are unforgiving; and they are waiting to pounce.

[i] Fare, formerly: Football Against Racism in Europe