Leaving the Bunker in Year Zero 2020 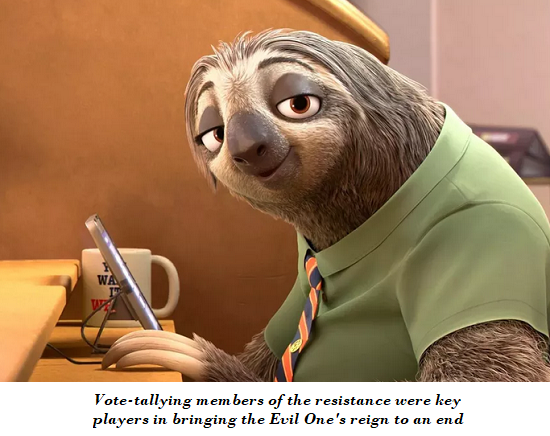 The nightmare is over. Today, for the first time in four long years, my family will see the horizon. We looked to the square sky each day as we trod the courtyard above our bunker, but we haven’t seen a tree or a mountain since the terrible year, 2016. The air, this day of days, feels different. It smells different. Are we the only survivors? Are there others like us who have survived the Orange Armageddon? Is the nightmare really over?

We knew people were alive. We saw the planes above the courtyard and we heard the sound of transport in the distance. It was as if nothing bad had happened. It was, mirabile dictu, as if our rhetoric didn’t match reality. We knew, though, that the Evil One, President 666, had marshalled an army of his Deplorables who would use every opportunity to destroy people with our values: people, like us, who were the last bulwark of civilisation against the coming dread.

That’s why we built the bunker. It wasn’t enough, as the sainted Michelle said, to go high when they go low. You can’t argue with the stupid. They’re gullible, will listen to any old nonsense. As Derrida so presciently said: “Surviving – that is the other name of a mourning whose possibility is never to be awaited.”

Did Russia rule America? How many people died in the nuclear holocaust the Evil One must have unleashed in the Middle East? Were women living the Handmaid’s Tale? How many of my African-American brothers and sisters, Latinos, LBGTQIA++ people (I apologise for my white privilege) have languished in concentration camps? How many remain alive to celebrate this day. Or had the Evil One and his jack-booted free-speech advocates managed what Hitler and the slave trade failed to accomplish: the extermination — I write with tears in my eyes — of everyone they hate?

We knew the days ahead would be hard. But we heard rumours of a saviour who had come among us. The Resistance — at least what was left of it: the FBI, the Democratic Party, the United Nations, China, Hollywood, the Department of Justice, the universities, the CIA, the media, Iran, the European Union, Big Tech, Big Social and Bruce Springsteen — had managed to send us messages from the underground.

Our former maid, a whip-smart graduate of Evergreen College’s Women’s Studies programme, brought us provisions and word from the outside. We implored her to stop dyeing her hair and to remove her nose rings, but she wouldn’t let the fascists win. Her courage was an inspiration. Her bravery matched her intelligence. She’d written an essay in which she proved, using feminist epistemology, that women working at Starbucks were under more pressure, and hence were braver, than soldiers in the 82nd Airborne Division on D-Day. It was phenomenal stuff and so, so true, if you think about it in the right way. In the end, we persuaded her to wear Western clothes instead of her usual boutique Punjabi look. Try and look like one of those boring, normal girls who don’t wear the uniform of resistance, we told her. Don’t be so much of an individual.

The saviour, our maid told us, was known by mysterious initials, KFC, AOC, ELO, ATM, JB-KH — she wasn’t quite sure what they stood for. The saviour, writing in the New York Times, explained the mystery of why more people had jobs while the Evil One was in power, and why this was a bad thing. She explained why peace in the Middle East was worse than war, and how a bad haircut and small hands were a harbinger of a demographic mass cleansing. She explained the paradigm of Venezuela’s collapse as due to capitalism and white privilege. “If you make more of something then there is less of it to go around. That’s why we need more of less”. Deep stuff, that’s why they’re known by their initials

We were heartened when we heard that something of value — millions of people with ‘studies’ degrees — had survived the apocalypse. And we consoled ourselves that our education system had gifted us with such accomplished young people, an educated elite who could see through the rampant materialism and spiritual impoverishment of the modern world. What did Cheerdrek Delphi say? “What use is technology and medicine if you can’t feel the totem pole?”

Thesee questions, and many others, roiled my mind during the four long years of exile. Had Vanuatu and Antarctica sunk beneath the waves without the necessary action on climate change, which the Evil One laughably said would cause hardship for poor people? Do people not understand that rending your garments makes everything better? Did the Evil One not understand consensus, where the carefully chosen agree with one another? It was obvious the Evil One was in the pay of Big Fossil to deny the obvious. “First they make a dessert and then they take a piece”, said Tacitus, presaging the awful reign of evil we’d just endured. I once heard a Deplorable stressing, in a Brooklyn accent, the second syllable in ‘Tacitus’ rather that the correct Latin pronunciation. I could barely contain my eye roll.

Would the world outside our bunker be a wind-swept, deserted plain, a desolate steppe devoid of human and animal life? Had the Himalayan blue-crested tit survived? Were people allowed to tell the correct jokes? Had anyone survived with the proper opinions? The fact that such terrible scenarios entered my mind proved that adherence to fact-based politics was essential for the future of humanity. Were good people still conditioned not to smile but, rather, make puckered, anguished sphincters of their mouths when the wrong joke or quip was uttered? We would find out when we ventured to the forbidding dawn of a new epoch.

These questions raced through my tortured mind when I encouraged my family to face the future. No matter what the Evil One had done, it was over, I told them. the nightmare brought to an end. Our task now must be to build a new civilisation from the ashes of the old. We’ll bring intelligence, goodness and truth back to the world, even if people don’t like it. We will be classy and cool. And we’ll celebrate diversity and inclusion. No old, racially corrupt, white, vulgar, rich or deplorable working-class men or women need apply.

We had one last moment in the bunker. I looked at my wife and daughters and wondered were they the last of womankind? Or would my daughters be the womb from which a new, better world would emerge?

“Courage,” I said, as they raised their expectant faces. “Courage,” I repeated as a whisper, “remember, you can’t buy dignity or class.”

“Gorgonzola, straighten your nose ring. Tenochtitlán, I don’t want to oppress you. What is your correct pronoun at this moment? Precious Diversify II, you start the chant”.

“Okay, put on your pussy hats. The Evil One has been removed by any and all means necessary. Now everything will be better.”

We walked towards the dawn of a new world.