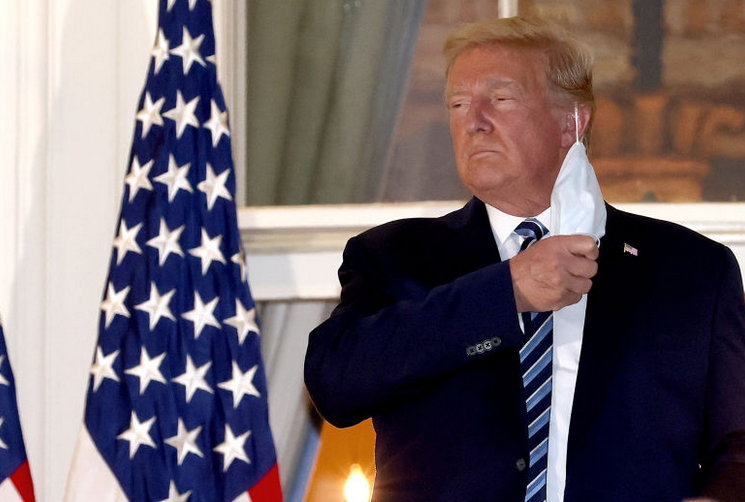 Perhaps when President Trump said that he “had to confront [the coronavirus] so the American people stopped being afraid of it so we could deal with it responsibly” he understood that his personal battle would create an entirely new narrative about the virus. Defeating it would be a powerful symbol that there is little to fear. Succumbing would dramatically prove the opposite.

Now that Trump, by his own reckoning, has got the better of the virus in just three days, and in doing so has done more to break the psychological stranglehold the virus has on citizens in the US and around the world than any social-distancing measure, vaccine, or mask-wearing ever could. He has embodied the journey that the US and the rest of the world must go through to relinquish their fear of the virus.

As Trump texted from the Walter Reed Medical Centre to former New York City mayor Rudy Giuliani, “If I had handled it any other way, I would have created more panic, more fear in the American people.”

Yes, the virus can be lethal. But we have known for months that is the elderly and those of otherwise ill-health who are disproportionately affected, as is the case with most health maladies. In Australia, no one under 30 has died from the virus. Just six Australians are in an intensive care unit as a result of it. And the population-wide infection rate is one-in-a-thousand and the population-wide fatality rate is one-in-three million.

As Trump said in a statement released following his return to the White House, “Don’t let it dominate you, don’t be afraid of it. You’re going to beat it.”

Just as pro-lockdown news organisations have paraded the rare cases of those under 40 succumbing to the virus, so now will the personal experience of one man represent the counterview in the debate over the coronavirus.

Contrast Trump’s handling of the virus with that of another larger-than-life figure, Boris Johnson, who contracted the virus in late March and required treatment in an intensive care unit. We don’t know the exact details of his condition and treatment, but we do know Boris missed his moment. Rather than lifting up the nation, he chose to poke fun at his weight, saying “I’m only about 5 foot 10, at the [most], and, you know, I was too fat.”

His personal experience of COVID-19 has been used to further empower the Nanny Staters of the public health bureaucracy with a licence to impose more regulations on an even greater variety of human activities, such as through the expansion of the NHS “weight management services”, a ban on junk food advertising before 9pm, plus the requirement that calorie counts to be added to restaurant menus.

Meanwhile, his government’s handling of the virus has failed, and failed miserably. Rather than sticking to his original instinct and following a Swedish-style approach of issuing advice and trusting citizens to act in their own best interests, Johnson capitulated to the health bureaucracy and ordered lockdowns based on highly erroneous modelling. Now, six months on, the only thing the lockdowns did was destroy Britain’s economy and society. The virus is still on the loose, and Britain is now in a second lockdown, more brutal than the first.

Other than the Brits, Australians are perhaps more irrationally fear-stricken than the citizens of any other nation. A survey prepared by CT Group in September found a staggering two-thirds of Australians believe they are going through a “second wave” of infections — the highest out of all of the surveyed countries which include the US, UK, India, Hong Kong, and the UAE.

This view is held despite the fact that only 28 per cent of Australians live in Victoria, the only state to be living through a resurgence of the virus. And even in Victoria, it is only pockets of metropolitan Melbourne that have recorded diagnosis spikes over the last two months. Such fear defies logic even as it ignores the fact Australia has some of the lowest coronavirus numbers in the developed world. (Perhaps this is evidence of the well known phenomenon that the less frequent an event becomes, the more people claim to be witnessing or living through it.) Or perhaps it is the incessant wall-to-wall media coverage which has a breathlessly reported all the bad-news developments while seldom bothering to provid context. The media has certainly not given much attention to how benign the virus has been for so many.

Trump has shown the only way to pierce the official narrative is to live life to its fullest and confront, rather than cower from the virus. And it is Trump’s apparent defeat of the virus which may now have placed him beyond defeat in November.

Trump vs. the Accepted Wisdom