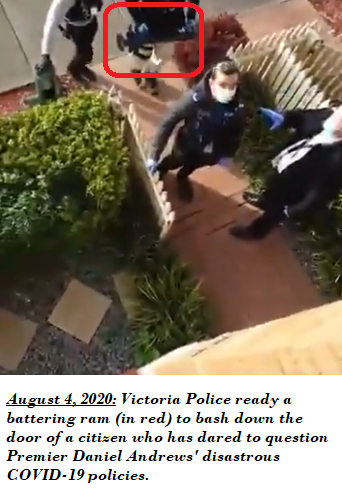 I wrote in April as the Wuhan hysteria was being embraced by our governing class that:

Until now we have only experienced political correctness in its authoritarian rather than totalitarian form. I have a strong intuition that is about to change very quickly. I am almost wholly convinced that we will not have the capacity or the will to resist the Left when it chooses to deliver the coup de main to what remains of our liberties and our institutions.

Well, we are about to know whether I was right. Every Australian knew this morning what went down in Ballarat on Tuesday night. After all, it was livestreamed right up until the mobile phone transmitting it was taken from the man with the child in his arms.

I taught myself how to livestream this morning. I now see that if I had been that man in Ballarat I would have been left with no corroborative record of what happened when those masked men and women entered my home. I am also resolved to quickly learn other skills and to re-acquaint myself with the efficient handling of other instruments of defence. I counsel you to do the same. I say this soberly. Hyperbole is out of place.  In any event, for anyone who watched what happened to the Ballarat mother on Tuesday night, hyperbole is redundant.

As in Victoria yesterday, so it may be in any other state tomorrow. The cultural virus of leftism is the problem.  It entered our Commonwealth at least 50 years ago and has never encountered any organised institutional resistance; the possibility of maintaining a herd immunity from such a malady was long ago extinguished by our schools and theatres and parliaments and by our media, and our public broadcaster in particular. Victoria has had more “COVID cases” than other state to be sure, but to describe a virus with the incidence and transmissibility and relatively low lethality of this one as a “pandemic” is a to carry out the same perverse deconstruction of meaning and clarity in the medical lexicon, as the Left have done for decades to our legal, aesthetic and moral vocabularies.

With improbable irony, The Centre for Disease Control in America issued its GSCC (great statistical COVID correction) on the very day the Victorian Legislative Council extended the state’s “emergency” response by six months. Do you hear of it on ABC News or read of it in the establishment press? No, of course not, yet the CDC has made an authoritative pronouncement that the numbers of COVID deaths  have been grossly exaggerated in the United States by public authorities, including the CDC itself. Australian governments and those in thrall to them have been guilty of the same deliberate, unscientific, and misleading statements about the magnitude of the risk presented by the virus .

To die with Covid is not the same as to die of Covid. We have known this from the start.

Of the 190,000 deaths in the US attributed to the virus, 94 per cent have involved an average of 2.6 “co-morbidities” i.e. there have been two or three other explanations for such deaths. That is hardly surprising, given that the CDC correction also notes that the average age of such decedents is 80 years (the average age at death generally in the US is 78.9 years). The position is essentially the same here and throughout the rest of the world. The statistics only confirm our personal experiences and the inferences we have drawn from them over the last six months.

I say “we” but that is careless. Many people are unwilling to allow either their own experience or the truth about the virus to inform their judgements about the virus and the calamitous response to it by our governments.

Let me get personal and tell you of an email exchange I had about the Ballarat lady’s arrest on Wednesday. It was with someone relatively close to me, younger than me and known to me heretofore as a kindly disposed if reflexively liberal individual. I sent her the video clip of the arrest, curious of her reaction. This is how she responded to me :

Saw it already. I do feel sorry for her. She’s in over her head. Was organising an anti-lockdown protest on the weekend. It is currently illegal, as was a recent black lives matter protest. In my opinion, being arrested, though distressing, wasn’t violent.

I believe being part of a rally with possibly 100’ or maybe several thousand people, presumably without masks, in a state overwhelmed with Covid cases, is a far more dire situation for her unborn child.

I was surprised by her response to the point of disquiet; distress might  be a better word for my reaction. I know her to be a mother of children. She reads literature of the old canon regularly. She has a sense of humour. She is, as I have already said, a kind person, generous to her friends and family.  How can she be so unconcerned, so dogmatic and so wrong in her response to what happened to this woman?

1/ how she patronises the victim of this outrage: she is “over her head” she says, implying surely she should not be permitted to express a view about a matter of vital public concern, let alone attend a demonstration; that is the preserve of other folk, I suppose, the bien pensant like her, ABC-watching and listening, metropolitan and secure in their sense of cultural ascendance;

2/ how illegality itself is her criterion for judging the woman; this from someone who is part of a generation indulgent of lawlessness, if not anomie.;

3/ how carelessly and casually scientifically illiterate she is. Mandatory masking is medically indefensible and infant mortality from this virus in next to completely unknown. No matter. Everyone in authority and on the television and with whom she interacts says these things and so incuriosity and conformity meet again in the arena of the politically correct;

4/ how callous her attitude to a pregnant mother is, and to a person whom the video shows is manifestly not belligerent or rude and who is married or who lives with someone who appears on the evidence of the video to be of the same disposition. Remember my correspondent is a mother herself. Surely it does not require negative capability of the kind possessed by Keats for her to imagine herself being in the same position as the mother in the video while pregnant with one of her own children;

5/ how she pointlessly references Black Lives Matter,unless of course the purpose of such reference was to remind me that protest can only ever be licit if it is leftist. The subtext is, perhaps, that if BLM cannot protest then for someone like this rural peon to think that she should be allowed to do so is simply impertinent.

How many folk like this correspondent of mine do you know? How many such persons are you obliged to be friendly with through work or family circumstance, or have to deal with or are suffered to endure on the airwaves or on the bus or sitting next to you at the coffee shop?  How did such people come to be the only kind who get to speak at all of our public ceremonies, sit in our parliaments, write all of our dramas, set all of our standards, assemble all of our intangible social infrastructure and teach all our children?  How did it come about that they set the very tone of our cultural exchanges and select the very shades through which we are allowed to look upon on our past?

…conscience does make cowards of us all,
And thus the native hue of resolution
Is sicklied o’er with the pale cast of thought
— Hamlet, Act 3 Scene 1

There must be a lot of them because together they can elect Marxists like Daniel Andrews to govern the states in which they live and elect Liberals like Scott Morrison to the prime ministership so that he can give the like of Andrews seats at the national cabinet.

Scott Morrison has told us, remember, (they are his own words) that he has “zero interest” in participating in the war of defence against our cultural dismantlement which has left us with a political dispensation of the kind which saw a distressed and pregnant mother in Ballarat arrested and handcuffed in her own home in front of her children. Since then, as per the clip below, it has only grown worse.

Happened in Melbourne this morning… pic.twitter.com/NREFTx1j9d

That a person should be charged with an offence for merely signalling her support for a peaceful protest is serious enough but was made worse by the conduct of witless police officers unable to discern how grossly inappropriate was the decision to arrest this woman, given the offence she was believed by them to have committed  (“incitement” to breach these novel emergency regulations) and how grossly disproportionate their mode of arrest was in light of her co-operative conduct and the circumstances within her home.

My strong intuition is that the livestreamed event will be a significant event for many people. I can tell you sincerely that it was such for me. I believe that how we each react to what we saw will put us on either side of a luminous wide line. I expect to be on the less populous side of the line but I know I will be in good company.

In the meantime I am searching out the name of the group who organised the protest event the young mother wished to attend. I am told that they are organising a national event on Saturday. I will be there. While in attendance I will not wear a mask. Nor will I distance myself from my companions. I will not do either of those things because neither would do anything meaningful or even measurable to prevent the statistically infinitesimal chance of me spreading or catching a virus that is by, many orders of magnitude, less potent than the influenza virus.

Doing that and dealing with anything arising it from of it will be easy.

But civil disobedience of a kind that will carry more serious consequences will be required of us soon enough, I expect.

Stuart Lindsay is a retired Federal Circuit Court Judge. He is not a resident of Victoria, so Daniel Andrews’ personal police force will need to find another door to kick in

Bolt, the judge, and the gherkin!

Enough With the Candles and Tears

Singing in the West