The Future Flood of COVID Furphies 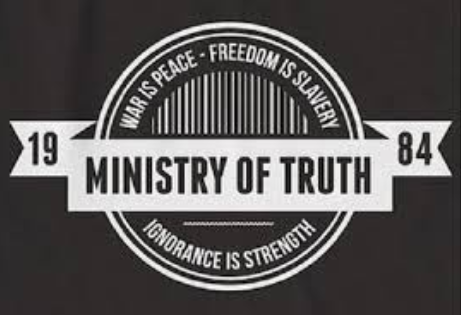 At the Anglican service I attend each Sunday, my church currently draws only about only one-third the number of people as compared with pre-COVID times. Precautions are taken. There is ample space and pews are marked to ensure social distancing, procedures are in place (e.g., no pew-by-pew collection, ‘peace be with you’ via hand signals) to minimise the possibility of transmission, most people wear masks, hand sanitizer is available, the names of those attending are recorded, no singing is allowed by government edict, and the pews are wiped down with disinfectant after each service. Yet still they don’t come.

Why is that? The answer is clear. Such alarm has been created by governments, their public health gurus, and by most of the media that many people have a quite distorted and grossly exaggerated view of the virulence of the virus. You can do what you like to engender particular calm but it is trumped by general alarm.

Notice, even conservative commentators add weight to the alarm. So far as I can tell, only Alan Jones stands apart, with an honourable mention going to Andrew Bolt. Quarantining, social distancing, testing and contact tracing are all promoted. It’s got to be serious. Hasn’t it? Sure, they only go a small part of the way with Despot Dan. But they travel in the same misdirection.

There is no evidence that the virus can be stopped. The time pattern of death from COVID-19, so far as the figures can be relied upon, follows a similar pattern regardless of the extent of lockdowns, quarantining, social distancing, mask wearing, etc. There is a sharp upsurge as the virus does its work on those susceptible – the aged with co-morbidities – and then the death rate tails away once the virus meets up those with the ability to fight it off. The discovery rate of new infections, largely as a result of increased testing, is an irrelevancy; and more so, if testing, as is now suggested, picks up the remnants of past infections among those who are well.

For illustrative purposes this is a graph of deaths per million in the UK and Sweden, but a similar pattern applies across all Northern hemisphere countries. 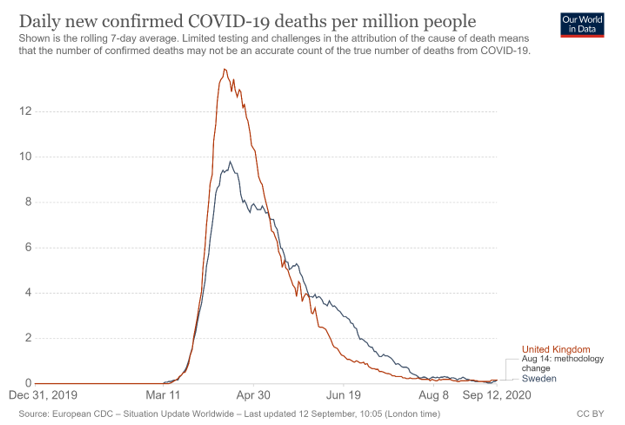 Essentially, deaths are the only thing that count and they are now trivial in number. But not if you want to keep everyone alarmed. Reporting very few deaths simply doesn’t do the job. To be clear. It is essential to keep people alarmed. The costs and destruction have been too great to ever concede that we haven’t been under, and still face, an almost existential threat.

Time will eventually produce a kind of perspective. When we look back on this year in some years’ time it might be hard to distinguish any noticeable lift in the overall rate of death. Perhaps a short-lived blip. At the same time, the political machines will have been out in force concocting and giving currency to the storyline that a health disaster, at least on the scale of the Spanish flu, was averted only by wise governments applying tough medicine. And, with the media onboard, it will be a bagatelle.

And what of the factual perspective: This disease was very selective. It killed the old and ill who, on average, had only a little time left. And it left those not in this category alive and kicking. Yet, governments delivered the worst of worlds. Those in aged care bore the brunt of deaths. Those who were healthy and under no risk from the virus bore the brunt of being thrown out of work or of having their businesses destroyed.

The factual perspective will have few fans. Even Donald Trump, a true hero, single-handedly holding back the onslaught on our civilisation, is heavily invested in the storyline. Just listen to him. He is still saying that over two million Americans would have died without the lockdown. Sweden rather ruins the script, but who really cares about a few million Swedes in a land far away of which we know little.

A Good Conservative Will Do That