What Leftoid Doesn’t Love a Lynching? 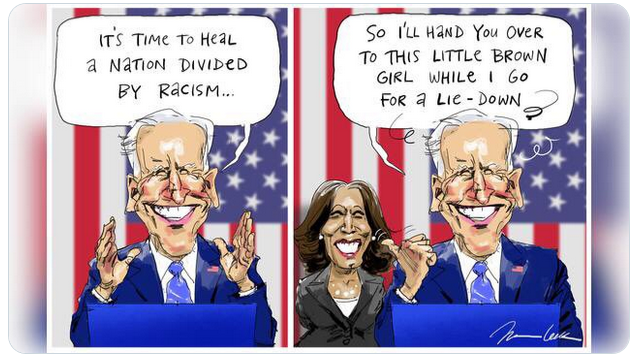 Sisters and brothers of the perpetually offended (aka The Crazies) were apparently out in force condemning Johannes Leak’s cartoon (above), which appeared in The Australian last Friday. I missed most of the outrage, not being on social media. Caught it second-hand and via a few letters to the editor. Apparently, among other things, it was unacceptable and distasteful. Cut to the chase, in their paranoid minds, it was racism writ large.

When I first saw it on the Friday morning, I gave it but a passing glance. It is good but fairly obvious and fairly tame. It is a take on Biden’s feebleness and patronising attitude towards people of colour, using some of his own words. Sleepy Joe, Trump calls him, and Biden has form. Recall his description of Obama back in 2007. “I mean, you got the first mainstream African-American who is articulate and bright and clean and a nice-looking guy. I mean, that’s a storybook, man.”

Consider closely what he said. The first (the first!) mainstream African-American man who is clean, who is bright, who is articulate. Man, he had to be kidding. Else how could the woke, perpetually offended, crowd possibly let him get away with it. Of course, the woke crowd is discerning. It’s not always what you say (though it is if the LGBTQ lobby doesn’t feel the love) but who says it that counts.

But let’s face it, who, among the sane, actually cares what the woke crowd say? Well, the editor-in-chief of The Australian clearly does. Chris Dore rushed into print in the weekend edition.

He provides a tweet of Biden’s, referring to little black and brown girls being inspired by his VP pick. He goes on to explain how to interpret the cartoon, presumably for those readers who are intellectually challenged. He ends thus: “The Australian deplores racism in all its guises, as does Johannes.” Well, blow me down with a feather, we wouldn’t have guessed.

This is pandering to children, to those whose development has been arrested on or before puberty. Ignore them. Reprint the cartoon, perhaps with absolutely no explanation. And, don’t print ridiculous letters. At least not three of them. All three had Victorian addresses. No accident, I think. No doubt they voted for Daniel Andrews or The Greens and will vote the same way next time. They’re half-wits.

Surely, I am not suggesting censorship? Yes, I am. Well, maybe not. Maybe shunning is a better descriptor. They cancel us; we, being civilised, simply shun their views.

Some years’ ago, I started feeling physically ill when exposed to tripe on the ABC or BBC or on leftie websites or newspapers. I became rather like Alex (Malcolm McDowell) in A Clockwork Orange. You might recall he experienced debilitating nausea on hearing Beethoven, after his aversion-therapy went wrong.

I don’t know whether something dreadful happened to me when I was once watching, say, Q&A. But it might explain my acute distress at the least exposure to any ABC ‘personality’, e.g., Tony Jones or his wife (the breathless) Sarah Ferguson, Louise Milligan, Virginia Trioli, Barrie Cassidy, Paul Barry, et al.

For a while now, I have handled things by simply ridding my life of all (or at least most) exposure to opinions at odds with the truth. To wit, to the empire of lies which constitutes left, green, woke views and commentaries. Admittedly, it’s hard to get away from all of it. Hence, I admit to reading those three aforementioned insufferable letters in The Australian.

I watch Fox News for information on America. But don’t imagine you can just switch it on. So-called news anchors like Chris Wallace (Dems in disguise) must be avoided. I watch Sky News for information on Australia but, here again, I focus on Andrew Bolt and Alan Jones and very occasionally Paul Murray, Chris Kenny and Rowan Dean. I am not sure who else is worth watching but I suspect lefties are lurking somewhere.

I subscribe to The Telegraph to get my UK news. But there is a problem, as there is with The Australian newspaper. They play on both sides of the street. But really there isn’t a lot of choice; that is, if you like reading newspapers rather than just relying on conservative online stuff. But avoid the editorials like the plague, so to speak.

The Telegraph badges its editorials as being what the paper thinks. But, of course, newspapers are inanimate creatures. They don’t think. Only people think.

Some time back The Australian expressed support for a carbon-trading scheme. Is that still the case or have those global warmists who held this destructive view now passed on? The Telegraph recently averred that Kamala Harris is a moderate. Patently ridiculous, which only an idiot or charlatan could possibly come up with. It is a Democrat talking point, having no relationship to the truth. Perforce, nothing of what Democrats say nowadays has much, if any, attachment to the truth. But wouldn’t it be nice if centre-right newspapers had intelligent people writing their editorials who still strived to tell the truth.

Fortunately, there are still numbers of commentators writing for both newspapers who are worth reading. They keep me buying. Though, as an aside, my loyalty to particular writers at The Australian has been stretched by COVID-19. Greg Sheridan has gone completely off the rails into faraway land. And Katrina Grace Kelly wrote the other day that “we know the state [Victoria] is doing its best under tough circumstances.” Really? You just got to wonder what below best would look like.

On the other side, Adam Creighton, who often annoyingly takes aim at the old and ‘privileged’, has been a marvellous conveyer of common sense and realism on the Wuhan virus. Gerard Henderson writes sensibly about everything, so far as I can tell, and he had a good piece about the virus at the weekend. Mind you, if you really want to read the definitive account on the virus, you have to go to Steve Waterson. He wrote a magnificent article on April 3 and followed this at the weekend with another must-read piece for conservatives. Must-read too, I feel, for Greg Sheridan and other pandemic-panicky pressmen (and women).

There it is. I hope that if we ignore them (the woke crazies on the left), they will eventually go away. But, in any event, don’t pander. It feeds their paranoia.

The Bitter Harvest Putin Has Sown