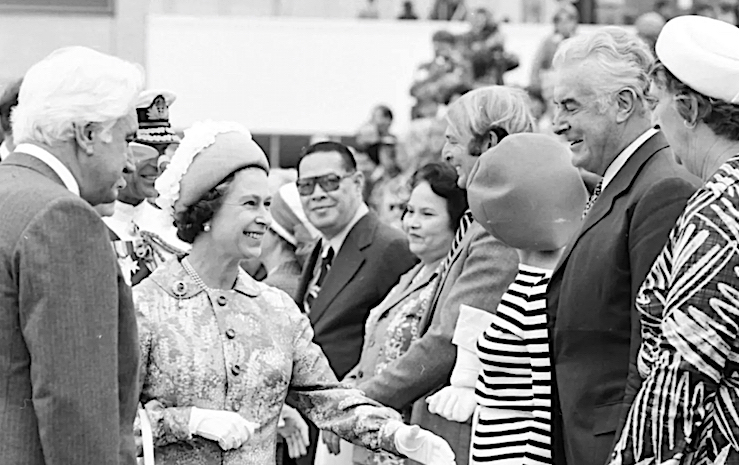 Today’s editorial in The Australian acknowledges that the Palace letters give the lie to Professor Jenny Hocking’s conspiracy theory.  Nonetheless,  in the same way that almost every commentary that gives some credit to President Trump for some achievement or other – of which there have been many – must include an obligatory swipe at his  boorishness, so the increasingly woke Australian cannot resist its own gratuitous king-hit on Sir John Kerr, our most maligned public figure after Captain Cook.  Here are some extracts:

Australia’s 18th governor-general, Sir John Kerr, was proud and vain, a dangerous schemer who put himself at the centre of the single most dramatic event in our political history.

Whether or not Sir John was proud and vain is, firstly, subjective and arguable and, secondly, totally irrelevant to the matter at hand.  But more importantly, he did not put himself at the centre of events.  He was placed there by Gough Whitlam and Malcolm Fraser. Once Fraser decided to block Supply, Kerr had a role to play whether he wanted it or not.

As Kelly notes after the release of the letters, the plot was hatched at Yarralumla, not in London.

Sir John Kerr resigned as Chief Justice of NSW to accept the role as Governor-General.  He may have been motivated by a degree of social climbing but, nonetheless, he did not believe he was accepting a purely ceremonial role.  He believed that the Crown, represented by himself, had a crucial role in the governance of this country and did not see himself as merely a cipher.  He was aware of the existence of the reserve powers – indeed it would have been odd had he not, considering that NSW Premier Jack Lang had been ‘cancelled’ (to get with the modern argot)  by NSW Governor Sir Phillip Game in 1932. If his planning and consideration of options in the event of a political crisis are to be described as a ‘plot’, you could apply that derogatory term to any manager in any field of occupation carrying out his normal function.  Kerr was doing what his job demanded – preparing to handle a foreseeable situation rather than letting himself be caught unawares.

Only Labor diehards could find intellectual vindication or solace in the odd flourishes from Kerr in the letters, his bonhomie and gossip, amid the foul air of obsequiousness.

I have read Kerr’s letters to the Palace and yes, indeed, they are voluminous.  Presumably, Kerr thought it his duty to keep the Queen informed of events within her realm.  Such matters covered ceremonial issues (on one occasion Kerr advised the Queen that he had dispensed with the curtsey with respect to himself and his wife – hardly the act of the pompous clown that many like to depict him) as well as matters of State.

On a few occasions he adverted to personal matters, such as the serious ill health of his wife.  On September 6, 1974, Sir John asked Sir Martin Charteris, the Queen’s private secretary, if had been providing ‘too much or too little detail’ in his letters.  Charteris replied, on September 14, that he thought the detail about right and said that the Queen took pleasure in Kerr’s correspondence.  As to ‘foul obsequiousness’, as far as I can see, this amounts to no more than Kerr ending his letters long the lines of ‘Would you please convey to Her Majesty my humble duty and respect’.

I notice that in yesterday’s SMH, Hocking is still claiming that the letters revealed a bombshell.  That is true only if you were so ill informed as to be unaware that Kerr had discussed the political situation with the Palace.  That has been a matter of public record since 1975.

And one final point, I take issue with the description of the 1975 events as a ‘constitutional crisis’.  It was a political crisis that was resolved by the provisions of our constitution acting effectively, as is evidenced by the results of the subsequent election.

The Victimhood of George Takei

Aid and Comfort for the Enemy