It Was Politics, not the Constitution 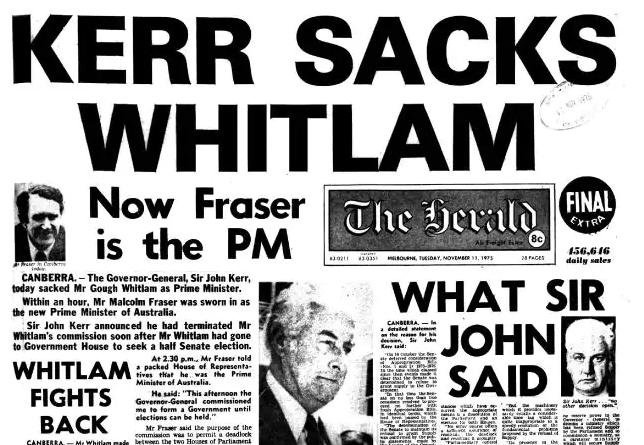 When events are politicised they often acquire names that do not properly reflect what really happened.  One example is the so-called Rum Rebellion, which was a coup d’état in 1808 to overthrow the governor of NSW, William Bligh.  In reality it arose from a power struggle between the governor and entrepreneurs such as John Macarthur and was initially referred to as the Great Rebellion.  However in 1855, a Quaker, William Howitt, published a popular history in which as a fierce opponent of the ‘demon drink’ he coined the name ‘Rum Rebellion’, which has stuck to the event ever since.

We can note a similar situation with the so-called ‘Constitutional Crisis’ of 1975, although in that case the misrepresentation occurred almost immediately.  The events in 1975 did not amount to a constitutional crisis.  The Constitution was clear and worked as it was designed to work.  When a government can’t get a supply bill passed by Parliament, this creates a political crisis, not a constitutional one.

In this regard, the democratically elected Australian Senate may be contrasted with the unelected British House of Lords, which under the Parliament Act 1911 lost the power to reject or amend any legislation in a way unacceptable to the House of Commons.  As far as supply is concerned, an opposition in control of the Senate cannot amend but may choose to pass, reject or defer consideration of the relevant bills.

In 1975 the Federal Government was in trouble.  Ministers were being sacked or sidelined and the final blow to its image was the Loans Affair, an attempt to borrow money, bypassing the Treasury, from Middle Eastern sources through the agency of a more than somewhat shady small-time Pakistani commodity dealer, Tirath Khemlani.  The Opposition, after much huffing and puffing about extraordinary circumstances, but having the required numbers in the Senate, announced that it was going to defer passing supply unless a general election was called.  Gough Whitlam, knowing that public opinion had turned against his government, chose to fight with every means at his disposal any and all calls to hold a general election.

At this point, we should consider the critical role of conventions in our Westminster system.  Of course, no convention can override the express provisions of the Constitution, but they have developed over the years to ensure its smooth and civilised operation and are generally not amenable to legislation, as this would constrict their capacity to meet situations no one anticipates.

Michael Connor: Inventing the Dismissal and
Stumbling on the Steps of History

Two conventions are relevant here.  First, if the parliament refuses Supply the government should resign or call a general election to resolve the matter and, second, the Governor-General acts in accordance with ministerial advice.

In his book, The Framers of the Australian Constitution: Their Intentions, Dr Frank McGrath, a former Chief Judge of the Compensation Court of NSW writes:

It is clear from an analysis of the Convention debates that the framers of the Constitution understood that the principles of responsible government needed modification to adapt them to a federal structure.  There is no doubt that they intended that Supply could be refused by the Senate, and that such a refusal could force the government either to resign or advise an election of the House of Representatives.

The debates also make it clear that the framers of the Constitution were aware of the potential dangers this posed.

Parliament includes both the Senate and the House of Representatives.  The Senate has the power to pass or reject (but not amend) an appropriation bill.  In accordance with convention, Whitlam should have sought a general election when the Senate refused to pass Supply.  None of this was new.  Oppositions from both sides had previously threatened to bring down both state and federal governments by blocking Supply but had generally lacked the numbers to bring this about.  This time the opposition actually had the numbers, but Whitlam refused to comply with convention.  The opposition stuck to its guns as money to pay public servants and government creditors was due to run out by the end of November.  The government developed a scheme to borrow money from the banks to get around this, but it was generally believed that this was probably illegal.

Finally, Whitlam informed the Governor-General that after the Remembrance Day ceremony on November 11, he would visit him at Government House to advise the calling of a half-Senate election for December 13.  However, such an election would not resolve the supply situation, as money would run out before the Senate was reconstituted and, in any case ,whether or not the new Senate would pass supply could not be known.

As noted, in accordance with constitutional convention, a Governor-General acts in accordance with ministerial advice, so the only way to resolve this conundrum was to change the advising minister.  Thus, when Whitlam saw Kerr on November 11, Kerr had no option but to dismiss him before he formally tendered his advice, which is what he did.  Fraser was then commissioned as caretaker prime minister on the basis that he would obtain Supply and advise a double-dissolution election, which he also did.

Thus it was Whitlam himself who in the final analysis determined the date and timing of his dismissal from office.

Of course, numerous red herrings have been scattered around to confuse matters — one of them was the allegation that Kerr’s action in obtaining advice from Chief Justice Sir Garfield Barwick was improper.   This is more nonsense. Since Federation, chief justices have repeatedly advised both governors-general and state governors on constitutional matters.

Another red herring was John Pilger’s fanciful assertion that the CIA and MI6 were involved in the dismissal.  This is not to say that many in the CIA weren’t pleased, but so were many others.  For example, in his memoirs, From Third World To First: The Singapore Story: 1965-2000, the Prime Minister of Singapore, Lee Kuan Yew, wrote of one dispute with Whitlam, “I was prepared to expose his motives and show him up as a sham white Afro-Asian … It was a relief when their governor-general removed Whitlam.”  Yet no one has ever claimed that Lee played any role in the dismissal.

The recently released letters between Buckingham Palace and Yarralumla fully reveal what anyone of any sense already knew – that the Queen had no role in Whitlam’s dismissal.  This should have been the end of the matter.  However, in an article in The Australian of July 20, 2020, constitutional lawyer Professor George Williams writes:

The release of the Palace Letters has shone light on a flaw in our system of government. This is the possibility that the governor-general can dismiss a prime minister who enjoys the support of the House of Representatives. Sir John Kerr said he exercised such a power to dismiss Gough Whitlam on November 11, 1975. However, it is not clear that such a power even exists.

Later in the article, he writes:

Kerr’s dismissal of the Whitlam government using a reserve power that may or may not exist remains an open wound in Australia’s democracy.

That a law professor would ignore the fact that our Parliament is more than just the House of Representatives is extraordinary and takes no account of the fact that, in giving specific powers to the Senate, the Constitution explicitly modifies the Westminster system of responsible government as applied in Australia.  Further, that a power may not exist in the face of a clear demonstration that it does shows a disconnection from reality.  That the dismissal should remain an open wound in Australia’s democracy when it resulted in Australians going to the polls (and giving Malcolm Fraser landslide control of both houses) defies logic.

The lack of judgement of so-called experts in academia, the media and the republican movement should concern us all, but comes as no surprise. In 2005, a book of recollections was published by Melbourne University Press entitled The Dismissal, Where were you on November 11, 1975?   Edited by Sybil Nolan with an introduction by Jenny Hocking, the book consists of essays by people from all sides of the debate.

In one essay, The Professors’ Lunch, author Frank Moorhouse recalls having lunch in the dining room of the university staff club on November 11, 1975, with Donald Horne and Professor Douglas McCallum, both on the staff of the Department of Political Science at UNSW.  During their meal a waitress came up and informed them, breathlessly and close to tears, that she had heard on ABC radio that the Governor-General had sacked Whitlam.  McCallum, who hated Whitlam, said that she must be wrong, that this was not constitutionally possible.  Horne said she must have misheard it.  Both proceeded to lecture her on how things worked.  Moorhouse recalled, “I laughed and said, ‘You have two professors of political science here’.  She seemed to cheer up, blushing with confusion.”

It’s not only French philosophers who mislead our youth!

None of this necessarily justifies the actions of the Senate in denying Supply.  Whether this was right, or if Fraser and his supporters were unprincipled opportunists, is open to debate.  But that’s a political question, not a constitutional one.