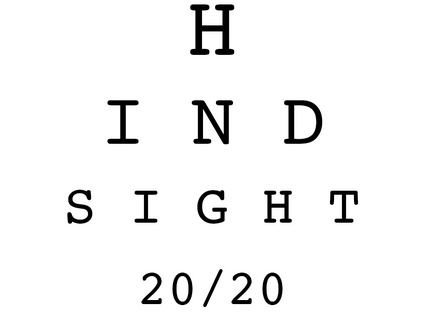 You must admit, hindsight has a pretty bad name. It’s often a stick wielded by some smarty-pants who didn’t have the foresight to make the same criticism at the time. And what makes the victim wince is that it always contains facts. Why the rest of us like it is that we have long been taught to “trust the science”. Hindsight epitomises pure and exact science.

But just for a moment, let’s turn that clever thinking on its head and ask how hindsight could enlighten decision-making before the event. For those of us in the role of watchers rather than actors, it is usually frightfully easy to perceive the correct course of action to be followed in any seriously difficult policy matter. We have skills the actors are denied. Where they are confused, we alone see the obvious. After all, we are the ones who will pronounce the hindsight verdict. Almost by definition, the actors are so uptight as a result of feeling the responsibility of making decisions, they are bound to get them wrong. The problem therefore is simplified to this: how to transfer our collective wisdom to the actors before they inevitably get things so wrong.

Geoffrey Luck: Well pay in pain when the bill comes due

You will not be surprised to learn that these thoughts were provoked by reflecting on Australia’s disastrous management of the COVID-19 challenge. No trumpeting of a national emergency cabinet, propaganda appeals that “We’re all in this together” or canonising nurses can obscure the fact that government has killed the economy to save us from an epidemic that never came. That’s the hindsight judgement we can now make.

Stampeded into precipitate drastic action by the fake science of computer modelling, posing a false choice between saving lives and maintaining normal business, a conspiracy of incompetent politicians and bureaucrats created a million unemployed with the stroke of a pen. And then wasted billions in compensation and stimulation to apply CPR to an economic corpse.

From the beginning, the policies were not to save lives – they were to prevent the hospitals being “overwhelmed”. Nowhere in the world, with the possible exception of Northern Italy, have hospitals been overwhelmed. This led to the production of the fake computer-generated peak forecast of 35,000 ICU beds being required in this “unprecedented” event. It was this alpine curve that had to be flattened so that demand could be brought below the available 5,000 ICU beds.

That peak was never more than a pimple. But notice that the “flattening the curve” mantra has now been switched from ICU beds to the raw number of cases. Because the number of ICU beds required has been so laughingly small. As facts changed, the propaganda changed to cover the backsides of all those who got it so wrong from the start. Instead of six months incarceration, the bans are being relaxed and lifted after a mere two months, although not so far in Dear Leader Dan Andrews’ Victoria. But not before incalculable damage has been done to millions of lives and hordes of small businesses, from milk bars to dentists. We are supposed to be flattered by the Prime Minister’s condescending paternalistic comment that because we had been good little boys and girls, we could get “an early mark”.

It has taken all this time for the politicians to see that the greatest threat to life was clustered in the retirement villages and nursing homes – the places where you might expect to find old people. Yes, the ones everyone said were at greatest risk. Again, hindsight was necessary to realise that. Instead, ministers were busy setting fire to a straw man – that old people would ever be denied intensive care. “No, not on my watch!”

The facts revealed by hindsight condemn the National Cabinet, whose members were spooked so easily by the projections of death and destruction swallowed so easily by the chief health officers, they failed to assess the risk of collateral damage to the economy. Disregarding warnings by several commentators (including on this site) that Australia would be plunged into a new Great Depression, the Prime Minister continued to claim that he had “got the balance right”. Even when it was clear that the only cases of COVID-19  were imported – including from the culpably mismanaged cruise ship Ruby Princess, neither the modelling nor the restrictions were amended.

Instead of slavishly following that “best medical advice”, the government should have used our hindsight. Ahead of time, and dead on the nail, we could have helped by warning that what the National Cabinet was doing could only bring a “told you so.”