A Delinquent Panda in Need of Lockdown Time 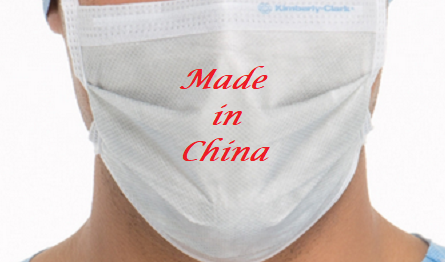 If COVID-19 has taught us anything in 2020 it’s that we have to address the two-hundred-pound gorilla — er, panda — in the room. Namely, that the CCP is an expansionist regime which is totalitarian, corrupt and never to be trusted. By falsifying information on a massive scale China ultimately facilitated the global spread of the COVID-19. Putting aside Kevin Rudd’s defence of the WHO—Chinese Communism’s ‘useful idiot’—in also failing to prevent the spread of the disease, we have now been given an authentic, picture-perfect vision of the CCP’s insidious self-protectionism. I realise that’s a big call, so let me back it up with three examples:

First, the recent news from US intelligence agencies that China may have resumed nuclear testing. The South China Morning Post, Reuters and the Daily Telegraph are all reporting that China may have set off secret  low-level underground nuclear blasts despite claiming to observe an international pact banning such tests. The Wall Street Journal was the first to report:

China might be secretly conducting nuclear tests with very low explosive power … according to a new arms-control report to be made public by the State Department.

That coming report doesn’t present proof that China is violating its promise to uphold the agreement, but it cites an array of activities that “raise concerns” Beijing might not be complying with the “zero-yield” nuclear-weapons testing ban.

The concerns stem from the high tempo of activity at China’s Lop Nur test site, extensive excavations at the site, and Beijing’s purported use of special chambers to contain explosions.

Another factor feeding U.S. suspicions is the interruption in past years of data transmissions from monitoring stations on Chinese territory that are designed to detect radioactive emissions and seismic tremors.

As to why China might want to bolster its nuclear weapon program, The South China Morning Post has produced a concise summary:

Second, is China’s continued suppression of free speech. Those who disagree with this regime mysteriously disappear. However, even more disturbing is China’s global influence in places such as Australia. For instance, The Washington Post and Sydney Morning Herald report that Drew Pavlou, a twenty-year-old philosophy student at the University of Queensland, is currently facing expulsion  for damaging “…the university’s reputation by condemning police attacks on student protesters in Hong Kong in November” as well as “putting a sign on the university’s Chinese government-funded Confucius Institute in March, declaring it was a COVID-19 “biohazard” and posting a photo of the act on Facebook.” 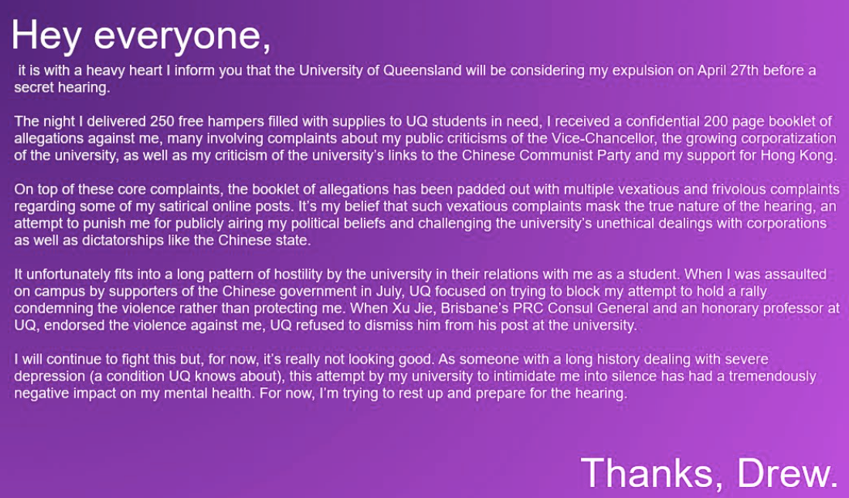 What is occurring by way of Chinese influence in Australia’s tertiary institutions should be cause for the deepest concern. Consider, for example, the footage of pro-Hong Kong demonstrators at the University of Queensland being harassed, and sometimes roughed up, by the fee-paying children of the Beijing regime’s elite.

Third, is the origin of COVID-19. The World Health organisation moved quickly to see that the Wuhan virus, as it was initially called, had no connection with China, replacing it with the more generic designation COVID-19, or according to The Medical Journal of Australia, SARS-CoV-2. It must not be overlooked that Lijian Zhao, the official spokesperson and a deputy director general of the Foreign Ministry has consistently tried to blame the United States as the origin of the pandemic.

But while some have speculated COVID-19 might have begun as a bio-weapon — a reasonable suspicion in light of Beijing’s other deceptions — it seems more likely it is a virus that escaped from one of the two virology labs in Wuhan , neither of them far from the infamous wet market said to be the virus’ ground zero. Just take a look at the following promotional video purportedly produced by the Wuhan Institute of Virology last year regarding its research into bats and coronaviruses. In fact, as has been recently reported, “the US government gave $3.7million grant to Wuhan lab at centre of coronavirus leak scrutiny that was performing experiments on bats from the caves where the disease is believed to have originated.

The Chinese laboratory at the center of scrutiny over a potential coronavirus leak has been using U.S. government money to carry out research on bats from the caves which scientists believe are the original source of the deadly outbreak. . . The Wuhan Institute of Virology undertook coronavirus experiments on mammals captured more than 1,000 miles away in Yunnan which were funded by a $3.7 million grant from the US government.

What’s more, Josh Rogin persuasively argues in The Washington Post that there is a clear laboratory connection to COVID-19, rather than the seafood market in Wuhan.

As my colleague David Ignatius noted, the Chinese government’s original story — that the virus emerged from a seafood market in Wuhan — is shaky. Research by Chinese experts published in the Lancet in January showed the first known patient, identified on Dec. 1, had no connection to the market, nor did more than one-third of the cases in the first large cluster. Also, the market didn’t sell bats.

It was the Indiana poet James Whitcomb Riley (1849–1916) who minted the aphorism ‘When I see a bird that walks like a duck and swims like a duck and quacks like a duck, I call that bird a duck.’ Upon noticing the surly, aggressive, deceptive and bellicose creature now glowering on the world stage as it seeks to blame others for its sins of omission and commission, we can identify it from past experience and repeated observation as Beijing’s 200-pound panda.

You Can’t Say That About Islam!