The French Have a Word for it, ‘Verrouillage’ 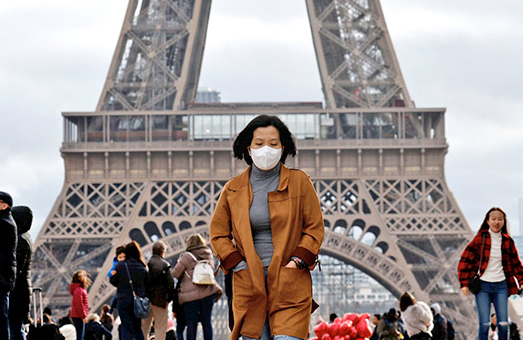 On Tuesday, March 17, at about 11.55am, our plane landed in Paris for a planned three-month stay. During our 24-hour trip, European Union leaders had decided to close their borders from Tuesday midday. Fifteen minutes later, the French border policeman smiled, with a hint of triumph, as he declared that my partner’s Australian passport was useless and entry refused. Fortunately, a more senior officer overruled him because we had landed on French soil just five minutes before the closure of the frontier to non-EU citizens.

So began our 48 hours in locked-down Paris.

On the way to our apartment, the driver told us the new facts of life for the next 15 days — at least 15 days, to be more accurate. Not only had the lockdown — verrouillage, as the French put it — closed all shops except those selling food, medicines and flowers, but even to leave our building we would require a formal attestation, to be produced on demand, to justify our presence on the streets. A new attestation was required each day. Our driver most kindly gave us a blank double-sided form to get us started.

Out of the car window I saw only long rows of graffiti-daubed metal shutters that concealed the falafel restaurants, little tailoring shops, hairdressers and beauty parlours. Nobody was outside having coffee or a glass of wine. The trip from the airport into the busy Marais district took a record-breaking 25 minutes.

Inside the apartment building, our first Paris friend, an 84-year-old woman who lives on the ground floor and had written to warn that she would not be opening her door to anyone, adding that we should have listened to her advice not to come. Disconsolately, I telephoned a dear friend who had told us she would come to dinner on Friday, only to now inform that me she had promised her children she would stay inside and not go visiting. She had married a Frenchman in Paris about 30 years ago. He had died, and the children had only one parent left. Full of sadness and apologies, she said she would miss our regular dinners. Next, I went upstairs to say hello to Pierre. Very cautiously, he opened the door and, though smiling, he strictly maintained the prescribed 1.5 metre ‘social distance’. Clearly, he was not going to take our friend’s place at the dinner table. He advised us to go back to Australia.

I had known about the closing of France’s art galleries and museums, and of restaurants and cafés, before I left Australia. But now we were confronted with the loss of anything resembling normal life. Events had moved fast. Last week, a Paris friend attended a funeral where mourners hugged and kissed cheeks. There would be no more of that. Over the weekend, the French government had seen no evidence of cautious behaviour and decided to crack down. Its minimum 15-day lockdown was broadcast to the nation on Monday evening (early Tuesday morning in Australia).

Also, while we were in the air, our own government’s travel advice was upgraded to ‘Do not travel’, with all Australians urged to return as soon as possible, before it became difficult, or perhaps impossible, to get back at all. A phone call to a London friend confirmed that it was time to cut things short. She had heard Heathrow had begun discussing a potential closure with the UK government in the event that planes stopped arriving. By late Tuesday afternoon, we had re-booked to leave Paris for Sydney on Thursday afternoon, and I started unpicking the various visits and side trips we had planned.

That left us with Wednesday to ‘enjoy’ what remained of Paris. We filled out our mandatory attestation forms that morning, carefully ticking the boxes to get some food and to take some ‘brief personal exercise’ and avoid ‘any collective sporting activity’. At 9.00am, two lonely buses represented the only traffic on the rue de Rivoli, normally packed with cars, delivery vans and commuters emerging from the Metro.

We cheated a little by taking the long way to the St Paul supermarket via the Île St-Louis. A few people were walking their dogs (a permitted activity). No tourists were sight-seeing or gypsies begging (now prohibited activities). The supermarket was much emptier than usual. Signs declared that only a certain number of people could be let in at any one time and that customers must observe ‘social distancing’. The staff were pleased to see us. Nobody was queuing at the butcher or the bakery counters. Our planned route home through the seventeenth-century Hôtel de Sully, with its garden and back door into the Place des Vosges, was closed like the rest of Paris. We stayed inside for the rest of the day and re-packed luggage.

Thursday morning was lifeless, except for our gardienne, who wore a face mask and rubber gloves while disinfecting the lift, the door handles and heavy metal grille. We made it back to the airport, again in record-breaking time, where we found no queues at check-in despite reduced staff. All airport shops were closed and the airline lounge was serving its last day of pre-flight food and drink. The 500-plus seat A380 plane out of Paris carried just sixteen people: three in first and business class, and thirteen in economy. A Frenchwoman was flying to Canberra to join her Australian partner, but via Perth in order to land on Australian soil to beat our own border closure, and only after that to Sydney and on to her destination.

After 48 hours in Paris and 48 hours going there and coming back, I cannot recommend this international jet-set lifestyle.However, I would advise anyone to find creative ways to maintain and strengthen personal relationships. For example, instead of texts, emails or Facebook, pick up the phone and talk so that people hear your voice. If you are not required to isolate yourself, you can still meet face to face, to look into each other’s eyes, even though close physical contact must be avoided.

Meanwhile, my 14-day seclusion begins. At least it’s at home in Sydney.

Another Betrayal of Israel and the Jews