Journal of the Plague Month 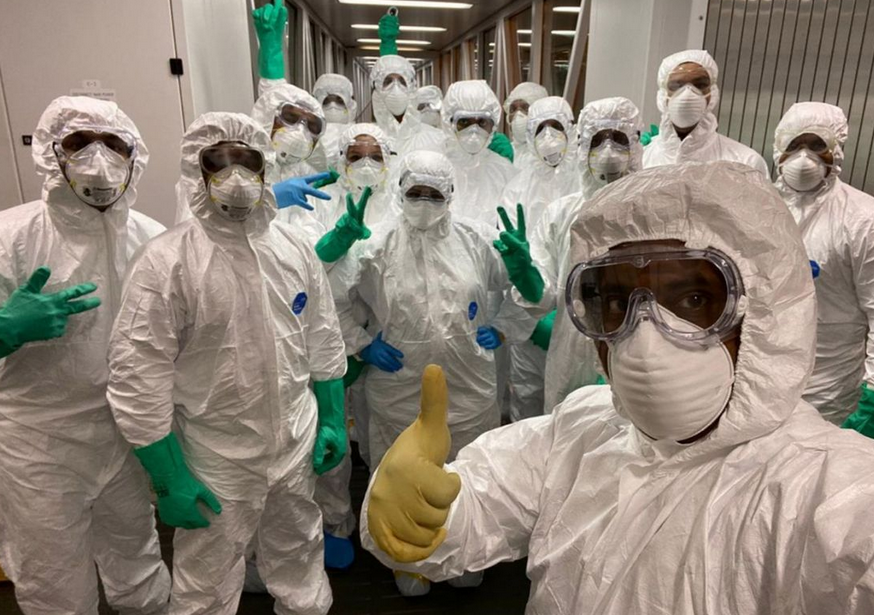 On the day that Britain declared war against Germany in 1914, my grandfather, a Boer War veteran who managed a pub on Liverpool’s dock road, disappeared for some hours from the bar. As my grandmother feared, he had gone to rejoin the colours. When asked if he’d been in the army before, he denied it, fearing that he’d be held back to train raw recruits. Though he tried to appear as raw as possible, he was called out from the first exercise in squad-bashing by a sergeant-major who had rumbled him.

“You’ve been in the Army before, son. And you didn’t leave it a private either. What was your rank?”

“Well, you’re a colour-sergeant again from tomorrow morning. Be back at seven.”

So he reluctantly spent four wartime years training recruits for the trenches. But he had an appointment in Samarra, and just after the war ended, he died from the Spanish influenza that swept the world that year in two stages, spring and autumn 1918.

Did he catch it at the camp where he had been putting raw recruits through their paces? It’s very likely he did. Transit and training camps were among the places that soldiers passed the “Spanish flu” virus on to each other, both during the war and afterwards when they were returning home, many to places halfway across the world. The war’s end was one of the reasons why the epidemic spread so rapidly and so far after the Armistice.

It reached Australia in 1919, infecting an estimated 40 per cent of Australians and killing some 15,000 people. Not a small number in a country of five million, but Australia was nonetheless the country with the lowest death rate per thousand of population in the world. That was due in part to a strict but well-managed policy of quarantining both soldiers and those who had contact with them. States took over policy from the federal government, closed their borders to suspected carriers, and ordered those who had already crossed them into camps. Showing an early talent in making lemonade out of lemons, the Australians and the authorities turned quarantine into what became known as “the long picnic” with regular meals, exercise regimes, and poetry and writing competitions to pass the time.

Everywhere else was much grimmer. Estimates of worldwide deaths from the Spanish flu vary from 17.4 million to 100 million. It remains a topic of serious academic controversy. And because many areas of the world had little or no honest and effective record-keeping in 1919, there is unlikely ever to be settled agreement on the numbers.

That makes any comparison with the coronavirus epidemic—now declared a global pandemic by the World Health Organisation—very hard to draw. Thanks to the Johns Hopkins University tracking map of the spread of the coronavirus, we know more about the present than the past. Essentially one month after most of us became seriously aware of the virus, we have 121,564 worldwide cases, 4373 deaths and 66,239 recovered patients. Those figures are high but they don’t seem too alarming compared to Spanish Flu estimates (but anyone reading this will have later and higher figures). And today we have antibiotics, better medical techniques, and higher levels of good health that should generally guard us better against infection.

Yet most experts—notably including the science journalist Matt Ridley, whose previous scepticism about such threats as the SARS epidemic proved accurate—warn that the eventual numbers of infected and dead could be very high. Their reasons are that the virus is an unusually aggressive one; that it has a long incubation period and so is spread by people unaware they’re infected; that as the Spanish Flu had two stages, so there are three kinds of the coronavirus which an unlucky person might catch in succession; and that despite the last paragraph, our defences against it are few and weak.

What then might protect you against it? Well, there might be a vaccine soon, but it’s not here yet. Being generally in good health will make you more resistant to infection—one of the reasons why the Spanish flu killed so many young people was that it ravaged their immune systems. In the northern hemisphere the return of warm weather will help, since that heralds the end of the flu season generally. It also explains the relatively small number of cases in the southern hemisphere—Africa, Latin America and the Antipodes—which are enjoying summer. Mark Steyn was, as usual, quicker than your average journo to see that this was an argument in favour of global warming, which would bring us warmer weather the year round. And though it sounds like a debating point, it is in fact one example in a larger argument that global warming (whatever its origins) has benefits as well as drawbacks, so that policy should concentrate on adapting to its effects of both kinds as much as in trying, not very effectively, to retard them.

Until a vaccine is developed, the most effective response to the coronavirus seems to be that developed by the Australian state governments in 1919: socially isolating the infected and encouraging the non-infected to isolate themselves. That seems to be happening voluntarily in the northern hemisphere: restaurants, public transport and cinemas all report business down. And for many of those most threatened by the virus, namely older people vulnerable to annual flu threats, it may be happening involuntarily too: sadly, in our anonymous society, their lifestyles are already cases of social isolation.

We’ll know in the next few weeks, however, if a policy of self-quarantining can significantly retard the spread of the virus. Britain’s health authorities suggest that cases of infection should peak in about a fortnight. At the time of writing the UK official figures are 456 infected and eighty-three deaths. Will they rise by the time you read this to something like Italy’s 10,149 infected and 631 dead? (And what will Italy’s figures be then?) Or will they show a lower rate of increase? For the latter result would suggest that the people of the democratic world, especially its Anglosphere component, still have something of the spirit of social responsibility and voluntary collectivism that Australians demonstrated in 1919.

Or will the evidence, whatever it is, have little or no influence on what the public and the pundits both conclude? For one of the depressing aspects of this month has been the degree to which partisan ideology and politics have dictated many responses to the crisis—less among the general public whose main foolishness has been wrong-headed panics such as hoarding toilet paper for a virus that doesn’t cause diarrhoea than among the pundits. My favourite is the title of Ben Kelly’s article on the Reaction website: “The Coronavirus Crisis: The UK Should Delay Brexit”. It provokes immediate scepticism. But numerous commentators have been using the pandemic as an argument that Brexit and/or Trump—for progressive rhetorical purposes the two can be treated as the same thing—have been proved wrong on the value of European and international co-operation.

In fact, the Italian government complains that when they asked their European partners for supplies of medicines and equipment to deal with what is now a desperate emergency, they received little or nothing and had to turn to China. China did respond generously, but one need not be a cynic to doubt the Chinese Communist Party’s motives. It badly needs to recover some of the respectability it lost by its early censorship of the coronavirus outbreak and failure to warn the WHO in a timely way. And the WHO itself has been less than forceful in demanding more transparency from Beijing—not the best demonstration of international co-operation.

That was less than two months ago, but some pundits with short memories are praising the collective morality of the Chinese people for successful taming the pandemic. Such praise certainly seems to be owing to the Singaporean and Taiwanese authorities who summoned up the willingness of their people to volunteer sacrifice in the general interest. That was not what we saw on our television sets and laptops when we watched extraordinary scenes of the Chinese police brutally beating people and locking them in their homes to enforce their collective morality. Not quite the long picnic of 1919.

As for President Trump’s response to the crisis, he is certainly open to criticism for continuing his political rallies—but not for his willingness to protect Americans by banning flights from China. That’s his defence against the charge that he’s been slow in tackling the emergency. The fact-checkers got to work on this flimsy excuse with a will. Did he ban such flights? Well, er, yes. Early on? Okay, on February 2 from China, expanded to cover Iran on February 29. Did the Democrats criticise him for this? Some did, but not their presidential candidates. And did the restrictions save a lot of lives, as Trump claimed? Let me quote the full response on that:

experts say there isn’t enough data to make that determination. A study in the journal Science found the various travel limitations across the globe initially helped to slow the spread, but the number of cases worldwide rose anyway because the virus had already begun traveling undetected internationally.

That’s the kind of thing that gives nit-picking a bad name. And there are many more examples from the mainstream media. When we look back on this journal of the plague month, we may reflect that it has been one of the worst pandemics since records began. But the pandemic is as much one of partisan ideology as of any other virus.

It’s not a virus my grandfather would have been able to understand.