Australia, Citizenship and the Common Bond 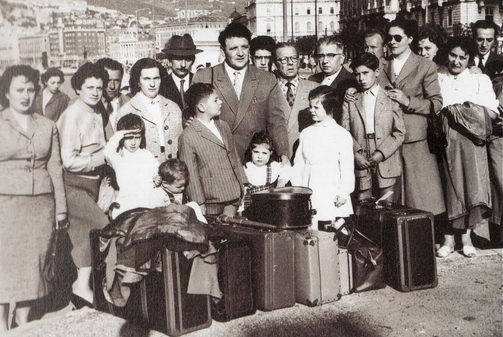 Settling in a new country is not easy. The legal formalities of naturalisation are only a part of what joining the Australian community involves. The story of a Dutch immigrant woman who came to Australia offers a way to begin looking at this question, and asking what lies at the heart of being Australian.

There is a family photo, taken in 1956 at Cowan, at that time a small village to the north of Sydney.[1]   A woman is walking along the edge of a dirt road; gum trees can be seen in the background. There is no footpath, just a gravel track. She is wearing well-made shoes as she pushes the baby-stroller in which her infant is sleeping over the irregular surface while holding the hand of her daughter, age four. She is probably going to the Post Office, the only shop in Cowan. However, it is the ocelot fur coat the woman is wearing which strikes a strange, somewhat foreign note in the bushy landscape.

The postmaster and local Justice of the Peace, something of a know-all, sees himself as someone important, a representative of government, who knows all the residents of Cowan, including this Dutch woman, a ‘New Australian’ who lives with her husband and her two children at her father-in-law’s place. She speaks, as she always will, with a strong Dutch accent, even though she understands English. The postmaster always talks to her very loudly and slowly.

The woman had been born in the Netherlands East Indies (now Indonesia). The White Australia policy was then in force, so the authorities insisted on a medical inspection in Amsterdam of her two children to establish that the family was really white before they could come to Australia. The doctor thought the little boy’s face was a bit too brown, so he asked the mother to take off his nappy. Satisfied by the whiteness of her son’s buttocks, the doctor signed the necessary papers.

So began a new life for a foreign family in Australia. They had two more children who, under our law, automatically became Australian citizens. Later, the parents and the two older children became naturalised Australians. For the children, learning English and absorbing the culture of Australia was a natural part of growing up, although they also felt the pull of a second culture. Their parents spoke Dutch at home, participated in the Dutch-Australian community and took occasional trips back to the Netherlands to see family and friends.

For the parents, however, joining the Australian community was a much longer process. Learning a new language as an adult can be difficult and demanding. In the beginning, an adult can feel reduced to an almost infantile state. On a bad day, even a shopping trip can collapse into lexical and grammatical chaos. Total concentration is required to follow and contribute to a genuine discussion, and it is harder still to make sense of the conversational snippets, twists, turns and slang at a lively barbecue. The Dutch woman began putting together a social life in Cowan by knocking on the door of the woman who ran the roadside truckers’ café to ask if she could have some English conversation. More often, in the early years, the parents could only be their real selves by speaking Dutch, in the Dutch community.

Gradually, however, through employment and meeting parents of their children’s school-friends, they made native-born Australian friends and could begin the long journey towards becoming part of the Australian community. Even after 50 years, however, the unusual accent, occasional grammatical slips and little gaps in vocabulary marked them as people who came from somewhere else.

Joining the Australian community was at least a little easier for Dutch people whose original culture rested on similar foundations as that of Australia. The Dutch language is closer to English in structure than perhaps any other; through England, there is some shared history; and through Christianity, some shared moral beliefs and ethical understanding. Today that has changed as immigrants come from Asia, Africa and the Middle East.

Since 2006, those applying for citizenship have been required to pass a test about Australia’s history, values and traditional and national symbols, now based on a booklet Australian Citizenship: our common bond.[2] Assuming someone has learned enough English to understand the booklet and memorise the relevant facts, the multiple choice questions mean the hopeful applicant can know, or perhaps guess, the right answers without having to express it in a sentence of their own construction. The booklet and the test may be a useful thing, hopefully a starting point for the journey towards full participation in Australia life.

Citizenship makes demands and imposes duties. The outsider must give up something to enter into a new community. Participation in a nation requires learning about and joining in the story of that nation. Stories, memory and customs tell us how to behave and explain why we have come to behave in that way. We are expected to take on an ethical responsibility for what our country has done, what it is doing, and what it will do. We are not responsible only for what we do as a individuals. Citizenship imposes obligations. Australians must obey the law and vote in elections. The citizenship booklet also refers to our duty to defend Australia:

While service in the Australian Defence Force is voluntary, should the need arise it is vital that all Australian citizens be committed to joining together to defend the nation and its way of life.

Such a commitment may require that citizens sacrifice their time, their own personal goals in life and perhaps their lives. Australia’s defence has certainly included fighting overseas perhaps in a former homeland. For the Dutch family, this never occurred; but it has for Afghans and Iraqis.

Ritual and ceremony allow us to participate in our country’s traditions, to do something together and put aside narrow self-interest. Australia holds few demonstrations of its nationhood. The flag is flown, but flag-raising ceremonies are fairly rare. The National Anthem is sung, but many of us do not know all the words, perhaps only a few. The Governor-General acts as our head of state, but without much pomp. We may enjoy the grandeur of other countries’ public ceremonies, but grandeur does not travel far in Australia and the tall poppy is quickly cut down.

ANZAC Day is probably our most meaningful national ceremony, with its dawn service and ritual prayer: ‘Lest we forget’. The citizenship booklet observes:

Anzac Day is a solemn day when we remember the sacrifice of all Australians who served and died in wars, conflicts and peacekeeping operations. We also honour the courage and commitment of all servicemen and women.

A solemn day is a day separated from other days. By inference, we give up something of the ordinary routine of life to honour the courage and commitment of others. A whole page is given to ‘the ANZAC legend’, describing its history, and which says that ANZAC Day:

…honours the qualities of ordinary servicemen and women: mateship, endurance and humour in the face of adversity.

ANZAC Day is a remarkable Australian creation. It is restrained and not triumphal, unlike the now-forgotten Empire Day. To the extent that a military commemoration ceremony can be, it seems rather Christian in its evocation of sacrifice, courage and ordinariness. For new Australians who may not have noticed the ever-present war memorials in country towns, suburbs and the centre of the cities, let them be warned that ANZAC Day demands respect. In 2017, the young Muslim media personality Yasmin Abdel-Magied decided she would use ‘Lest we forget’ to push her political views: she posted ‘Lest. We. Forget (Manus, Nauru, Syria, Palestine …)’. A very sharp public reaction obliged her to apologise.

The citizenship booklet assures new arrivals that there is no official religion, that government is secular and Australians are free to participate or not in religious life and worship. All true. Yet the booklet points out:

Australia has a Judaeo-Christian heritage, and many Australians describe themselves as Christians. Australia has public holidays on Christian days such as Good Friday, Easter Sunday and Christmas Day.

One might add that the preamble to the Constitution speaks of the people of the former British colonies ‘humbly relying on the blessing of Almighty God’ in deciding to unite into one indissoluble federal Commonwealth, and each chamber of Parliament still begins its sitting day with a Christian prayer. This Judaeo-Christian religious heritage is both highly influential yet understated. The very distinction between what is secular and worldly and what is sacred or religious finds its original and radical expression in Jesus’s words recorded by St Mark and St Matthew:

The separation of political from religious authority was totally repugnant to the Roman Emperors of that era who held the priestly office of ‘Pontifex Maximus’, were often declared divine and to whom ritual sacrifices were made as proof of loyalty. Christian influence underlies core Australian values of a ‘fair go’ and ‘mateship’. The citizenship booklet states:

…we believe in a fair society, where everyone deserves a ‘fair go’. This means that what someone achieves in life should be a result of their hard work and talents, rather than their wealth or background.

It was the claims of Christianity that salvation is offered to the whole of humanity and that every person has equal dignity in the sight of God, which founded the doctrine of equality before the law.[4] From this, ‘a fair go’ is a very short step away. Mateship, too, finds a Christian origin. The citizenship booklet defines mateship, under the heading of ‘Compassion for those in need’, thus:

In Australia, there is a spirit of ‘mateship’. This means we help and receive help from each other in times of need. A mate is often a friend, but can also be a total stranger. A mate might take a meal to an elderly neighbour, drive a friend to a medical appointment or visit someone who is lonely.

Kindness and charity are virtues found in various religious and non-religious traditions, but the notion of unselfish help for a total stranger, who might even be one of our enemies, comes from Christianity.

A culture that works

Since the foundation of modern Australia in 1788, the original and subsequent inhabitants created a national culture that bridged the generations, coped with social and religious differences and sustained us through war, economic crises and natural disasters. While we acknowledge the dispossession of Aboriginal communities, we may too often overlook that many indigenous people chose to join and adopt the new community as their own. More than 80 per cent of indigenous people live in cities and non-remote areas in ways not markedly different from other Australians. Australian culture has brought together convicts and free settlers, fortune hunters and refugees, and similar and different traditions. So far, despite the worst efforts of some, it has worked.

That is something to be proud of, not just today, but on any day of the year.

[1]  My source is Survivor, Sydney 2009, a privately circulated family memoir of a Dutch immigrant woman, who had been interned a prison camp by the Japanese Army, and who came to Australia and started a new life.

[4]  I am indebted to Tom Holland, Dominion: the making of the Western mind, London 2019, for this insight.