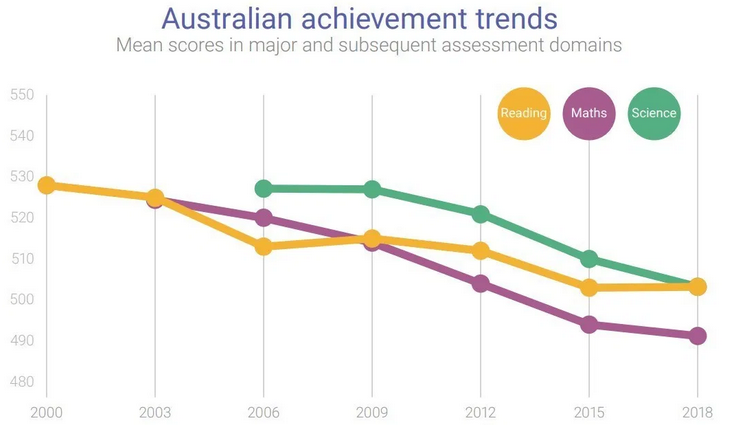 All my kids went through the public education system, but not anymore. A year or two ago, I had some concerns about the progress one of my kids was making and, after speaking with the head of senior students, I was told there was nothing the school could do to help. Instead, he advised me to vote for a particular political party which would put more funding into “education”. If I found the system lacking, my vote and a lot more taxpayer dollars would help to set it right.

Somewhat taken aback by his brazen politicking, I summed up his silliness with the rejoinder, “I don’t believe you can fix a broken system by making it bigger.” Of course, I was right. Keep reading, especially today, when the news is that Australian kids have slipped few more notches in terms of international performance ratings. It’s a genuine emergency for which I also offer some solutions.

First, the evidence of the escalating crisis in the classroom. The Program for International Student Assessment (PISA) measures 15-year-olds’ abilities in literacy, numeracy and science. In all three areas we have been trending down since 2000. Australian achievement trends, as rated by PISA, is reproduced atop this post.

Suggestions that pouring more tax-payers’ money into education will magically fix broken systems are not supported by the evidence. Between this PISA assessment and the last, an additional $20 billion has been “invested”, as the politicians and teacher unions like to say, in schools. Meanwhile, the nation of Estonia leads the world in literacy and science outcomes, yet spends just half what Australia does per student. The near-religious fervour with which Labor and unions insist that more money will solve everything is ham-fisted, designed to emotionally manipulate gullible voters who “feel” more than they think into giving power to people whose record has been one of escalating failure. The experts will disagree, but those same “experts” and their type of thinking got us into this mess. Clearly an entirely new approach is needed.

Or is it? Is the challenge that we need an entirely new approach, or that we need a return to what was working better in the last century? Let me start by addressing what is perhaps not the most obvious factor working against our children’s improved performance: federalism, and Canberra’s ongoing efforts to seize more power for itself at every opportunity. When the states resist, the High Court creatively ignores the principles of federalism on which the nation was founded, as Quadrant contributer James Allan has noted. The result has been an increasingly centralised and homogenised system replete with predictable bureaucratic waste and inefficiencies. Federal education poobahs duplicate the states’ buildings and administrators, and they do so without creating anything we didn’t already have and, clearly, without making anything better. As Professor Allan put it in 2014:

In terms of economic benefits, federalism stands or falls on its ability to create a competitive environment where different States try and do different things and there is plenty of competition. This is taken for granted in my native Canada, as well as in the US. Here in Australia it is widely seen as bizarre. Australia strikes me as the home of ‘one-size-fits-all’ thinking. Everyone in every part of the country ought to pay the same taxes, get the same services, have the same education system, and so on. So in Australia federalism has been reduced to pious talk of ‘co-operative federalism’. As far as I can see there are no benefits at all that flow from having layers of state duplication, and then a sort of forced co-operation, to achieve exactly the same outcomes. You get the extra costs of federalism without any (or very, very few) of the extra benefits of federalism.

The true power of federalism for creating a more prosperous, successful and contented nation lies in the potential of six states and two territories to each design the best systems and policies they can, compete and compare outcomes. Where outcomes are clearly inferior, informed adjustments can be made. Where differences exist merely on a philosophical or ideological level, federalism as orginally intended allows citizens of the Commonwealth to migrate to where the systems and policies on offer better align with their own preferences and values, creating more opportunity for more people to be happy with their government.

The National Curriculum experiment has completely failed. Here is its website. Pay a visit, poke around and see if you don’t conclude that it is a soaring edifice built on a shaky foundation of trendy edu-speak and political correctness. Consider, for example, this summary of the education theorists’ insistence that mathematics and science (and all other subjects) be taught with an emphasis on Aborigines and indigenous cultures. Here are two examples:

Students will have opportunities to learn that Aboriginal and Torres Strait Islander Peoples have longstanding scientific knowledge traditions and developed knowledge about the world by:

# observation, using all the senses

# making generalisations within specific contexts such as the use of food, natural materials, navigation and sustainability of the environment.

This fascination with indigeneity is just one aspect of  the federal Education Department’s charting of the path to knowledge and, as the latest PISA results demonstrate, it ain’t working. The solution: get the feds out of the game and let the states be what they were intended to be — sovereign and competitive. True, one couldn’t expect much of, say, Victorian Premier Daniel Andrews initiatives, except more pleasuring of teachers’ unions and courses in gender fluidity etc. But some states could well tear up the old rules and start afresh. Their success would serve as proof that their approach works where others fail, demonstrating empirically which approaches to embrace and those to be abandoned.

The other essential reform is the underwriting of freedom via parental choice and discretion. Instead of funding schools directly and empowering them to pursue flights of fantasy with indulgent educational experiments, parents must be given the funding to be spent on approved education resources as they see fit. Yes, I’m talking about vouchers. Divide the total amount spent on education by the number of students and issue those vouchers to families, which will have the freedom to spend them on any school they chose, private or public. Complete portability of funding will create a competitive marketplace, which always delivers best outcomes for consumers, in this case students.

Ending the emotional and partisan war between public and non-government schools lets tax-payers decide where they get the best value for their vouchers. Some public schools will get much more revenue as they demonstrate success, and those which see an exodus of students will be forced to find improvements through imitation and efficiency. Either that or they close.

If we are serious about improving education outcomes we have to be prepared to prune the branches which yield no fruit or bad fruit.

It is only fair that every student in Australia get equal help from the government to obtain an education equipping them to be functioning and productive contributors to society, rather than burdens upon it. Competition will raise the level for all, lifting those who can deliver what they’re paid to deliver, and sinking those that can’t or won’t.

The greatest resistance to the idea of education vouchers will come from those who realise such a return of power to parents will also empower them to choose what values and political indoctrination their child receives. Make no mistake, this is a grave threat to the anointed elites’ agenda to implement their radical vision of society by means of classroom indoctrination.

The evidence is undeniable that Australia is facing an education emergency, with no real solution offered. More of the same will yield more of the substandard same. To arrest the decline and fix the problem of a centralised, homogenised and failing system, power must be returned to parents and states. It’s as simple as A-B-C.

19 thoughts on “The Dumbing and Dimming of Australia’s Children”

Australia, Citizenship and the Common Bond