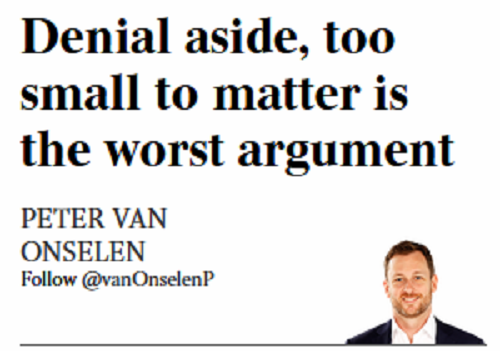 Could there be a shallower intellect deployed in the field of public commentary than that regularly, and apparently without a hint of embarrassment, flaunted by Professor Peter van Onselen?  I doubt it. Have a look at this weekend’s offering in The Australian. The columnist takes issue with the sane position regarding CO2 emission reductions: as we are responsible for  only 1.3 per cent of global emissions, anything we do will be pointless:

Opponents of action on climate change have one simple argument they fall back on time and time again: what’s the point of Australia doing more to reduce its emissions when they account for less than 2 per cent of global emissions?

I’ve heard this trotted out in print, on television and on radio. And of course it gets endlessly echoed on social media, too. It really is the only argument for not doing more that opponents of climate change action have at their collective disposal. Other than denying the existence of the phenomenon in the first place.

I will return to the words I have underlined later. First, for a laugh, let us look at van Onselen’s logic:

If the rest of the world isn’t doing enough, why should we? It’s the argument of the sedentary couch potato. It genuinely baffles me anyone with the privilege of a public platform could use such flawed logic. Let’s test what life would be like if that approach were taken across the board.

There would be little point in individuals giving money to charity. Why donate $100 when that amount of money is no more than a tiny fraction of the millions received by an organisation? Much less than 2 per cent, in fact.

Why vote? One vote is so insignificant in a nation of millions. I’m sure such thinking contributed to, for example, plenty of anti-Trump Americans not bothering to vote at the 2016 presidential election. That didn’t have an impact.

The logic for inaction simply because as a nation our contribution is fractional really is weak.

What baffles me is why an organ as frequently sensible as The Australian would place column inches at the disposal of such flawed logic.  A couple of points: people give to charity what they can afford in the belief that every little bit helps. They do not give to the extent that they can no longer pay their own bills. Now, back to the simple fact that our admissions in global terms are negligible to the point of irrelevance, which PvO dismisses thus

It really is the only argument for not doing more that opponents of climate change action have at their collective disposal.  Other than denying the existence of the phenomenon in the first place.

Most people who deploy the ‘what’s the point’ argument do so because they do believe that catastrophic man-made warming is a scam or, at best, wildly overstated. It is rational scepticism that underpins their position, with the ‘what’s the point’ argument flowing from that and the fact that the rest of the world is largely doing nothing.  Two of the three largest emitters — China and India — are massively increasing their emissions.  There are, in fact, some on the side of the rational who do accept the theory of anthropogenic global warming — Bjorn Lomborg most notably — but believe there are better and more helpful ways to spend the money. In his parroting of warmist talking points Van Onselen totally ignores these views.

The voting analogy is even dumber.  It costs nothing to vote.

Next we are treated to an old chestnut:

Given that Australia has one of the highest per capita emissions rates internationally only underlines the importance of the need for action to bring emissions down. Even if larger countries emit more. Even if developing nations use more dirty energy than we do.

Why does Australia’s high per capita rate of emissions underline “the importance of the need for action”?  Our per capita rate is driven by our large land mass, small population and relative state of development.  India, China and the Third World are working assiduously to get their own per capita rates i.e. standard of living, to our level.  Once again, if you don’t accept the ‘science’, why accept this argument?

Now to the bushfires:

In the context of Australia’s bushfires and drought, I’ve heard the same commentators who wheel out the defence of inaction also mock the notion that climate change has a role to play. They refer to Australia’s history of droughts and fires. They point out the fires have been started by arsonists and lightning strikes.

You will note that PvO conveniently neglects to mention the real villain in this melodrama – accumulated fuel loads. We then get a discourse on listening to the experts regarding longer and more severe droughts, longer and earlier bushfire seasons, for all of which there are legitimate counter-arguments, such as the fact acknowledged by the IPCC that, globally, the land area affected by bushfires has been decreasing. Indeed, when it comes to recounting Australia’s fire history, PvO’s favoured sources are often just plain wrong.

Now we get the argumentum ad verecundium:

It’s populism gone mad. You wouldn’t challenge your doctor who uses their expertise to cut out your cancer. Or question the pharmacologist who has calibrated the medicine you rely on to treat a serious illness. Certainly not when there is an overwhelming consensus in their fields about the issue at hand, as there is among scientists on climate change.

Last year I had my appendix removed.  Six months later I was rushed to hospital with a burst appendix, which must not have been entirely removed.  Some months ago, a young boy died because his mother was told, repeatedly, that his stomach pains ware gastric problems.  Burst appendix again.  So don’t tell me about the infallibility of doctors.  Yes, I understand PvO is referring to the science, not its imperfect practitioners. But modern medicine is a considerably more advanced and rigorous discipline than ‘climate science’, as Climategate so spectacularly revealed. Noble cause corruption and rent-seeking pervade this bastard field of endeavour.

Finally, PvO can’t resist a swipe at Scott Morrison.  He concedes the Prime Minister was within his rights to take a holiday but calls out his ‘hypocrisy’ in criticizing former Victorian Police Commissioner Christine Nixon for her alleged dereliction of duty during the Black Saturday fires:

Anthony Albanese chose not to criticise the Prime Minister for the timing of his holiday, which is more understanding than Mor­rison showed then Victorian Police Commissioner Christine Nixon back in 2010 when she merely went out to dinner during the Black Saturday bushfires.

It’s not quite the same situation, PvO.  Ms Nixon didn’t just go out to dinner. She had a hair appointment in the morning, a meeting with her biographer in the afternoon and then dined at a gastro pub in the evening.  A rather relaxed day, it seems to me. Asked during the royal commission that followed why her phone records show she neither received nor made any calls during the course of that three-hour meal, Ms Nixon denied turning off her phone; we must accept her at her word. But unlike the PM, she was directly in command of Victoria’s emergency response.  She had a gazetted role in decision-making and overseeing the decisions of her subordinates. As bushfires are a state responsibility, Morrison had no official role whatsoever. As he admitted on Sunday morning (Dec 22) after returning from Hawaii, he now regrets leaving Australia. “Australians are fair-minded and understand that when you make a promise to your kids you try and keep it,” he said. “But as prime minister, you have other responsibilities, and I accept that and I accept the criticism.”

I know The Australian strives to achieve balance, but is PvO the most cogent voice the Left has to offer?