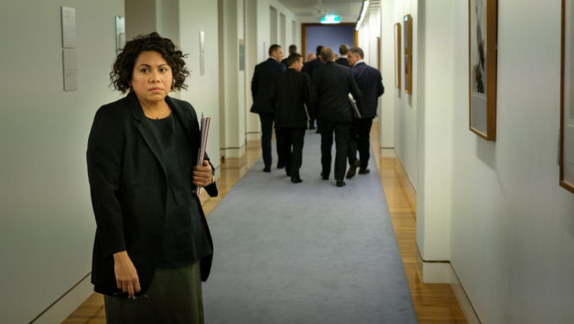 Propaganda is most persuasive when it is pervasive.  Right now we are being subject to a massive propaganda campaign designed to advance the Aboriginal sovereignty, agenda and it is being masterminded and largely paid for by Their ABC.

I have spent the best part of six months writing a review of Bruce Pascoe’s bestseller Dark Emu,  which postulates that Aborigines were not nomadic hunter-gatherers but a sophisticated, sedentary, agricultural society with a pan-continental system of government.  The ostensible aim of Dark Emu is to correct a purportedly mistaken view of Aborigines so that we can all move forward together.  But the real aim is to foment a sense of grievance among Aborigines, and a sense of guilt among whites, that will enhance the chances of a referendum to enshrine an Aboriginal advisory body into the Constitution.  If that happens it will pave the way for judicial activists to continue the work they commenced with the Mabo decision and grant some form of sovereignty to Aborigines.  As part of the propaganda campaign, Dark Emu, will become a two-part ABC documentary sometime next year I will speak more of my book Bitter Harvest in the December edition of Quadrant.

Another  certainly more overt weapon, and probably more powerful, in this campaign is the ABC mini-series Total Control, currently screening on Sunday nights and drawing big ratings.  I have been watching it so that you don’t have to. The best word to describe Total Control is ‘incendiary’, both figuratively and literally.

In a nutshell, the plot, which borrows heavily from recent events, goes as follows: The Coalition is in power.  The leadership of Prime Minster Rachel Anderson, played by Rachel Griffiths, is under threat from the right wing of her party.  I think of her as Julia Turnbull – the resemblance is uncanny.  During the course of the show, she is subjected to a ‘ditch the witch’ call and, when faced with a spill motion, comments to her chief of staff that ‘they’re not afraid I’ll lose this election, they’re afraid I’ll win it’.  Where have I heard that before? And, of course she stabs her protégé, Alex, in the back without hesitation to save her leadership.

Anyway, she has a one-seat majority, a difficult Senate and a hostile right wing to cope with.  When Aboriginal health worker and single mum Alex Irving, from Winton, gains momentary fame by facing down an armed killer, she comes to the attention of Julia, sorry Rachel.  She uses a captain’s call to offer Alex a casual Senate vacancy, in the belief that it will boost her popularity.  Gee, where have I heard that before?  After some angst, Alex accepts the appointment and goes to Canberra, where it all falls apart from day one, Julia, sorry Rachel (dammit, I’ll just call her PM from now on), being content to drop Alex in at the deep end where she suffers all manner of slights and patronisation.

However she soon asserts her value when the PM is monstered by the US Secretary of State to lease a large area in central Queensland for a new base. You guessed it, the base is to be on native title land around Winton and the PM wants Alex to negotiate a deal with the native title holders.  This she does, getting them all to sign up on the basis of a significant compensation agreement.  She returns in triumph to Canberra.  However, her deal is not popular in the party room and she has to lobby hard to get it accepted.  Eventually her amendments are accepted and the bill is ready to go forward.  Then, Immigration Minister Damien Bauer mounts a challenge. Aboriginal Affairs Minister Kevin Cartwright  pledges to the PM  the support of his bloc provided he gets Home Affairs and she drops the native title deal from the bill to acquire the land for the base.  Alex goes off to attend the sudden funeral of her mother unaware that she has been shafted.  The bill goes through while she is en route home to Winton .

However cynical and divided they are, you have to say this government gets things done.  No sooner is the bill read for the third time than the contract has been let and the construction company has opened a local site office in Winton.

Alex’s  mob are now very hostile, both to her and the government. But Alex is not taking this lying down.  She confronts her ex-lover, Tom Campbell, one of the native title holders, and tells him:  ‘I f***ing hate them.  I swear on my mother’s grave I’ll make the c***s pay. You know what to do.’ (This being the ABC, the obscenities are de rigeur. What’s the point of taking public money if you can’t offend your patrons?) She  hands him a can of petrol and a lighter.  Tom may not be the sharpest tool in the shed but he does know what to do.   He sets fire to the construction company’s site office and films the whole affair, renouncing his Australian citizenship and announcing the establishment of an Aboriginal state.

Alex is expected by the government to abandon her seat and remain in Winton.  But she is made of sterner stuff and returns to play the political game and, presumably, to wreak what vengeance she can.  Besides she has another task to undertake.

There is a sub-plot which involves the cover-up of the unlawful death in custody of a young Aboriginal girl.  This girl’s cellmate, Jess,  escapes custody and contacts Alex by phone telling her that she has video evidence that will expose the cover-up. They arrange to meet up, but owing to various circumstances the meeting doesn’t take place because Jess becomes spoked and is on the run.  Eventually Jess agrees to meet Ale at Coogee beach.  They no sooner meet than six cops swoop on them.  Despite their numbers, Jess manages to escape their clutches only to run in front of a car and is killed.  Someone in Alex’s office has betrayed her.  But who is it?  Could it be the cynical professional political staffer Johnathon Cosgrove, who has been promised the job as Chief of Staff to the new Home Affairs Minister once he has finished keeping Alex on the straight and narrow?  Possibly, but my money’s on Jillian Morell, Alex’s social media strategist.  At the time of writing, we will have to wait to find out.

PM (ending phone call):  Sorry I had to kick some heads in Adelaide.  They still think not having convicts makes them special.  (Que?)

Are you f***ing anyone at the moment? Don’t be shocked.  Some Neanderthal will find out and throw it in your face if you are.  Don’t f*** the wrong people.

Here’s another extract.  The PM and her chief of staff discussing Alex:

CoS:  Do you think she’ll be intimidated?

PM: Of course she’ll be intimidated.  She’s the only black woman in a Parliament founded by white men.  (She stops to look at a painting of the arrival of the First Fleet) Do you know a few weeks after the arrival of the fleet, the 800 or so male convict and sailors waited for the women to disembark.  Their screams were said to have been heard till dawn. When I go into the Party room, I think of them.  That night made whores of us all and we’re still trying to get some f***ing respect.

That incident might have been news to Governor Phillip, Captain Hunter and Lt Watkin Tench of the Royal Marines.  Still, no doubt the producers of Total Control  felt the need for a nod to the #MeToo movement.

So far the Labor Party has had only a cameo appearance in the person of Opposition Leader Laurie Martin, played in  avuncularly sinister style by William McInnes.  Their time may come, but I won’t hold my breath.

The general tenor of the show would alienate most sensible mainstream viewers but I don’t believe they are the target audience.  Sure, the producers may hope to suck in a few useful idiots from the white ABC audience but I believe the real target audience is Aboriginal Australians.  It gives them the chance to revel on a grand scale in the cherished status of victimhood.

The high point of the series so far came when Julia, sorry Rachel, treats us to a very explicit nude scene. It adds no dramatic content to the plot – it is simply a case of Rachel getting dressed.  It is startling in its irrelevance and could have been included for no other reason than titillation (no pun intended). Could it be that Rachel just wanted to show off how well her 50-year-old body is holding up?

Given that most, if not all, the episodes I have described would have been in the can some time ago, long before  Aboriginal activist Nayukah Gorrie, on the now-pulled Q&A episode Broadside, said  ‘Let’s burn stuff’, it might not have been just a throwaway line. Readers will no doubt recall another Aboriginal activist, Tarneen Onus Williams, on Australia Day 2018, expressing her sentiments thus:  ‘F*** Australia, I hope it burns to the ground.’  There is something of a theme developing here. How long, I wonder, before the wish becomes father to the act?

You might argue that Total Control is just a story, based on themes that do exist in the real world and why shouldn’t Aborigines be portrayed as victims in their own story?  There is some justification in that.   But it is the relentless nature of the vilification of the white establishment that turns Total Control into propaganda.  It is hard to imagine an Aboriginal person watching this series and blithely accepting it as ‘just a story’.

When I first started reviewing Dark Emu I was looking at it from the perspective of the effect it would have on white readers – principally to lay upon them a serious burden of guilt.  I was astounded, as recently as October 2019, to hear former Liberal MHR Fiona Scott claim on The Bolt Report, that we need to amend the Constitution to remove the provision that treats Aborigines as chattels of the landowner upon whose land they reside.  When challenged on this, she backpedalled somewhat but asserted that under the Constitution, Aborigines were considered part of the flora and fauna of Australia.  God help us! As mentioned. Ms Scott is a former member of parliament. There are things some things for which we are entitled to give thanks.

I later realised that Dark Emu also has its indigenous readers and the impressions it will live leave them with is even more sinister – a misguided pride in a false history and, as a result, the further entrenchment of a sense of grievance that ignores and devalues the positives of being part of a modern Western nation which the majority now enjoys.

In its subtle and slickly packaged way, Total Control will be much more effective and, dare I say it, incendiary than Dark Emu.  The ABC has a lot to answer for.

The Left Versus Reality