The Useful and Much Abused Tony Abbott 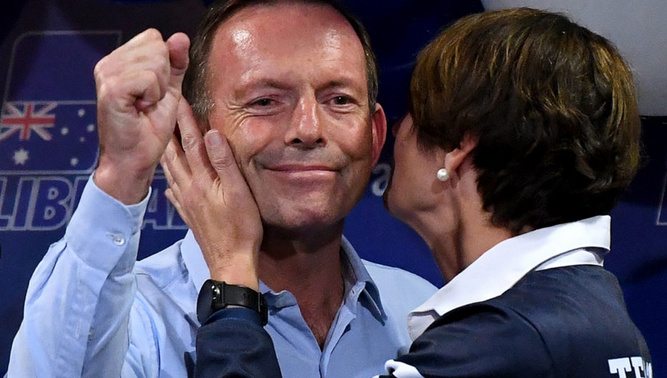 Tony Abbott’s colleagues ignominiously ended his prime ministership after just two years and his constituents humiliatingly ejected him from parliament with a 20 per cent swing. So why did the Liberal Party honour his contribution to public life with a testimonial dinner even bigger than John Howard’s? Perhaps it’s because a politician who’s never lost is one who’s never really tried to make a difference.

Starting from his days as a conservative student activist in the 1970s, Abbott has been one of those astonishingly rare people in public life for whom holding office has been much less important than standing up for beliefs and actually getting things done. He became president of the Sydney University Students’ Representative Council to end compulsory political levies and to break up the leftist Australian Union of Students. He first came to wider attention campaigning against the republic that just about every media outlet in the country thought was both inevitable and desirable.

Two things were remarkable about his record as a Howard government minister: his unique and unwavering loyalty to the then-prime minister (because he always thought that the government without Howard would be weaker than the one with him) and his unshakeable determination in every portfolio he held to work out what would be practical change-for-the-better, to put that on the public record, and to work indefatigably to make it happen. As employment minister, he made everyone who’d been on unemployment benefits for more than six months do work for the dole. As workplace relations minister he began the process of putting a tough industrial cop-on-the-beat to rein-in the most militant union in the country. As health minister, he was an unshakeable advocate of fee-for-service as the best guarantee of good treatment while bringing in bulk-billing incentives and the extended Medicare safety net to keep health care affordable.

As opposition leader he instinctively understood that it wasn’t enough to agree with every critic of the government. Instead, he rose to the challenge of identifying the government’s main failings and offering a feasible alternative based on values and instincts that appealed to a majority of voters. By staying relentlessly focussed and personally disciplined, he destroyed the majority of a first-term government and subsequently joined just Sir Robert Menzies, Malcolm Fraser and John Howard in leading the Liberal Party from opposition into government in Canberra.

In government, he was as good as his word: stopping the illegal immigrant boats within three months that even Howard had thought was impossible; scrapping the carbon and mining taxes; triggering the biggest infrastructure boom in the country’s history; and beginning the task of budget repair that, despite Senate sabotage, is now finally producing the surpluses required for prudent and responsible government. Australia remains the only country in the world to have dealt successfully with people smuggling and that is Abbott’s historic achievement.

Unlike Howard, who came into government with his internal rival, Andrew Peacock, retired from parliament, Abbott had Malcolm Turnbull in his cabinet. Turnbull assiduously cultivated colleagues’ resentments and pandered to the politically correct media to snatch the top job in a party room coup. He exploited three factors: Abbott’s correct-but-enmity-creating decisions to ban MPs from employing family members and to stop first class ministerial travel; a tactical retreat on removing the “offend and insult” restrictions on free speech that had upset free-speech conservatives, plus the reintroduction of knighthoods that had upset progressives; and elements of Abbott’s character that he persisted with as PM, like the annual Pollie Pedal bike ride, camping out in remote indigenous communities, fire-fighting, and wearing speedos while on surf patrol that would have been praised in any other politician but allowed inveterate critics to portray him as quirky.

Still, as proved by events, Abbott was vastly Turnbull’s superior as a political campaigner, policy implementer and even party manager. It was invariably Abbott’s views that generated opposition, not personal failings such as arrogance, laziness or incompetence. Turnbull’s self-proclaimed main accomplishment as PM, the legal recognition of same-sex marriage, was achieved through the plebiscite that Abbott had devised and Turnbull condemned.

For someone so obviously still committed to public life, it was natural for Abbott to stay in parliament after being dumped to the backbench. One of Turnbull’s biggest mistakes was failing to utilise his ability in the cabinet on the improbable grounds that Abbott would be equally disloyal. Without backbencher Abbott’s quite legitimate critique of Turnbull’s Labor-lite energy policy there would have been no change of leadership and, consequently, much less of the policy difference that made Labor unelectable.

It was petty of Scott Morrison not to restore Abbott to cabinet, especially after the incumbent ministers for defence and indigenous affairs – portfolios that would have been natural fits for him – had announced their retirements. Leaving Abbott on the backbench was an unmistakeable signal to the electorate that Morrison, too, thought his time was up. Despite this, Abbott did Morrison and the Liberal Party further service by drawing so much union and GetUp fire that, while Warringah was lost, the election was won.

While former CEOs become company chairmen, former departmental secretaries become university chancellors, and former generals become governors, Australia doesn’t really know what to do with former heads of government who are too young, opinionated, and energetic just to retire. It would be a pity if someone as capable and relatively youthful as Abbott did no more than make the occasional speech and volunteer in the fire brigade.

By the standards of Australian politicians, Abbott thought deeply and spoke clearly. He almost never fell into the editorial-writer’s trap of talking in woolly generalisation and vague aspiration. People often disagreed with him but were rarely in any doubt about what he thought and where he stood. Far more than most in public life, he said what he meant and did what he said. His political judgment could be questioned but, on his record, no one could seriously doubt his ability to size-up situations, make decisions, and see them through.

He didn’t have long enough to be a great prime minister but his time at the top can stand comparison with Howard’s first two years. However the current government finally turns out, it will owe a massive debt to the person who first put it there.

Emeritus Professor of History and Politics at Griffith University, Ross Fitzgerald is the author of 41 books, most recently the sexual/political satire The Dizzying Heights, co-authored with Ian McFadyen and published by Hybrid in Melbourne

4 thoughts on “The Useful and Much Abused Tony Abbott”