The Flag of Hong Kong 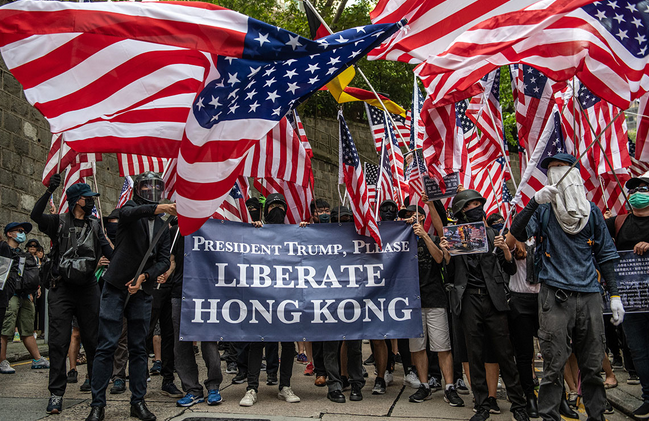 Given the political climate, any expression of patriotism—even of the softer varieties—is given the same weight of judgment as was once reserved for bigotry and prejudice. But we had it once. We did have the flag-waving, and the expressions of pride in ones culture, among other things.

I, for example, don’t mind if a quiet but confident culture chooses to forego the outward expressions of passion and belief that come with some of the more dignified forms of patriotism. What I don’t like, however, is what we currently have. What does a society that was once proud of itself look like? A person living in Britain (or most other Western countries) decades ago might’ve struggled to picture such a world. For us it is much easier. We are living it.

As Christopher Hitchens once remarked, ‘There’s nothing more dispiriting than a drooping and neglected flag and nothing more lame than the sudden realization that the number of them so proudly flourished has somehow diminished.’ It is not about the physical act of owning a flag and waving it about, it is what the flag signifies. In Britain,  for those who don’t hate it, it is one of the ways of displaying an appreciation for a country that did more than any other to propel democracy into the furthest parts of the globe.

In Australia, it is a representation of a country that is great in one simple way. People think of Australia as a country without culture and in some sense a new country. It isn’t. Australia has been relatively stable for more than a hundred years. Can many other countries boast this? And in the United States, the flag-waving is much more felt. People there (except those on the Left who wish to undermine the American project) are very aware of the freedoms they possess that very many other supposed ‘free’ societies do not: the chief one being an absolute freedom to say and think what one wishes.

I only regret the lack of flag-waving because with it comes other things. What we actually need is a brave, confident, and stoic commitment to defending and upholding our way of life. The banners and parades and such are just a by-product.

But we have lost, as the British say, our piss and vinegar. To look the world over (though there is more than one example), is to see that our patriotism has been outsourced. I could also genuinely do without flag-waving, if the people not waving the flags believe what the flags are meant to represent. But so far as polite society, academia, and many other bloated demographics are concerned, they and we don’t.

Just like George Orwell’s famous observation, that it takes an intellectual to say something very stupid, it takes free people (such as us in the West) to denigrate our freedom and argue for circumstances that would bring about its end.

In Hong Kong, as you will have noticed, events belong on the far end of a scale that was already worrying. The fighting is constant and the airport has been locked down. One instance of the nonsense is when a police officer, who had begun to beat a protester, was cornered and had his baton taken, then drew his gun and took aim at all the surrounding people to disperse them. What might’ve happened if they didn’t? Well history removes any need for speculation. Another disturbing outcome is that footage has emerged of military vehicles making their way from mainland China into Hong Kong.

These, as well as many other things, have been the negatives of this disgusting display of neglect on the part of the rest of the world. But there was a positive, if you take the deeper meaning as to why such a thing was happening. Some protesters in Hong Kong were wielding American flags and singing the national anthem, which is something many Americans don’t feel like doing. But why were these protesters doing it?

These people in Hong Kong are in their own way revolutionary. Because what is more revolutionary that the idea of a free self-governing republic that respects individual liberty? The American Revolution is one of the only ones that has lasted and maintained what the original goal was. It is also, for much the same reason, the only one that has a chance of being emulated the world over. It is universal, and the principles behind it would improve any society that adopted them.

Every day, we have to hear about revolution this or revolution that. Where is the Russian Revolution? What about the Chinese or the Cuban? They all failed and societies pay for them to this day. The American Revolution is the one that was founded on individual rights over that of the collective and, rather surprisingly, that is the reason it persists for groups such as those people fighting for their own liberty in Hong Kong.

Hummus, Hamas and the hopeless naïve

Robbed of Reputation and Achievement