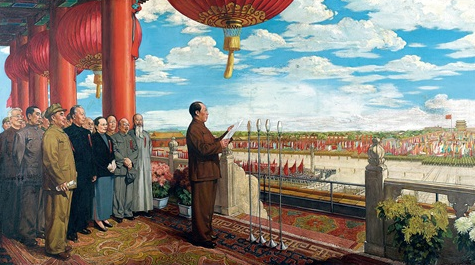 Seventy years ago this October, a man with a strange Hunan accent and little concern for fashion or dental hygiene stood among his comrades in Tiananmen Square, before the Forbidden City, and proclaimed China’s new “people’s government”. Mao is oft quoted as announcing “the Chinese people have stood up”, yet several who were there did not hear him say it. He did read out a long laundry list of his comrades, as there were many he had to thank who had been with him on the Long March, helped fight the Japanese, then chased the rival Nationalists to Taiwan. Elsewhere Mao is quoted, more pertinently in light of subsequent history,  as saying “Communism is not love. Communism is the hammer we use to crush the enemy.”

The people of Hong Kong are now waiting to see whether, seven decades on, Mao’s hammer will fall on them.

Turning seventy is very important to the People’s Republic of China. (The country’s name itself is a strange tautology, as a republic is a thing of the people.). Old age has always been venerated in China, yet any government lasting this long must be a miracle. To the north, across the Amur River, Communism’s flagship, the Union of the Soviet Socialist Republics, was proclaimed in 1922 but only made it until late 1991, just short of sixty-nine — a life expectancy consistent with vodka and cheap cigarettes. There are now nervous Party members in China worried that their seven decade, sweet-and-sour experiment with Communism might come to a similar end — and soon.

That is where the timing, location, substance and scale of the current Hong Kong protests all start to look crucial. It is also why Chinese officials are now heating up their rhetoric as they assemble army and police units on the other side of the border in Shenzhen. (The Chinese tend not to keep many of the PLA military in Hong Kong, in part because the pay of a PLA soldier is scarcely enough to live, and in Hong Kong that would be obvious.)

Hong Kong was handed back to China by a sweaty Prince Charles in 1997, with a casual fifty-year timeline, to 2047, agreed upon before this “special administrative region” could be fully merged into the mainland. For 28 more years, it has been “one country, two systems”. Yet, various impatient officials on the mainland have let slip that the re-merger could well take place sooner.

The first generation of Hong Kong students is emerging now who (a) don’t remember Hong Kong as a colony, but (b) — if the 2047 merger timeline is adhered to — will still be busy trying to earn a living and raise the next generation in the re-merged Hong Kong of 2048. Prior to now, it has been somewhat academic for older Hong Kong residents what might happen after 2047. The current elderly and those in senior positions at work will be dead. Many of the middle-aged will have their Plan-B in place — citizenship in Canada, the US, Australia or elsewhere arranged, and foreign investments to rely on. (Disgruntled Chinese are the gift that keeps giving to the Australian property market.)

Yet, the younger generation of emerging Hong Kongers do not have these luxuries and assurances. They are renting or just getting their foot in the door of Hong Kong’s astronomic property market. They are usually committed in their careers to working with, if not in or for, China. It is much harder now for them to build a possible parallel option overseas. So this generation of Hong Kong’s young care very much indeed what happens in 2047 or sooner.

Second — and more importantly — this new generation of Hong Kong residents is now being crowded out of their own city by mainlanders, many of whom are rich and here to stay. The new direct train service from Guangzhou, the bridge/tunnel road to Macau, and the opening up of many new cross-border flights have meant mainland Chinese tourist visits to Hong Kong soared past 51 million in 2018, a growth rate of 15 per cent per annum.

Quietly, mainland-based property and commercial investors have taken the lion’s share of Hong Kong markets. Hong Kong is no longer a seriously big investor in greatly-enlarged China, now focused financially on Shanghai. Rather, China is now a massive investor in Hong Kong. As the saying goes, he who has the gold makes the rules.

What we are witnessing is a new generation of local, educated adults who fear they might not be able to afford to stay in their own city if the stampede of mainlanders continues. Hong Kong’s handover to mainlanders will then in every sense be complete. People who once were “island” Hong Kongers will slip down the social scale, first into the dormitory suburbs of Kowloon and the New Territories, and then be forced to slink across the border into the anonymous sprawling shroud of Shenzhen.

Hong Kong has always been about location, location and location no matter if you are trading tea or opium, seeking a new life in the free-market/capitalist West, filming Oscar-winning Love is a Many Splendoured Thing, or seeking hilltop respite from the clothes-drenching humidity of the Pearl River or baking summer furnaces of Guangdong.

Despite the key significance of the timing and location of Hong Kong’s current protests, most of the column inches in newspapers and head-to-camera current affairs reports dwell on the protests’ apparent substance and immediate trigger, the infamous Extradition Bill. To be fair to Hong Kong Chief Executive Carrie Lam and her team of bureaucrats, the law was apparently designed to stop petty criminals escaping justice on the mainland. But, to be equally fair to the protesters, the same law could readily be used to whisk any troublesome Hong Kong resident to China and whatever charges seem appropriate to the Party.

You don’t have to say 99.93 per cent conviction rate (or “involuntary organ donor”) to understand why Hong Kong people fear being locked up in China. Even President Xi — whose father, Xi Zhongxun (despite his history as Mao’s propaganda chief) was imprisoned from 1968 to 1972 — understands how capricious Chinese justice can be.

But the Extradition Bill is only a figleaf, that covers the embarrassing substance of the protests. This was exposed dramatically by a Reuters reporter, James Pomfret, asking Carrie Lam three times whether or not she had autonomy from China. Three times, as in the clip above, Ms Lam refused to respond. Yet, all three times her real answer was abundantly clear.

Hong Kong has no real autonomy, and there are no plans for this to change, not ever. Carrie Lam knows it. And that is why the protestors are out in the streets, night after day, week after week, in the blazing sun and in the monsoon. Even for people used to tropical weather, that sort of protest takes great devotion. Umbrellas were once symbols of the insurance industry. Now, memorably, starkly and indelibly, umbrellas have become enduring symbols of the “free” people of Hong Kong. The true substance of their protest is about autonomy, the right to self-determination, a fully elected (as opposed to now much-appointed) government. And, above all, protection from Beijing. 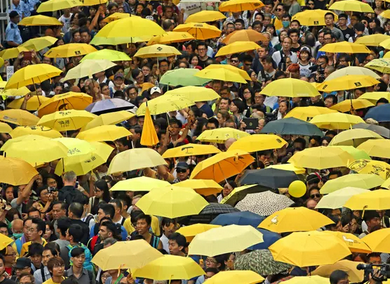 Taken in total, Hong Kong’s restiveness is something Beijing can never tolerate, not as it tries to hold together 1.4 billion people from fifty different sub-nationalities while also hoping to re-merge the Taiwan. This is where the final aspect of the Hong Kong protests – their unprecedented and overwhelming scale — matters enormously. Scale is what China is all about.

With Hong Kong’s almost eight million residents, crowded sidewalks and overhead walkways, and cramped public spaces, 100,000 in the streets is a big and noisy crowd. A protest of one million, which one of the rallies easily exceeded, has been inconceivable until now. Riot police, with armoured vehicles, water cannon, tear gas, rubber bullets, and hundreds of vans to take away the arrested, can perhaps control a crowd of 100,000. But the massive throngs the world has been seeing are another matter entirely: you can’t arrest them all and the option of bringing in those assembling troops on the other side of the border carries the certain risk of a major loss of life.

After 1989 in Tiananmen Square, China surely can’t get away with such loss of life again. That internet thingy is too damn good at showing things to the wider world. And, even with Google and Facebook hobbled, there are ways around such cyber blockades. (For example, mainlanders were sending clips of what they had seen in Hong Kong, marked “picnic”.)

China’s real risk is not insurrection in Hong Kong, not a troubling Taiwan, not even attack by the “evil” America (with capable military units not far away in South Korea and Japan, and soon to be back in the Philippines). Its real risk is that its own people may decide (as did East Germans in 1989) that they don’t want to play the game of Communism anymore, they want freedom and autonomy too.

In 1987 the Communists allowed Bernardo Bertolucci and his film crew into the Forbidden City to film the much-honoured  Last Emperor , the Communist hierarchy believing it would send a message about China’s future to the West through cinema.

But in 2019, as the 70th anniversary of Mao’s declaration of the People’s Republic of China draws near, will the next film crew to arrive in Beijing be there instead to film ‘The Last Communist’?

4 thoughts on “Your Move, President Xi”