A Treat for Warbirders: Hurricane vs Me 109

In my 2012 Quadrant essay Hermann Goering and the burning of the Bialowieza[1]  I made a comment that at the start of the war the Luftwaffe’s Messerschmitt 109 fighter was about on a par with the RAF’s Spitfire, but superior to the Hurricane. This was true in relation to the Mark I Hurricanes which came up against the Me 109 in France in 1939 and in the early battles over England in 1940. But the situation changed after about May 1940 when Hurricanes were fitted with constant speed propellers that greatly enhanced their performance, and then with armour that provided much-needed protection for the pilot.

Nevertheless, the idea that the Hurricane was not a match for the Me 109 has peristed. I have therefore been interested to read a report into the actual fighter capability of the two aircraft when matched under appropriate conditions.

The trial of a Hurricane versus an Me 109 was conducted in May 1940 by the RAF and the results are contained in a report[2] now available on the internet. Both aircraft were flown by experienced fighter pilots. The trial comprised three comparisons: (a) take-off performance, and rate of climb to 15,000 feet[3]; (b) dogfighting; and (c) line-astern formation flying.

In the first test, the two aircraft took off together and climbed straight to 15,000 feet. The performance of the Me 109 in this test was significantly better than that of the Hurricane, despite the fact that the Hurricane was fitted with a constant speed airscrew and flown at full throttle and full revs.

At 15,000 feet the aircraft separated and approached one-another head-on and commenced the dogfight. The Hurricane pilot did a stall turn followed by a quick vertical turn, enabling him to lock onto the 109’s tail. The pilot of the 109 was unable to prevent this manoeuvre succeeding. From that point the Hurricane pilot had no difficulty remaining on the tail of the Me 109. The pilot of the 109 tried all possible manoeuvres and finally the one most usually employed by German pilots, namely a half-roll and vertical dive. The Hurricane followed this manoeuvre, but the 109 drew away at the commencement of the dive, being the faster machine. 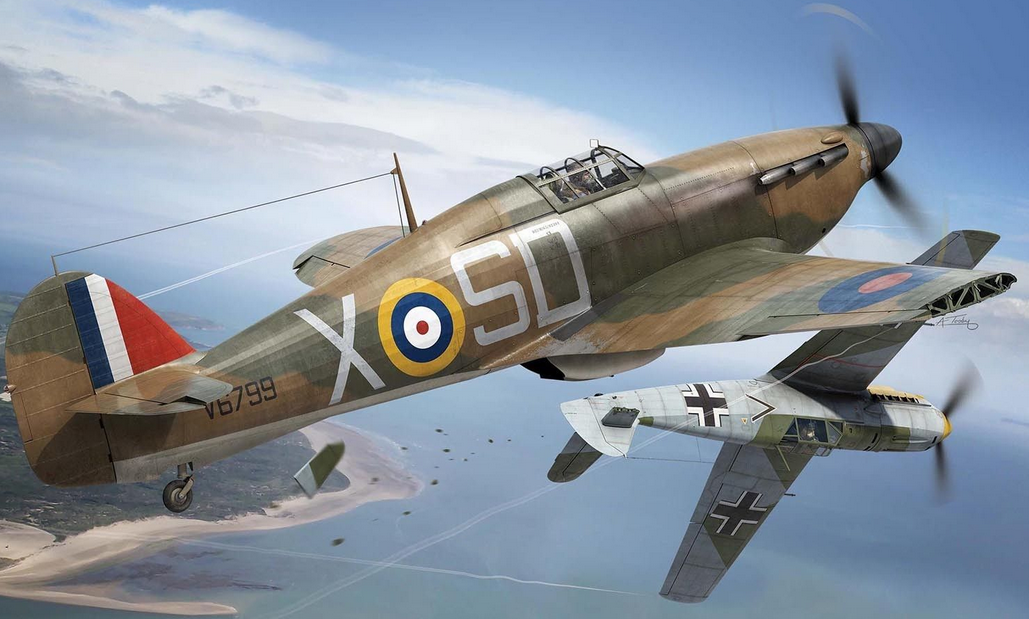 In this artist’s rendering, an ME 109 rolls and dives away from a damaged Hurricane.

The 109 pilot reported that he “felt that had he continued this dive he might have got away”. However, in the pull-out he found that it was all that he could do to pull the machine out of the dive at all, as fore and aft his aircraft had become very heavy. In fact, the pilot was of the opinion that “had he not used the tail adjusting gear, which itself was extremely heavy, he would not have got out of the dive at all”.

…largely due to the rather vertical position in which the pilot sits. It is very noticeable that in the 109 the position of the pilot is reclining, with his legs well up in front of him. It has also been noticed that German pilots do pull their aircraft out of dives at very high speeds, and as I think the position in which the pilot sits is the main reason that black-out is avoided, I feel that this is a point which should be duly considered when in the future a fighter is designed to meet other fighters.

Another point of interest emerged during these tests: the 109, owing to its better under-camouflage, was very much more difficult to spot from below than the Hurricane. This difference gives the 109 a definite tactical advantage, namely, as the pilot of the Hurricane reported

when they are below us they can spot us at long distances, while when we are below them [they are difficult to see]. As in all combat the moment initial surprise is the ideal at which we aim. I strongly recommend that the underside of Hurricanes should be painted a duck-egg blue, the roundels remaining the same, as it is the contrast between black and white only which is so noticeable from below.

The Squadron Leader commanding 67 Wing RAF, who organised the test and prepared the report, came to two main conclusions which he then forwarded to the brass at Fighter Command:

The Me 109 is faster than the Hurricane by some 30 to 40 miles an hour on the straight and level. It can out-climb and initially out-dive the Hurricane. On the other hand it has not the manoeuvrability of the Hurricane, which can turn inside the Me 109 without difficulty.

The Squadron Leader then observed:

After this clear-cut demonstration of superior manoeuvrability there is no doubt in my mind that provided Hurricanes are not surprised by 109s and that the odds are not more than two to one, and that pilots use their heads, the balance will always be in favour of our aircraft, once the 109s have committed themselves to combat.

Judging from the tactics at present [in May 1940] being employed by the 109s, namely sitting above us and only coming down when they can surprise a straggler, and then only completing one dive attack and climbing away, I am fairly certain that the conclusion of the German pilots is the same as our own, and I cannot help feeling that until all Hurricane aircraft have Constant Speed airscrews to enable them to get up to the height at present adopted by the 109s we shall have few further chances of combat with this particular type of German aircraft.

In the wake of the Battle of Britain (in which the Hurricane was responsible for 60 per cent of all German aircraft shot down) things moved on. Hurricanes used in the Western Desert were not capable of matching it with the by-then substantially upgraded Me 109s, and subsequently they became more of a fighter-bomber, used in ground support. By 1945 the Spitfire was regarded as the superior fighter to the 109, especially at heights over 20,000 feet.

Peter Vacher’s book on Hurricane R4118 (in which he describes finding an old Hurricane in bits in India and its painstaking full restoration), contains a nice dedication to the Hurricane fighter from retired Wing Commander “Bunny” Current:

I flew [Hurricanes] almost daily for just short of three years, from December 1938 to August 1941, when I took command of a Spitfire squadron in Hampshire. The Hurricane was a magnificent war-horse, with its unsurpassed gun platform in the leading edge of the wings, which had a deadly promise. It had no vices whatsoever, with superb reliability, and was so easy to fly in all weather conditions.

Totally trustworthy in all respects, it was a confidence-giving aeroplane, loved by all who flew it.

I confess to having always regarded the Spitfire as the most beautiful of all aircraft – an impression gained mostly from photographs, although I did see one once, screaming low overhead one ANZAC day just after the war. It did a slow roll, and I can still remember the throat-gripping roar of the mighty Merlin engine.

On the other hand, I have always also loved the Hurricane, the “war-horse” of the Battle of Britain. It is somehow a more muscular aeroplane than the Spitfire, not so much the graceful (but deadly) matador as the pugnacious prize fighter. But it still has beautiful lines, a classic World War II fighter.

Incidentally, there is a charming story in Vacher’s book about his discovery and restoration of Hurricane R4118.

John Fasal and I were on our travels from Calcutta to Delhi in March 1982. John, an intrepid researcher into the fate of older Rolls-Royce and Bentley motor cars, was continuing to find material for his book Rolls-Royce and Bentley in Princely India. For me it was a privilege to travel with him, meeting the princely families who owned the cars in the nineteen tens, twenties and thirties. In the palace garages still lurked such fine, forgotten cars. For myself, a vintage car enthusiast, these vehicles represented the epitome of engineering excellence and of the coachbuilders’ art. The fact that many of the cars were covered in layers of grime and sat on rotting tyres only added to their romanticism. Here were the untouched relics of a bygone era, an era of pomp and circumstance, of splendour and majesty.

For the most part, the palaces we visited mirrored the condition of the cars. The chandeliers still hung, but the cobwebs obscured their sparkling beauty. In the libraries, the illiterate termites devoured volume after volume.

The two enthusiasts find themselves on the campus of the Banara Hindu University where there is a famous engineering department. John had been there before many years before and remembered there were two wonderful old Rolls-Royces stored in one of the outbuildings, and these were eventually tracked down. Vacher recalls:

To say that I was stunned when the doors opened would be an understatement. Sitting proudly in the middle of the engineering workshop there lay a 1924 Rolls-Royce Silver Ghost, formerly belonging to His Highness the Maharaja of Jodhpur. A polished all-aluminium tourer with coachwork by Barker & Company, it was the most beautiful car I had ever set eyes on. Behind the long bonnet, a V windscreen protected an interior in which everything was exactly as it had been in 1924. Alongside stood an equally fine Rolls-Royce Phantom I of 1928, bodied by Hooper & Company.

After the sheer excitement of finding such exceptional cars, I was ready for a little light relief. Coming out of the workshop, we saw in an adjacent compound the remains of two aeroplanes. With a bit of clowning around, we took it in turns to sit in the cockpit of one of them and take a photograph. We knew little about aircraft then, but we did recognise one as a British fighter and we could see through the cowling that it was powered by a Rolls-Royce Merlin engine. There were no wings and no covering to the fuselage – just a network of tubes.

Must be a Spitfire, we said to each other. When I got home I put the photo in my album (see below). 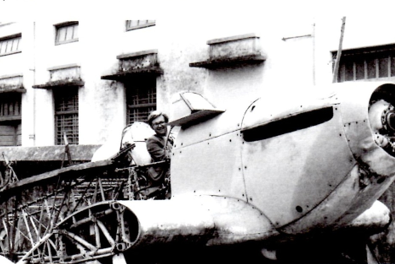 The remains turned out to be Hurricane R4118, sent to a pilot training school in India in 1943 after it had been superseded as a fighter with the RAF in Britain. Vacher acquired it, shipped it back to England and arranged for its complete restoration. It took to the air in December 2003 (as pictured below), once more a thing of beauty — and no doubt more than a match for any passing Me 109. 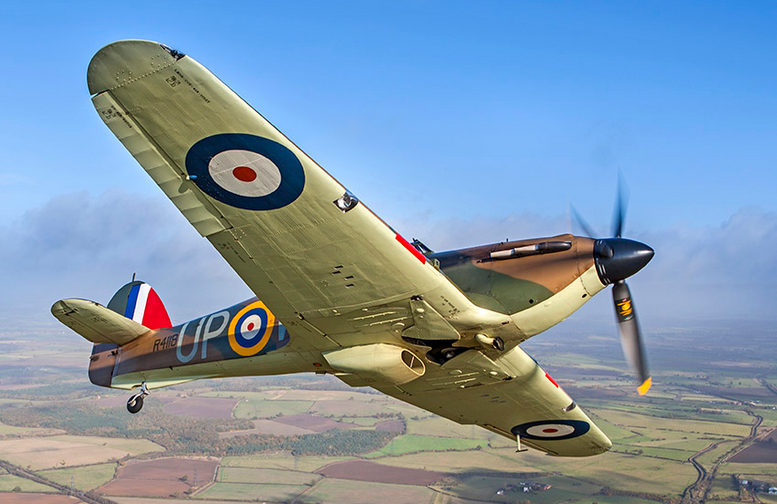 3 thoughts on “A Treat for Warbirders: Hurricane vs Me 109”

The Truth in Black and White

Why I can’t vote Labor

Blame it all on Lawrence