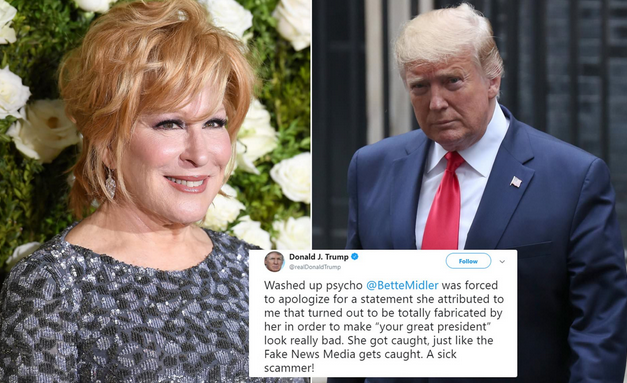 Apparently rape limericks are ‘a thing’ now, if Bette Midler’s social media feed is anything to go by. On July 12, the singer, actress and textbook example of Tinseltown’s Trump Derangement Syndrome (TDS) penned a dirty little ditty for her 1.7 million Twitter followers:

Writing limericks about children being raped is okay if you’re a leftie? But if a conservative were to pen such a tweet, social media types would hit the outrage button with a public lynching of the guilty party’s public reputation to follow. There would be requests by the Left for Twitter founder Jack Dorsey to ban the celebrity’s account.  There would be demands for a full-grovel public apology. There would be leftoids by the thousands retweeting the limerick with the condemnatory hashtag #metoo.

I don’t have an issue with tasteless limericks.  Midler has a right to say what she wants without censorship. My criticism isn’t of The Divine Miss M but of left-wingers’ hypocrisy when it comes to the wrongdoings of their own. Midler mentions Trump in her limerick and ties him to convicted paedophile Jeffrey Epstein while pointedly overlooking her good mate Bill Clinton.  Why is that? Well, while Trump’s ties to Epstein appear no tighter than having been photographed with him at a couple of celebrity galas, the priapic former president has been widely reported to have frolicked with the island’s procured harem of underage girls. The flight records for Epstein’s private jet established that he enjoyed at least 26 flights aboard what was known as the Lolita Express. He has denied the charge, despite witnesses, but who can take seriously any Clinton disavowal of his well-known amorous appetites?

Midler’s not the only one protecting Clinton.  Jeffrey Epstein’s Wikipedia page was conveniently scrubbed of references to the former president on July 10. Since then the editing has been non-stop, with references to Clinton constantly stripped, restored, revised and re-inserted. It seems the Left are happy to cover tirelessly for their own — no matter what filth exists behind their heroes’ shiny veneers.

We saw something similar in the lead-up to Australia’s May 18 election with those better-not-go-there rape allegations against Bill Shorten. In the wake of #metoo, accusations against high-profile men were automatically deemed to be the truth by many, who dispensed with the need for confirmed fact and evidential proof. Following Brett Kavanaugh’s ordeal at and before his confirmation hearings, outraged fembots swore blind that his ascension to the US Supreme Court was an example of a “system rigged against women.”  Meanwhile, Kavanaugh’s accuser, Christine Blasey-Ford, became a martyr to many, not to mention and a good deal richer from all her well-wishers’ donations.

Or consider poor Geoffrey Rush, who was widely villified before winning his defamation lawsuit. Clementine Ford condemned “GeoffreyF**kfaceRush” (her words, not mine) for his alleged actions. She also stated, predictably, that she “stood with” his accuser,  Eryn-Jean Norvill. But, funnily enough, there were no posts nor tweets by Ford stating that she Kathy Sherriff, who accused Bill Shorten of raping her in a toilet block at a Young Labor camp.  There were no #Ibelieveher hashtags in support of Sherriff by anyone on the Left. Despite Peter Faris QC taking up her case in the days immediately before the election, the mainstream media let that story die on the spike. Contrast that coverage, or lack of it, with the attention given to Barnaby Joyce’s marital misadventures.

But back to Bette and her hammering and clamouring.  She has penned many more limericks and tweets since her July 12 gag about raping young girls, including the charge that any black American attending a Trump rally must have been paid to be there. Oh, and she still believes Trump is Putin’s puppet and that Melania Trump needs a better plastic surgeon. It seems her extreme case of TDS is no mere mental malady but a new vocation.  I wait with baited breath for her next exercise in blinkered hypocrisy. It should be going public any second now …

Bonfire of the racial vanities