The Four Horsewomen of the American Apocalypse 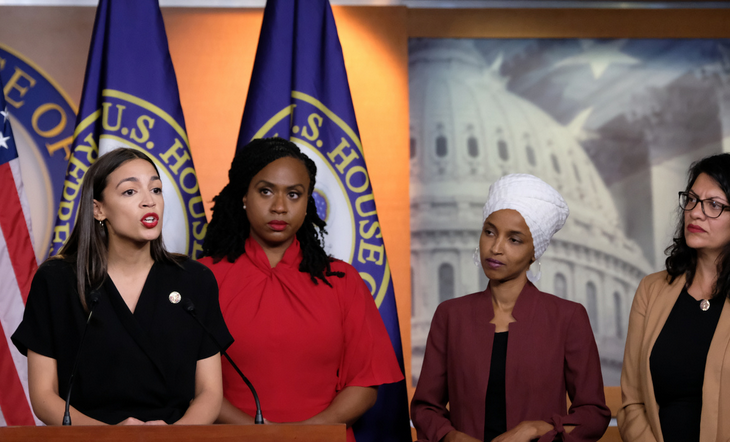 President Trump is in trouble. Ho hum. For a tweet. Ho hum. About women. Ho hum. He’s been called out as racist. Ho hum. Many Republicans won’t support him. Ho ho!

The women in question of course are four “newbies” (or new Queen Bees) in the hive that is the US Congress. Trouble is, they’re already in trouble. But not with Trump. No, with Nancy Pelosi, the ageing, wealthy, San-Francisco-based doyenne of the Democrats. And she, well, she is the Queen Bee Mother.

Nancy Pelosi is sharp. No one survives in Democrat politics for two generations without being whip smart. You gotta know when to slide into third base with the progressives in your party, and when to stay cautiously on second, hoping that the new batter is about to hit the issue of the day outta the park.

Nancy knows her party has not only swung left recently, it has swung low. Character assassination is now the Democrats’ chosen weapon. Justice Kavanaugh only made it through to the Supreme Court because Christine Blasey Ford’s claimed witness didn’t know a thing about the assault she alleged.

Almost everyone who is male, white, religious (except for one religion), able to earn their own living, and committed to free enterprise, national borders, international peace-keeping and innocent-until-proven-guilty justice is suspect, if not evil.

So, what happened? Well, the Democrats (a seemingly irresistible force) finally came up against an immovable object (Donald J. Trump). In the “play the man/woman” department, The Donald gives as good as he gets and better (or worse, depending on your point of view.). Donald used to be a Democrat, and sometimes it shows. Thus, when Donald put his hand up for president in 2016, and both Dems and Republicans just blew his candidacy away, Donald blew right back at them. He’s still blowing.

This is where those four, relatively young women “of color” come in. The 2018 midterm elections saw all four take up seats in the US Congress. And, what’dy’all know? They didn’t take no, from Mother Hen Pelosi. They started going for Donald’s jugular.

According to them, everything was wrong with America. It is a doomed society — only perhaps salvageable by mass unauthorised immigration from Mexico, Central America and parts further south and payment of perhaps a cool trillion dollars in reparations to anybody who had one or more ancestors who may have been slaves.

Fossil fuel use — including for electricity generation, car, truck and plane travel — should be shut down. Very soon. All education, all healthcare, and all provisions for people who crossed the US border should be free. America’s corporations, and its hardworking citizens, should pay for all this by punitive taxes. Only then can all men, women and persons be free.

Meantime, white males should step back from any role they had in running society. They should take to cabins in the woods, and reflect on how they had brought America from its British colonialist roots within 250 years almost to the brink of the abyss. Only these four youngish women of color can save America. God certainly can’t (unless He was that one God of that religion which shall not be mentioned).

Except many Americans (including Nancy Pelosi) seem to understand that what these rising women in her own Party are offering isn’t salvation, it is an apocalypse.

The Green New Deal would shut down American industry and exports. Unemployment — at six-decade lows under Trump — would skyrocket. Open borders would likely see another ten million poor immigrants within a year. China, Russia, Iran, Syria and North Korea would all take the opportunity of an America-on-its-knees to expand, crush or overtake neighbours, and perhaps set off a nuclear war.

In the meantime, the urban violence and homelessness that blights many formerly shining cities of America would likely worsen. Heavily-armed gangs would soon take over most of Chicago, Detroit, Philly, St Louis, Memphis, New Orleans, Oakland, and much of DC, LA and New York. The lights would go out in many cities, and they might not come back on.

These four women, with their foolish aspirations for a new America, built on victim-identity politics, deliberate dismantling of the free-enterprise economy, and kow-towing to violent, repressive dictators, autocrats and theocracies overseas, are truly the Four Horsewomen of the American Apocalypse.

If polls are to be believed (this time), these four might see off Trump at the 2020 Presidential Election. (He can’t, the polls say, hold crucial swing states this time.). Instead — again if the polls are right — there will likely be a far-left-leaning Democrat president. And she (or perhaps he) will only ask, when the Four say it’s time to jump, “How high?”

When America’s Founding Fathers looked into their nascent country’s future, none of them saw this coming. They saw a risk of armed attack from without. Hence, the (now vexing) Second Amendment. They saw a risk of one large state (New York at that time) dominating the others. Hence, the gerrymandered Senate and the Electoral College. They even saw the risk of some crisis degrading the new US dollar’s value. Hence, the multiple Federal Reserve banks. What they never envisioned was that four youngish congresswomen might one day seek to undo from within all the boundless promise of a free and fearless America.

Two and a half centuries later. Here we are. The Four Horsewomen of the American Apocalypse have grabbed their scythes, mounted their ghostly steeds, and are ready to ride. Will it be tonight? Next year? Or very soon after?

The Devil may have gone down to Georgia a while back. But now he is licking his lips.

12 thoughts on “The Four Horsewomen of the American Apocalypse”

A Visit with My Local Member