America Observed With an ABC Squint

The BBC is facing a citizens’ crowd-funded lawsuit against its left-biased reporting, while the ABC is still forgetful that half of its funders are centre-right taxpayers. The latest ABC annual report trumpets Leisa Bacon, director ABC audiences, on its second page proclaiming, “The ABC is unique in its ability to  unite the nation … we are here for every Australian”.

The ABC’s online surveys and Roy Morgan polls show massive trust in the ABC, but why do fewer than 20 per cent of the polled actually tune in? For 2017-18, by the way, ABC 7pm News audience fell 5-8 per cent.

The most naked bias at the moment is in the ABC’s pro-Democrat US reporting, since few Australians cross-check the material. So let’s sample ABC bureau’s July 4 Independence Day coverage in Washington DC.[1] The reporter is Conor Duffy, mocker-in-chief of President Trump.

For his print piece, falsely labeled “analysis”, the ABC gave us a choice of three headlines. “Trump dreamed of pomp and ceremony. Instead he got soggy tanks”. Maybe that was too deranged, even for the ABC, so a second version went: “ANALYSIS: Wild weather, small crowds and protesters rain on Trump’s parade.” The third top read: “Donald Trump hoped for a parade to rival Bastille Day, instead he got small crowds and soggy tanks”.

For starters, there were no tanks on the Mall, especially not soggy ones. The 25mm chain gun on the two parked Bradley Fighting Vehicles is a pet compared to an Abrams tank’s 5.3m smoothbore of 120mm calibre.

Small crowd? Duffy estimated it as “thousands or tens of thousands” (live TV) or “in the thousands, rather than the hundreds of thousands promised by Mr Trump” (Analysis).  Maybe he picked up about “likely attendance woes” from Politico’s blog that week, piled on by the other liberal media with their history of 90 per cent anti-Trump pieces.

Politico had claimed, via the usual anonymous sources, that “heads are spinning at the White House as Trump’s July Fourth crowd shapes up to be another Inauguration-level disaster.” Trump was even, allegedly, handing pals freebie tickets in multiples of ten. It was double-fake news as the turnout for Trump’s inauguration “disaster” was 500,000 or more, according to Wiki’s experts.

On the day, the Twitterati claimed the official July 4 pics had been PhotoShopped by the device of pasting in a giant crowd from a previous event. This meme died suddenly as leftists recognised their own-goal.

Remarkably, Duffy’s story embeds a video showing, for two seconds anyway, a glimpse of the enormous crowd. On each side of the Mall’s ponds is a packed mass stretching to the high horizon. No-one these days attempts a count. But you can eye-ball it based on an MCG finals crowd of 100,000. There’s at least one MCG unit lengthways (3km) on each side and another unit filling in to the Capitol. Maybe Duffy could visit an optician.

The lead-in to Duffy’s July 5 news report at 7pm was that Trump had “politicised” the holiday. But on Saturday, ABC TV news had another of its US team, James Glenday, saying, “There was actually almost no politicisation of the event at all, despite what his opponents had said.” Bravo, Glenday. But watch your back there.

Duffy didn’t “analyse” why a president shouldn’t do a “Salute to America”. Anyone who takes in Trump’s address can get the full sense of partisan-free American pride. Here’s a sample:

“From our earliest days, Americans of faith have uplifted our nation. This evening, we are joined by Sister Deirdre Byrne. Sister Byrne is a retired Army surgeon who served for nearly 30 years. On September 11th, 2001, the sister raced to Ground Zero. Through smoke and debris, she administered first aid and comfort to all. Today, Sister Byrne runs a medical clinic serving the poor in our nation’s capital. Sister, thank you for your lifetime of service. Thank you.”

Pity our schoolkids won’t ever be shown this first-class speech, or encouraged to read its full text, as counter to the customary classroom bashing of America and capitalism).[2]

Speaking for myself, Duffy can be cringe-inducing: “But like a handshake with French President Emmanuel Macron, the American leader was once again left crushed.” Duffy’s link shows Macron taking Trump unawares with a wraparound handshake. I doubt that Trump, who is twice Macron’s build, felt “crushed” then or “crushed” by the size of his Mall crowd. Rasmussen polls a few days later put his approval rating at a 50 per cent high.

Duffy’s sensibilities are also affronted by the Salute’s minor military elements. His so-called “tanks” are not just soggy but “a little sad”, “awkward”, “jarring”, “inelegant” and with “autocratic undertones”. In a linked piece, they’re “grotesque”. He likens the show “to the crass displays of North Korea and China“, albeit by quoting “critics”, a standard ABC deceit to inject bias. I’m surprised he didn’t run an interview with Laurence Tribe, a Harvard Law Professor, who said that the “tanks” were a chilling presage to a possible Tiananmen-style massacre. Not to be outdone, New York Times columnist Charles M. Blow tweeted, “Let this sink in: There are tanks in the nation’s capital and concentration camps at its border. The drift toward the unimaginable is unmistakable”.

OK, Prof Tribe and Mr Blow, fret and fulminate all you like. But Democrat President Kennedy paraded nuclear missiles down Pennsylvania Avenue, as pictured below. The tank-horror media spin collapsed anyway because half a dozen real tanks (not to mention a Patriot missile launcher) are featured at Washington’s army expo each October. 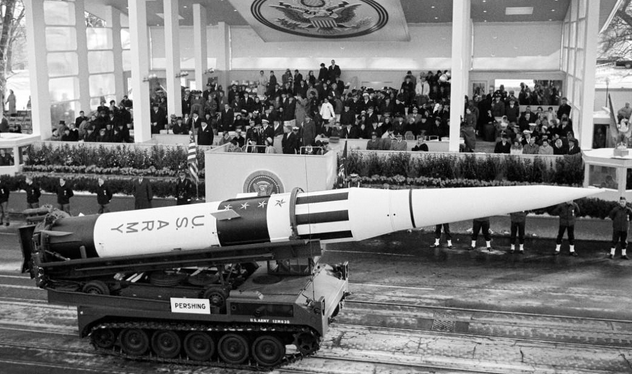 I saw more tanks and cannon parked at Victoria’s modest Avalon Airshow last March than there were at Trump’s Mall. When I was at the Mall for an Obama-era Independence parade in 2012, the only weapons were rifles of a few small services contingents and wooden facsimiles carried by costumed schoolkids. Nice, but maybe the Obama era was a little too dovish. Three years later, Obama refused to bomb Turkey-bound ISIS oil tankers to avoid “environmental damage”.

Duffy’s 7pm News report also featured the giant (6m tall) Baby Trump balloon and its 10-20 supporters — maybe those were the “protestors” in his ABC headline. Duffy’s report included a loving 33-second clip of the tethered balloon being turned around, plus a sidebar linking to the ABC’s  850-word balloon backgrounder ( “The Museum of London is even working to acquire it”). Surely our unbiased ABC did angry-nappy-baby-Trump to death during his London visit?[3]

Duffy finished his to-air piece with a smattering of vox pops — quotes from supposedly random individuals. The first two (as I recall) were Trump-negative, and then there came a couple of Trump supporters, presumably in the name of balance. The overall impression, though, at least on me, was that rational souls correctly regard Trump as “the worst president in history” (“a criminal”, “corrupt”, “incompetent”).

Careful, Duffy’s ABC. You do have a charter for impartiality. Maybe one day you’ll look it up.

[2] I concede Trump mangled his script and referred to revolutionary-war “airports”. He claimed the heavy rain had shorted his teleprompter at that point.

[3] Here’s just a sampling of ABC News headlines on its myriads of baby-balloon stories:

…to each according to his vote