The Ultimate Reversal of Fortune 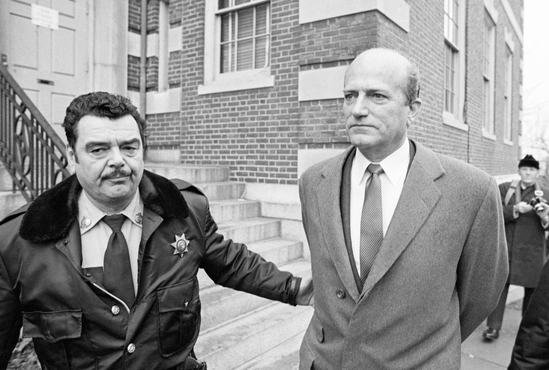 When Sunny von Bulow finally breathed her last on December 6, 2008, it was said that her obituary may well have been written 28 years earlier, when she fell into a coma from which she would never recover. Her life was a twisted version of the Grimm Brothers’ fairy tale, Sleeping Beauty. No one in history is said to have slept for as long as Sunny von Bulow, nor has the cause of her coma been the source of such mystery and scandal. The death on May 25 of her second husband, Claus, in London at the age of 92 signals the end of a grim tale.

Claus Cecil Borberg was born in Copenhagen on August 11, 1926, the son of Jonna Bulow and Svend Borberg, who divorced when he was four. Sven was a leading drama critic who greatly admired the Germans, even after they occupied Denmark. He was — like his son — convicted, and later acquitted on appeal His crime was collaboration (Claus said his father ‘dined with the wrong people’). A year after his imprisonment, Svend Borberg, died, broken and ostracised. In the face of this disgrace, and the fact that Borberg was so besmirched, Claus took his maternal grandfather’s name, Bulow. (Frits Bulow had, ironically, been a Minister for Justice).

His mother was residing in England at the time of the German invasion of Denmark. Claus was spirited there via Sweden in the early years of the war through the efforts of the von which attached to a senior branch of the family was later, with the lightest touch, adopted by Claus. At only sixteen, he was accepted into student-depleted war-time Cambridge, from which he graduated in law in 1946. Too young for the bar, he spent a year in Paris auditing courses at the Sciences Po and found himself among the gratin. After a stint with Hambros bank in London, he joined the chambers of Quintin Hogg, later Lord Hailsham. In one of his most brilliant profiles for Vanity Fair, Dominick Dunne discovered that during the 1950s these chambers handled the first known case of murder by insulin injection.

Claus and his mother bought a grand apartment in Belgrave Square, which, he quipped, “dined two hundred with ease and slept three with difficulty.” One guest described it, “Grand staircase, an enfilade of drawing rooms — not very English. And a wonderful, serious butler called Knights.” He rented it out to his friend John Aspinall for private gambling parties and of course befriended Lord Lucan. Claus’s backgammon was superb. According to Dunne, Claus had an affair in St Moritz with the equally infamous Ann Woodward after she had killed her husband.

In the early Sixties, when he was in his early thirties, Claus was engaged as an administrative assistant to the fabulously rich and notoriously tight-fisted J. Paul Getty, who had moved from Los Angeles to London. Getty hated to fly, so Claus traveled for him, frequently representing him at meetings and reporting back. Dunne claims Claus earned less than $20,000 a year but he always spoke of the cranky old Croesus with great affection. For Getty, Claus was his right arm. Dunn, as was his way, relished the rumours that swirled around this Gatsby-like figure. “Who exactly is Claus von Bülow? …….. a page boy at Hermann Göring’s wedding? A necrophile? A spy? Had he killed his mother and kept her body on ice?  According to Dunne, Claus either had a logical explanation for each rumour or shrugged it off as ludicrous.

A question persisted, how much of Claus was real and how much self- invention? One associate pronounced, “Claus is trompe l’oeil”. His charm was unmistakeable and while he perfected an impeccably patrician air and a courtly manner, his  humour was either self-deprecating or positively princely. He told Dunne in their interview of “a fellow who was so proud of his malachite cuff links until a grand duke said to him, ‘Ah yes, I used to have a staircase made of that.’”

His life changed in 1963 when he met Martha Sharp Crawford, the only child of George Crawford, the founder of Columbia Gas & Electric, and Annie-Laurie Warmack, the daughter of the founder of the International Shoe Company. She was born on a train between White Sulphur Springs and New York and earned the name, Choo Choo. Her father died, aged 79, when she was only four, leaving her a fortune of $AU175 million. Her looks and disposition soon earned her the sobriquet, Sunny. She was ferried to school, Chapin in New York, in a Rolls Royce and later attended St Timothy’s in Maryland.

After school, chaperoned by her mother, she lived the life typical of an East Coast heiress – grand tours and couture. Annie-Laurie had remarried a famous hunter, Russell B Aitken, and in 1957 at a fashionable club in Kitzbühl, Sunny met and fell in love with her own crack shot, Prince Alfred von Auersperg, the handsome, athletic but penniless scion of an old Habsburg family. He was then working as a tennis pro. They wed and lived in a chalet in Kitzbühl and had a daughter, Ala, and a son, Alexander. But Alfred resumed his pursuit of gamine as well as game (including an affair with Gina Lollobrigida) and they divorced in 1965. Sunny returned with her children to New York, joining her mother and grandmother.

Claus and Sunny wed in 1966 and the following year their daughter, Cosima, was born. John-Paul Getty agreed to be her godfather. They bought Ailsa Mellon Bruce’s very grand apartment at 960 Fifth Avenue and acquired pictures by Ingres, Watteau and Turner (one mondaine New Yorker observed the 44-foot drawing room had ‘far, far too many legs’ but the legs were Chippendale). They gave European drawings to the Morgan in 1977 and during that decade the Met also received some paintings, a 19th-century bronze and a pink feathered Givenchy gown of Sunny’s. In gratitude, halfway up the Met’s grand staircase, carved into the wall of patrons ‘CLAUS VON BULOW’. 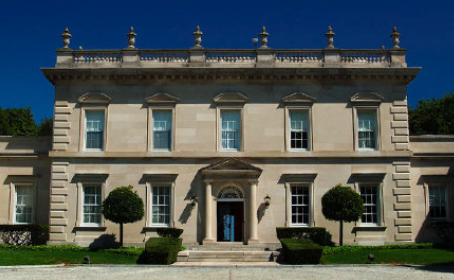 They also purchased Clarendon Court (right), a 20-room Palladian mansion facing the Atlantic at Newport Rhode Island, a 1904 copy of Colen Campbell’s Hedworth House in Durham. Clarendon served as the set for the Lords’ mansion in High Society, starring Grace Kelly as Tracey Lord, to whom the new owner bore more than a passing resemblance.  Claus was relentlessly social while Sunny increasingly preferred seclusion. Her Auersperg children called their stepfather ‘Uncle Claus” and “Ducky”.

Dominick Dunne described Sunny’s routine: She rose at about eleven, phoned her mother, was chauffeured to an exercise class, shopped, lunched, changed into her pyjamas, and watched television with Claus. She went to bed early. Their four beloved Labradors shared their bed. By the late 1970s this marriage too was floundering and it was said that Sunny had taken to drink and drugs to mask her misery.

In December 1979 Sunny was admitted to hospital unconscious. She was revived and advised to abstain from alcohol, barbiturates and tranquilizers. Hospital records of a visit in April reveal her admission to heavy drinking and drug-taking and this was borne out by a urine test. Six months later on 2 December 1980, Sunny became aware of Claus’s affair with a Danish aristocrat and actress, Alexandra Isles (nee von Moltke). Her reaction was to ingest nearly 100 aspirins. And then, three weeks later, Claus came in from walking the Labradors to find Sunny unconscious on the bathroom floor at Clarendon. She was taken to hospital and in 1981 transferred to Columbia-Presbyterian Hospital in New York and later to a Manhattan nursing home. From this coma she never awoke.

Claus was accused by Ala and Alexander of injecting Sunny with insulin. His subsequent prosecution, conviction, appeal, retrial and acquittal for attempted murder are remembered still. Sir Paul Getty, the old boy’s grateful son, funded the appeal (which was apparently repaid).  The saga, which ran from 1981 until 1985, attracted enormous media attention. One of the first trials to be televised, it drew higher ratings than most of the popular soaps. It had everything — a great house brimming with treasures, a princess, stepchildren, a fortune, two mistresses, and even its own Mrs Danvers, Maria Schrallhammer, Sunny’s devoted maid, who twice testified against Claus and provoked (another heavy-handed Claus joke) his friend, the Dowager Marchioness of Dufferin and Ava, to lament, “I know how difficult it is to get a good maid. But this is ridiculous.”

The case itself became a film, Reversal of Fortune, in 1990 based on the book by Claus’s appellate counsel, Alan Dershowitz, and starring Glenn Close as Sunny, a slurry lacquered plastered ball-gowned WASPish wreck, just one ice-cream sundae and whisky away from sugar-induced oblivion. In one scene, Dershowitz exclaims to Claus, “You’re  a very strange man”. Claus countered, “You have no idea.” In a masterly performance that won him as Oscar, Jeremy Irons played a slightly sinister yet equivocal Claus, who claimed annoyance that Irons did not lose weight for the role and said he would have preferred Robert Duval. Dershowitz had also defended Mike Tyson and Patty Hearst and when Claus and Irons met, he asked the actor if he would play them next. “I’ll have a crack at Patty,” Irons replied. “But Tyson may be beyond my range.”

In 2007, a study, entitled Insulin Murders, by Professor Vincent Marks, a diabetes specialist, and Caroline Richmond, concluded drugs and alcohol as the cause, confirming Claus’s innocence, and the final verdict, that Sunny’s coma was not induced by insulin.

Claus returned to London with Cosima and resumed his place in the circle he had left. His friend, the High Life columnist, Taki Theodoracopulos, quipped, “Nothing shocks the English upper crust. The only thing that one can do that is unforgivable is go bankrupt.” In 1987, he divorced Sunny, pledged his silence and renounced any claim on her estate to secure their daughter’s inheritance from her grandmother. He embraced Rome (“a convert from the Joyless Danish Lutheranism of my birth to sunny Mediterranean Catholicism”), he led pilgrimages to Lourdes and visited the sick (though, as the writer Glenys Roberts noted) they were generally well-born sick). He was a member of Brooks’s, one of London’s smartest clubs, and, for a time, acted as the theatre critic for the Catholic Herald. In 2001, Tatler named him London’s 46th most sought-after guest.

Cosima (now Countess Pavoncelli, the wife of a polo-playing Italian banker and the mother of three, all of whom survive her father and their grandfather), continued to contribute art, on her mother’s behalf, to the Pierpont Morgan Library’s Sunny Crawford von Bulow Fund established by her parents in 1977.

For almost a decade Ala and Alexander had the appalling misfortune to have both parents in comas, after their father suffered a car accident in 1983. Alfred von Auersperg eventually died in 1992. Dunne claimed that as they stood together, as parents of the bride, in the receiving line at Ala’s first wedding, Alfie (as if he had taken a cue from the script of High Society) asked Sunny to discard Claus and remarry him.  These two children, who never doubted Claus’s guilt, founded the Sunny von Bulow National Victim Advocacy Centre in Fort Worth, Texas, and the Sunny von Bulow Coma and Head Trauma Research Centre in New York. Clarendon Court, a place of such sorrow and scandal, was sold in 1988. Some paintings, porcelain, silver and furniture were also sold, fetching more than $25 million.

Surrounded by flowers, her favourite music and family photographs, regularly attended by her hairdresser, manicurist, and nurses, and visited by her two elder children, Sunny slept for 28 years, twice as long as even Wallis, Duchess of Windsor’s, long decline. She continued to breathe normally, having no need for a respirator.  She was fed intravenously three times a day. It was said that sometimes she appeared to be smiling; and sometimes in tears but she never regained consciousness.

The noxious weeds in our food bowl