Diversity Is Fine, Just Not Too Much Of It 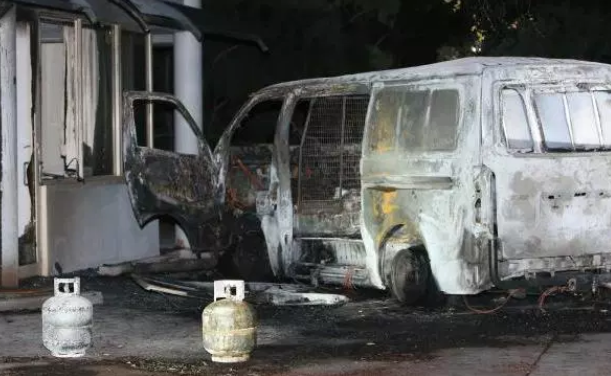 The bomb-laden van driven by gay activist Jaden Duong, who detonated it after ramming the Australian Christian Lobby’s HQ in Canberra in December, 2016.

It is undeniable that until about a generation ago homosexuality was openly, often vigorously, despised by respectable society. People, especially males, known or suspected to be sexually attracted to others of the same gender were shunned, mercilessly ostracised, subjected to verbal and even physical abuse. Many lost their jobs, had successful careers destroyed. They were the favourite butt of cruel, distasteful jokes. Engaging in homosexual acts was a criminal offence in Australia.

Astute homosexual personalities conducted a fabian campaign of slow steps to modify and hopefully eliminate the seemingly universal hostility afflicting their ranks. The best known of their activities became the annual Gay and Lesbian Mardi Gras, now replicated in dozens of cities all over the world. It began not as a celebration of sexuality but as a protest against the severely unfavourable stance of the rest of society, most particularly that of the NSW Police. Its success turned out to be nothing less than spectacular. Nevertheless, the decriminalisation of homosexuality in Australia dragged on for 22 years, beginning in South Australia in 1975 and ending in Tasmania in 1997.

Alas, the pendulum has swung not merely the other way over recent years but to the opposite extreme. Not only is it now strictly verboten to express the mildest disapproval of homosexuality, it is proper and expected that it be celebrated. Once a shameful stigma, homosexuality is now a veritable badge of honour — an honour that must be constantly and vigilantly defended against all attacks, real or imagined. A telling example is the stunning response of the gay communities to the proposal by heterosexuals in several cities to organise straight Mardi Gras — a proposal perhaps made tongue in cheek — but nevertheless forcefully condemned by the gay lobby as aggressively homophobic.

The current controversy surrounding Israel Folau is yet another sad and sorry demonstration of the phenomenon. His “offending” was the naming of eight deeds and behaviours in a social media post which he, in accordance with Corinthians 1:6, deems sinful. He did not denigrate or even criticise those to whom the list might apply, he simply warned they would end up in hell if they failed to mend their ways. A caring caution, one might say, to all his brothers and sisters, devoid of the slightest trace of malice. Those who share his religious beliefs would wholeheartedly agree with his sentiments, while those who don’t, particularly atheists, might simply have ignored it, even laughed it off as nonsense while dismissing Folau as a holy-rollin’ ratbag.

Folau’s grave mistake was the inclusion of homosexuality in his list of sins. It is most unlikely that fornicators and drunks took offence, but mention of the once-condemned/now-revered LGBTI sexual orientations ignited calls for his head. The outrageous outcome is that Folau’s multimillion-dollar rugby contract has been cancelled, his stellar career in the sport destroyed.

Unconfirmed, yet widely believed, is that pressure to banish Folau was bought to bear on Rugby Australia by sponsors, a campaign in which Qantas is widely cited as the chief suspect. That observers would surmise as much is hardly surprising, given the airline’s CEO, Alan Joyce, is an openly gay man who urged his employees to become part of the ‘yes’ campaign during the postal plebiscite on same-sex marriage. Joyce has denied playing any part in Folau’s sacking, dismissing the claim as “outrageous” while simultaneously stating his support for the expulsion.

Whatever communications might have passed between Rugby Australia and its lead sponsor, it is worth noting that Qantas has substantial partnership arrangements with a range of other international carriers, including some owned by Muslim countries where homosexuality is a capital crime. Mr. Joyce’s silence on these relationships is open to the observer’s interpretation.

The despicable clamour to humiliate Folau, arguably the world’s best player, and deprive him of his income has been shamefully abetted by politically correct and utterly spineless rugby officials, the deafening silence of  cowardly teammates and, it must be said, many fans of the game as well.

The gay community, especially their activists, should realise that the further they push their grievance agenda, the more they will alienate the rest of society. That much should be apparent from the flood of cash pouring into Folau’s legal defence fund, which soared past $500,000 in just three days.

On Monday, June 24, that campaign’s fund-raising page was taken down by gofundme, which said it did so in the name of diversity, tolerance and equality. Yes, really. Some are more equal than others, it seems.

While activists celebrate taking Folau’s scalp they should also be aware that there remains more than a little anti-gay sentiments smouldering in society. Irresponsible over-reactions to real or perceived slights fan those embers and the resulting flames could well consume the goodwill still prevalent among the vast majority of decent, fair-minded people.

Those so keen to pillory one man for his uncompromising beliefs should remember that the further pendulums is pushed in one direction, the harder it returns in the other.

The law in black and white

What’s in Store for the Women of Afghanistan