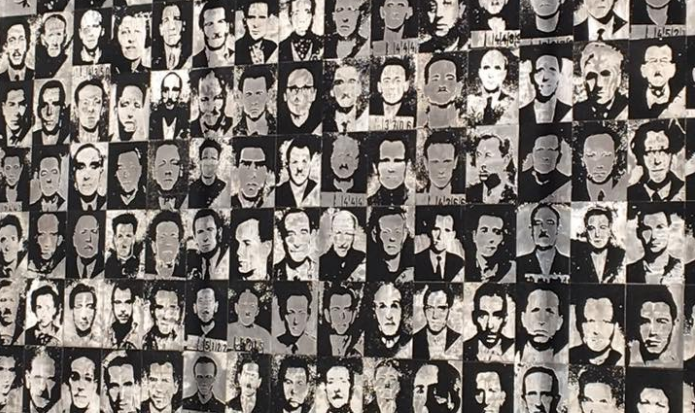 Bernie Sanders very nearly won the US Democratic Party’s nomination in 2016, only losing due to Hillary Clinton jiggery-pokery of the party’s rules around ex officio voting entitlements.  But here’s the thing.  What does it tell you about core Democrat voters that so many, probably more than half, would support a self-proclaimed ‘socialist’? Look at young Democrat activists and it was a lot more than half  who supported the long-time socialist Senator from Vermont.

What’s the big deal, you might ask?  Well, I think it boils down to the man’s moral antennae vibrating at such a shocking and illiberal frequency.  Sanders is the man who, in 1988, took his honeymoon in the then USSR. Some footage of the happy couple is below.  Just to remind you, that was before the Berlin Wall came down, the collapse of all of the satellite Soviet regimes and, indeed, of Soviet Russia itself.  New footage of that Sanders’ honeymoon trip has recently come to light, with Bernie sitting near or under portraits of Lenin (a mass-murderer himself, though not in the same league as Stalin, I concede) while praising the virtues of Soviet life.  Was the man completely unaware of the activities of the secret police?  Or did he just think a few eggs have to be broken to make an omelette?

And did you know Sanders was at that time already into his second term as mayor of Vermont’s biggest city, Burlington? Later, he would go on to support the Sandinistas in Nicaragua; to favour a massive warming of relations with Cuba; and to support the revolutionary policies in Venezuela, at least early on.  Let’s put it no more harshly than this: Mr. Sanders is blinded by his own ideology and seems to think that life in a non-Western, non-capitalist country is better than it is in the US.  I believe the scientific word for such beliefs is ‘bonkers’, but correct me if I’m wrong.

Inevitably, Sanders is again seeking the nomination of the Democratic Party in the US to contest the 2020 Presidential election against Donald Trump, and there would be millions of Americans who think Sanders the preferable candidate – and I mean a better choice on policy grounds, not simply the better exemplar of married life or some other personal quality.  This is Trump Derangement Syndrome turned up to eleven.  Let’s be clear:  Sanders is an economic know-nothing, as is anyone who believes a centrally planned economy can outperform, or come anywhere close to equalling, a market economy in a capitalist system.  Sanders is also wilfully blind to the oppression that is needed to suppress the disgruntlement and objections that such Soviet-type systems, or even hard core socialist systems, give rise to.

Want to know why we desperately need the Ramsay Centre to start educating at least some young Australians about the virtues of Western history and Western capitalism?  It’s because our universities, at least in the social sciences and law, have far, far too many academics who would opt for Sanders over Trump without blinking an eye and who deep down despise Western civilisation.  They prefer most other comers.  That’s also what makes it near on impossible for the Ramsay people to hook up with an Australian university.  Under the cover of ‘autonomy’ the chosen university will teach the sort of anti-Western diatribes the Ramsay money is meant to combat.  Frankly, I don’t believe there is any way for Ramsay to hook up with any Australian university and still push the pro-Western line.

If you object to the pro-Western civilisation line then you are part of the problem.  Let me be blunt.  In terms of a host of criteria, including the treatment of women, the fostering of scientific knowledge because of a core commitment to the free exchange of ideas, the advancement of better treatment for individuals (again, in part, due to a core commitment to free speech and the holding up of all ideas to criticism and attack – so all you Coalition MPs who have called free speech a ‘third order issue’ ought to be ashamed of yourselves), and also the belief in democracy as the Churchillian ‘least-bad’ system of government going, the West is the best civilisation yet to have evolved.  I don’t apologise for that claim. In fact those who think all cultures are equal seem to me to run into the problem that in the philosophy of science is know as ‘the facts’.

At any rate, that is a long-winded way of telling you about the time my wife and I are having in Budapest.  I am here for a fortnight for work as part of my sabbatical.  Our two kids live and work in London and they came for a long weekend visit to the capital of Hungary.  Budapest is a beautiful place and is prospering in part from having not adopting the euro.  It has also founded a new museum — The House of Terror — to which all four Allans traipsed this past Sunday.   Every single Australian teenager should have to visit this place.  What this ‘House of Terror’ museum does is to document the evils of totalitarian systems, the ones that ran Hungary for about half of the last century.

It starts with the Nazis for a few years in 1940s and then moves to the Soviets and the Hungarian communists who took their orders from them.  The museum is housed where the Hungarian Nazi secret police headquarters were located.  Interestingly, when the Communists took over, their secret police used the same building.  You start upstairs and work your way down.  By the time you are in the basement you are seeing the cells where so many political prisoners were killed.  You are seeing the torture chambers.  You can look into the room with the gallows (pictured), the one where they left people in a couple feet of water, the one where it was impossible to sit or lie down and you had to stand for days on end, the various beating rooms, the faces of the prisoners who suffered there … the list of depressing exhibits goes on and on.

Take it from me, it’s hard to remain in that basement for more than a few minutes.  I wanted to fly in Bernie Sanders, paying his airfare on my own dime, and have him tell me what, exactly, he liked about the Soviet system.  Or about Venezuela’s socialist utopia – because you can bet your bottom dollar the political police there indulge in a spot or two of ‘terror’.

You can also see commemorations of the many Hungarians who died or were tortured in the aftermath of the 1956 uprising.  You learn what it was like to live in a centrally planned economy. You discover that the result was not ‘equality’ but, rather, that inequality depended on where you stood in Communist Party.  The higher up you were, the more you got of things no one else could have. If you weren’t in the Party, forget about it.  And if you were deemed to be an opponent of the system, well they might not even let you work.  You became, in effect, a beggar.

How many Australian high school kids have a basic idea of all this?  That’s not a rhetorical question because I really do wonder.  My guess is that it’s not anywhere near as many as it should be.

I finish by recommending Quadrant Online readers take a trip to Budapest.  It’s a beautiful European city with hints of Paris.  The government is in open ‘cold warfare’ with the European Union technocrats because it has refused to open its borders and has been very careful that newcomers will be likely to assimilate the values of the country in which they seek to live – sort of like the way things were for a century or more in Australia, Canada, the US and Britain before the worst side of multiculturalism (the ‘all cultures are equal’ idiocy) took hold.  The food is excellent.  So too is the Hungarian wine.  It’s cheap, even on an Australian dollar.

And did I mention the magnificent new museum that’s opened, the House of Terror?

James Allan is Garrick Professor of Law at the University of Queensland and the author of Democracy in Decline. He is in on sabbatical in the UK

Let Us Raise an Army of Leaks

George Pell and the Ladies of the Left