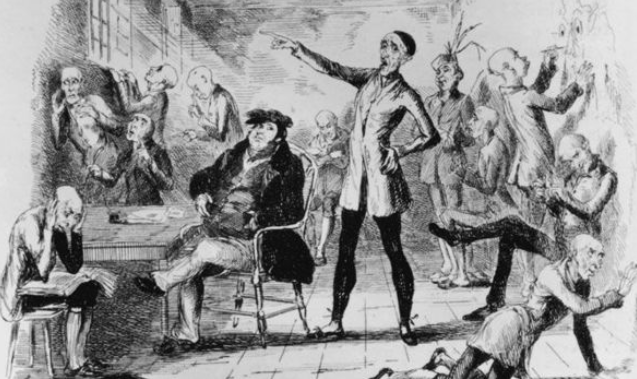 In the debate over the establishment of the Ramsay Centre for Western Civilisation, no one has sniped and sneered from the opposing camp with anything quite like the ferocious energy of Dr. Nick Riemer, senior lecturer in English and Linguistics at the University of Sydney. No doubt, his noisy interventions must leave many longing for the days when the musings of academics were only available in the mercifully unreadable journals of the academic Left. Riemer, with his endless tweets, op-eds, essays, and campus protests, has been very difficult to avoid.

Not that I really mind, I have to confess. Surprisingly, whenever I come across Riemer’s latest hissy-fit in the Sydney Morning Herald, I react with wry appreciation rather than annoyance. You see, those of us who support the goals of Ramsay couldn’t have asked for a better enemy. His arguments — I’m being charitable when I use such a word — are so risible that I’m doubtful that he has persuaded anyone at all. If anything, he has powerfully made the case for the Ramsay Centre in a useful albeit unwitting manner.

Although Riemer’s campaign has been running for months, he introduced himself to a wider audience in the aftermath of the massacre in Christchurch. In a much-discussed column, he set out his reflections on that awful event in his characteristically obtuse way:

Many academics have accused Ramsay of being the intellectual face of a Western supremacist politics, and therefore fundamentally incompatible with universities’ obligation to support multiculturalism.

I like the honesty here: indeed, only academics could come up with such a ridiculous notion. The general and far more intelligent public would struggle to find a connection between a fondness for Plato and Aristotle and the horrors of white supremacy. Riemer, though, encouraged his readership to “reflect seriously on how the Ramsay curriculum validates the worldview behind Friday’s massacre.”

Well, Riemer seems especially bothered — or “triggered”, as the kids say these days — by the proposed reading list and its suggestion that the Great Books ought to be studied as a whole. That is, one should begin with Homer, stop by Augustine, and follow up with Shakespeare and Nietzsche. For Riemer, this will logically lead students and the Australian society at large to adopt attitudes of European supremacy, and only bloodshed could follow that.

Looking back, it’s obvious Riemer’s case against Ramsay would end up here. He had previously asserted, without any explanation, that the mere existence of Ramsay on campus could be physically harmful and constitute “a threat to students from non-Western backgrounds.”

If all this seems a bit bewildering, then congratulations: you, dear reader, have been spared whatever passes for an education in the humanities at our universities. Riemer apparently sees sinister and bloodthirsty motivations where none exist, and his vision is hard to square with the Ramsay Centre’s humbly stated ambition to “promote an interest in and awareness of Western Civilisation.”

For this reason, his connecting Ramsay with the massacre of innocent Muslims at prayer deserves special condemnation. The thinking here goes something like this: the murderer in Christchurch fretted about the state of the West, and anyone who shares those concerns must similarly share his aims and approve of his methods. This is an inexpensive and asinine trick, and an academic who is allegedly interested in the use of language should know better.

It’s too easy to point out, for example, that Riemer’s rhetorical flaying of the Western world, its heritage, as well as Israel and Zionism (of course) would meet the approval of any hardened jihadist. Let me hasten to add that such a comparison is unfair, of course. Despite some ideological comradeship, Riemer probably wouldn’t make a good recruit for the Islamic State.

No comparison is really necessary, anyway: dealing with Riemer and his shabby arguments is easy enough. Writing for a more ursine audience in Overland, he allowed himself to be even more unpersuasive in a follow-up rant:

In arts faculties themselves, the danger posed by the ‘Western Civilisation’ program has been clear to all but a small group of hold-outs. Driving the opposition to Ramsay has, of course, been the self-evident fact that the whole project is an initiative of the racist right…

One can begin to detect the elements of his strategy here: meet the word count by banging on about xenophobia, chauvinism, and white supremacy without ever saying anything meaningful at all. It’s remarkable, in a way: apparently, you can can easily get a series of non-sequiturs published in national newspapers and magazines. He groped his way towards an argument by drawing attention to the list of speakers for Ramsay’s public lectures, which includes Greg Sheridan of The Australian, the leftie writer and editor of Areo, Helen Pluckrose, and Rod Dreher of The American Conservative, among others.

And? So what? There’s certainly more intellectual diversity here than what you’d find at the typical humanities faculty meeting at, say, Mr Riemer’s Sydney University roost, where I’m sure there are hugely varying levels of commitment to the revolutionary struggle. And that’s the point, after all. Riemer, backed by an army of his colleagues, demonstrates just how corrupt and rotten and censorial the universities have become. The Australian public knows it, too, and Riemer seems to be working hard to convince them further.

That’s why I welcome his efforts. In all his anti-Ramsay whinging, one sees, very clearly, the case for the Ramsay Centre and why it must succeed. I suspect that Riemer may ultimately assist with this project rather than his own. In a small way, the Great Books program will be established not despite his interventions, but because of them.

Nick Riemer and his co-thinkers don’t know it, but their petulance and intolerance of others’ ideas is further proof of the need for the Ramsay Centre. Among the many things they don’t know and can’t understand, he and they are actually helping the right side.

Timothy Cootes has written for Quadrant, Quillette, and The Spectator Australia. He lives in Sydney.

A Case for Immigration Reform

Why Shorten Loves the Budget