Learning to Leave Beijing Behind 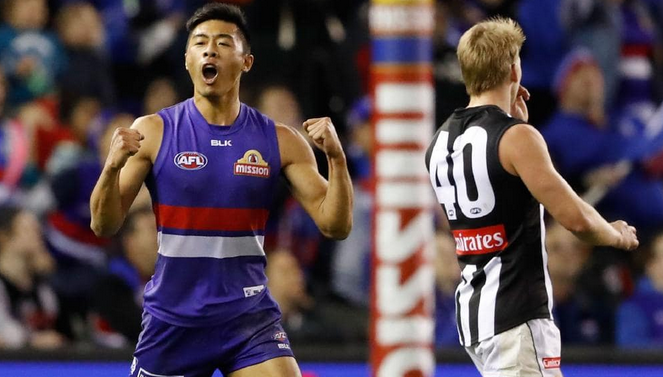 Rather than looking to Beijing, Chinese-Australians would do well to seek inspiration from the likes of Western Bulldogs star Lin Jong — Australian to his boot stops.

It is often said that we Chinese migrants leave our “loyalties” planted in the motherland, despite living in Australia. This statement may be distasteful but, sadly, there has been much truth to it. The good news, however, is that since the Foreign Influence Transparency Scheme (FITS) came into force, change for the better is afoot.

Although the Australian government claims the new legislative measures are not aimed specifically at any one particular country, the probability of hitting Chinese targets is high.  Over recent years, a series of controversies has repeatedly thrown the Australian-Chinese community into the media spotlight: political donations, registration of foreign government agents, Confucius Institutes and so on. Even the New Zealand terrorist who took 50 lives dragged the Chinese community into the limelight by claiming to have been inspired by the policies of the Chinese Communist Party.

With the federal election approaching, Chinese-Australians in politics have once again caught the public’s attention, as viewers of last night’s 4 Corners would know. Take NSW, for example, where some Chinese-Australian politicians purposely catered to their ethnic community’s “patriotic” mentality, gaining their seats in parliament on the strength of community votes while remaining close, far too close, to the Chinese consulate. Consider NSW upper house member Ernest Wong, for example, whose cultivation by Chinese operatives became the stuff of headlines late in 2018, when the Sydney Morning Herald reported that Australian security agencies had acquired evidence of “direct dealings between suspected Chinese government intelligence agents and Mr Wong.” The paper stressed there was no suggestion Mr Wong had ever acted inappropriately, but there is a lesson to be gleaned all the same: rising Chinese-Australian politicians should consciously avoid influences from foreign powers while actively guiding immigrants to embrace the diversity of Australia and truly love this country.

The grace period for voluntary registration of “foreign agents” has ended with only a handful of organisations having registered, none of which are Chinese. The government has sent reminders to all groups that may be acting on behalf of foreign governments or serving as their agents. As chief editor of Vision China Times I hear from readers who are calling on the Australian Council for the Promotion of Peaceful Reunification of China (ACPPRC) to register as a foreign agent. Although I am unaware if they intend to do so, I think it a wiser policy to be transparent rather than deny the obvious.

Openly declaring oneself a foreign agent is not something to brag about. Thus it is not a bad thing that many Chinese community organisations, small and large, have been propelled to self-reflect and, in some cases, start afresh. We do not want to see further news of visits by Federal Police dominating media reports.

Chinese language media is an important channel for Chinese immigrants to understand Australia and integrate into this society. It should never be a tool by which foreign powers take advantage of Australia’s liberalism to advance their own agendas. If the Australian government concludes that most Chinese language media is controlled by foreign powers, doubts will inevitably arise over the loyalties of all within the Chinese community.

Chinese migrants wishing to call this country their home should try to learn Australian culture and history, respect Australian values, learn to sing the National Anthem and abide by Australian laws. In return, we are welcome to share our Chinese culture with all ethnic groups and they with us. Collectively, we need to love Australia as a country. Some Chinese migrants do not distinguish between the Chinese Communist Party and the country it rules, thus bringing bad habits from our old country into Australian society. Moreover, such an attitude promotes the feeling that “anti-China forces” are everywhere. Needless to say, this segment of the Chinese diaspora has failed to treat and cherish this land as their own.

As Chinese-Australians we have the obligation, for ourselves and future generations, to open our eyes and use our votes to elect politicians who genuinely represent the voices of the Australian-Chinese community.

One thought on “Learning to Leave Beijing Behind”

Stamping Out The Postie