Rules? The Left Grants Itself Immunity

Rules, what good are they when the Left is inconvenienced and the progress of its agenda impeded?

That’s a question taxpayers and four spurned authors should be asking after judges charged with deciding the winner of the Victorian Premier’s Literary Award for non-fiction decided a pet cause trumped the contest’s rules. Many will have read how Manus detainee Behrouz Boochani (left) was awarded the richest prize for writers in the country, a very tidy $100,000, plus a second award of $25,000.

Rule Seven puts it simply, as the best writing should:

7. Authors must be Australian citizens or permanent residents of Australia.

Mr Boochani is neither.

A thwarted illegal immigrant from Iran, he is a long-term resident of Manus Island, whence his epistles to The Guardian and other outlets have built up quite the cult following among Australia’s open-borders crowd. In this regard he landed on his feet because the five judges, appointed by The Wheeler Centre which administers the awards, are all huge and persistent advocates for leaky boats and those who sail in them.

It’s interesting how many people have leapt on the bandwagon (supporting same-sex marriage) but remain silent about the fact we are holding men in detention in Papua New Guinea who have fled because of their sexuality. Were they to be released in Papua New Guinea, which the government says they could be, they face huge possibilities of violence, intimidation, imprisonment and maybe death.

Perhaps it was Mr Boochani’s dispatch to The Guardian which especially impressed him:

Toilets, the last refuge for [fellow Manus resident] Alex and his boyfriend, were converted into a public place. In practice, he did not have any privacy in the prison any longer. Those who never had to experience being in prison might not be able to contemplate what I mean by lack of privacy. It is hard to imagine how tough it is living under the heavy gaze of a closed community.

Fatima Measham, until recently consulting editor at the Jesuit-funded Eureka Street and ardent campaigner against racism, sexism, coal, Islamophobia, homophobia, Tony Abbott and all the other causes that raise bulk cheers from the Twitter crowd. Going by a recent column, she might well have regarded tearing up the rules as a moral and redemptive obligation:

What is the worst thing that can happen if we brought all refugees in offshore detention to our shores and let them begin their lives? The worst has already happened. Men have died in despair by their hand and others, and from rampant neglect on the part of the Australian government. Children have given up in the most profound way possible.

If we accept that the worst has already happened, if politicians can find character enough to own what they have sanctioned, then space can be made — for life, and perhaps a measure of redemption where there has been dishonour.

In another essay excoriating Australia, even broadband becomes an exhibit for the prosecution:

Australia has been bogged in mediocrity for some time. It has sunk in critical areas: climate action, renewable energy, wildlife protection, education, broadband and other infrastructure. But there is one area in which Australia has been remarkably exceptional: cruelty against people who came by boat to seek asylum.

Funny thing is, though, Ms Measham is big on rules when she perceives people of whom she disapproves to be breaking them. This tweet from February 3: 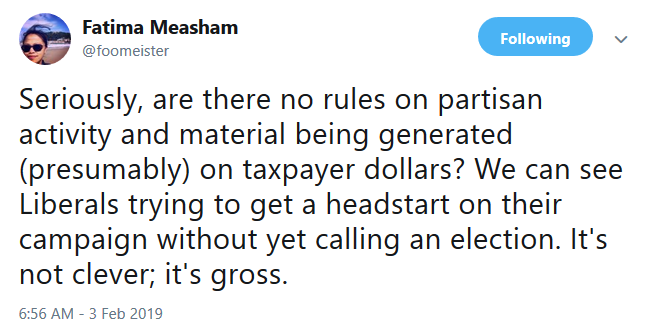 Sonia Nair ‘s online CV announces that she has been

… volunteering at Right Now since 2012 in various capacities, a highlight of which was programming a social-justice focused day at the 2017 Melbourne Writers Festival called Protest and Persist. She is a writer and critic who has been published by The Wheeler Centre, The Lifted Brow, Meanjin, Time Out, Kill Your Darlings, Metro …

On the topic of Manus and Nauru, a woman who last year was still traveling on her Malaysian passport writes

Every Australian should know what these men have gone through, what atrocities are being carried out under the banner of the Australian flag, and what needs to be done to stop it from happening so these men are not consigned to the “non-people” they are in the danger of becoming.

Atrocities? One would imagine the judge of a literary award might have a better command of words and their definitions. Oh, and of history, too, as that same essay decries “Australian pillaging of Nauruan land”. It will come as news to Ms Nair that Nauru was once the world’s richest nation as a result of that very same “pillaging”. Alas, all that immense phosphate wealth was squandered on, among other things, the production of a West End musical that depicted Leonardo daVinci, widely believed to be homosexual, as a lusty hetero and father of Mona Lisa’s child. As The Independent put it in 2008 when explaining where all those billions of dollars went:

Presidents would commandeer aircraft to take their wives shopping in Melbourne, New York and Singapore. Households owned three cars, including, in one case, a Lamborghini, although the island has a 40kph (25mph) speed limit and only one 12-mile circular paved road. Jobs were plentiful, housing free, and no one paid tax. Children went to the best schools in Australia and Nauruans gave lavish gifts, such as three-piece suites.

Jordana Silverstein is an ARC Postdoctoral Associate with the ARC Laureate Fellowship Project ‘Child Refugees and Australian Internationalism: 1920 to the Present’, led by Professor Joy Damousi. As part of this project, Jordana is investigating the history of Australian Government policy directed towards child refugees from 1970 to the present.

Her previous research has focused on questions of belonging, nationalism, identity, historiography, sexuality and memory, which she has primarily investigated through the lens of Australian Jewish history.

Her Twitter feed will leave no doubt where she stands on the matter of offshore detention.

Finally there is Bhakthi Puvanenthiran, associate editor of Crikey!

Does anything more really need to be said about the perspective and opinion she brings to offshore detention?

Well perhaps one thing. In an interview with medianet.com.au she explained what to look for when hunting up a story:

I think it’s always about looking at who is involved and what that tells us about a situation.

What the decision to shred the rules of the Victorian Premiers’ Literary Awards tells us is that, as always seems to be the case when public monies are bestowed on the artsy Left, the people handing out the cash tell us very much indeed about any given “situation”.

As to the four spurned entrants, all eligible under the rules, they might now have concluded they never had a chance of taking home that $125,000 prize.

Perhaps one or all could obtain legal advice about the award’s Rule #6:

Breach of the conditions of entry will render an entry invalid.

12 thoughts on “Rules? The Left Grants Itself Immunity”

From Kitchen to Lakemba’s Cauldron

Waiting … and Waiting … for the ‘Second Wave’