Peter Ryan,  a hero of  WW11, of publishing and of authorship, ran Melbourne University Press (MUP)  from 1962 until 1988. He died at 92 on December 13, having delighted Quadrant readers for years with his back-page essay and sterling sentiments, always in the prose of a master story-teller. I met him only a couple of times, and on both occasions was amused by how often this frail old gent’s stories involved desires or threats to punch hypocrites and equivocators on the nose.

He was not just physically fearless. He also delivered powerfully written punches. Best known is his demolition of the MUP’s own pet author, historian Manning Clark. Less known is his exposure of the culture of thieving by students (and occasional academics) at Melbourne University during his MUP days. This involved the virtual tolerance of larceny by the university’s Grand Pooh-Bahs and student union.

Peter Ryan’s Final Proof: Memoirs of a Publisher
can be purchased here

When he arrived at MUP as its director, book thieving from the MUP’s on-campus bookstore was out of control. His fight against the thieves was thwarted at every turn by soft-spined overlords. Between the thieving and the university’s bureaucratic incompetence, he estimated that the financial performance of MUP during his tenure was degraded by some $20 million. In the Sixties, when dollars were worth something, Ryan estimated his bookshop was losing $250,000 a year to thieves.

Moreover, the thieves’ victims were not the university per se but the honest students who had to pay book prices inflated to cover “shrinkage”.

Here I’ll confess to some thieving of my own: I’m drawing all my material from his book Final Proof: Memoirs of a Publisher (Quadrant Books, 2010).[i] So sue me, Keith Windschuttle!

The index to Final Proof has only names, so the accounts of the thievery are to be found scattered among the 200 pages. Apart from campus thieves, Ryan also had to deal with authorized and forcible extraction of the public’s money via papermakers’ cartels and monopolies. Those cartels were rife through every section of Australian business until the Lionel Murphy anti-cartel legislation of 1974, striking down literally thousands of trade-association’s price-fixing agreements.[ii] 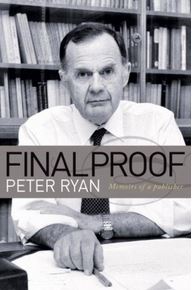 Yet another legal variety of enforced money-extraction was the frequent refusal of the big publishers and book retailers to pay their MUP bills, not merely when due but sometimes only at the point of a summons. After one successful court action, Ryan had to visit the offending publisher/customer and wait outside the CEO’s door until the cheque was grudgingly produced. He then hurried to the bank with it in order to ensure its validity.

So let’s begin. On first arriving at MUP, Ryan learnt of the uncontrolled shoplifting at MUP’s Bookroom. This was no small bookshop. It had 25 staff and, at one stage, ranked as the biggest single-store retail book outlet in Australia. Ryan at once persuaded the MUP board – despite some timidity – to hire  private detective Ernie to assess the situation.

A good operator, Ernie turned up in a tweed sports jacket with authentic leather elbow patches, puffing a pipe and browsing the shelves with a learned tome tucked under an arm. On other days he wore or carried a white lab coat. No customer paid him any mind. Ernie also loitered in the student union café, overhearing details and names. He was able in short order to provide Ryan with a report on how MUP was being robbed blind.

The two-dozen staff were unfazed by thievery. The Bookroom was so badly designed and operated that customers were almost invited to by-pass the till. Customers were even allowed to carry in their bags and attaché cases, the better to carry away plunder en masse. Many of the staff took the view that they were “professional book people, not policemen”. Ryan read them the Riot Act, and half-a-dozen departed with severance pay the same afternoon.

The thieves were largely male, enrolled students, but students imbued with ill intent from other establishments of higher learning also were frequent visitors. “Several members of Melbourne’s [University] teaching staff were also apprehended, and some later convicted in the Carlton Magistrate’s Court”, Ryan writes. (p112).

Student thieves included casuals, but the real damage was inflicted by students stealing textbooks to order for other students and commercial customers, usually at 50% of list price. The student union’s “book exchange” facility became at times little better than a whitewashed fencing operation. “There was a regular and substantial trade in stolen books which went into second-hand bookshops off campus,” he says. Students even staged two night-time break-and-enters, carting away multiple copies of valuable textbooks by truck, “later to appear as stock on the shelves of commercial bookshops,” Ryan wrote with some bitterness.

Ryan knew MUP could even be bankrupted by the thieving and sought exemplary punishments for those caught. In that pre-scanning era, he  tightened supervision   and put up notices saying thieves would be referred to the police.

To the police? This caused outrage, even with his own MUP board. Un-spined professors lamented that it would be a sad day whenever police came on campus to monster students and blight their careers with convictions for theft. Fortunately, the MUP chair William Macmahon Ball told them politely to shut it. Staff were  directed to refer all cases to Carlton police. A few students were convicted. Ryan: “The news spread like a bushfire; shoplifting sharply diminished.”

Problem solved? No way! Melbourne University’s governing council stepped in and forbade MUP to refer any more enrolled students to the police. Instead, these wayward lambs in the university’s flock would be handled by the university’s own Disciplinary Committee (non-students could still face court).

A stream of alleged malefactors was subjected to the internal processes. All were either acquitted or fined a paltry $5. In 20 years, the largest fines were a $50 penalty and $25. Again, word spread. Tough and realistic student thieves swung back into action, confident that the worst case would involve a small-change “licence fee” while their cash upside was unlimited. Morale of the bookshop staff plummeted.

In vain the MUP board argued its case for severity to the university council, the argument being that students were a sacred species. “Over the two decades a limp-wristed university allowed millions of dollars of public money to filter through its feeble fingers to thieves. If Council had made ‘sending down’ [expulsion] from the University the standard penalty for stealing, shoplifting would at once have become a rarity.” P114.

Next, Ryan was asked from on high to “discuss” the problem with the Student Representative Council. The SRC President was a “slim and gingery young man” who argued against any blighting of thieves’ future career prospects. Moreover,  said the student president, in the cause of student autonomy prosecutions should not even go to the University committee but to the SRC’s own disciplinary committee. That aggrieved young man was Gareth Evans, currently ANU Chancellor. His plea to Ryan was that, “Students would appreciate being judged by their peers” (P114-15). Ryan asked what sort of conviction rate the student committee might exact, but the young Gareth, now AC and QC,   hadn’t thought that far ahead. The two men left with a polite  agreement to differ.

So for 20 more years the theft industry boomed. Each student caught involved MUP in preparing a legal case for University Council, involving a typical cost of  $100 (in what was then real money).

Ryan happily conceded that most students were honest and hardworking, but chided them for supine attitude towards dishonest peers and  ineffective representatives.

“I feel sad that 26 years service in the University of Melbourne inspired me with no very exalted view of undergraduate idealism or aspiration,” he wrote. “This judgment may be unfair, and perhaps unduly influenced by daily exposure to costly and degrading student dishonesty in the Bookroom.”

Ryan waxed at length about the University’s money-wasting through absurd bureaucratic processes, but that’s another story I won’t steal today.

(editor’s note: this piece was first published by Quadrant Online in 2015)

[ii] When Ryan wrote a Financial Review piece accusing paper-maker APPM among others of  holding the entire printing and publishing industry to ransom, APPM issued a libel writ but did not follow up on it.

All that sex ed and we still need RU486? Go figure