I SEE that the Reserve Bank would like more secondary-school students to study economics. The Bank gave some cogent reasons in a submission (November 2018) to the NSW Education Standards Authority, which is reviewing the curriculum:

First, studying Economics helps raise the level of economic literacy in the wider community so that citizens are better informed about the economic decisions they make and the economic events that affect them. Second, with active engagement in the study of Economics, there is more likely to be a talented and diverse pool of economic graduates from which organisations can recruit, particularly those organisations that make public policy decisions. Third, the analytical skills acquired in the study of Economics are well suited to the changing nature of work and are rewarded by the labour market.

Having studied economics, I understand where the bank is coming from. However, the better view, in this case, is that learning can be a dangerous thing. Ignorance is preferable to having one’s brain stuffed with false theories.

The economic pronouncements of the bank itself are often infected by John Maynard Keynes’ crackpot legacy. Sane people, with no economics, know that spending money doesn’t make them rich. They know, if they spend too much, that they will end up stony-broke, skint, impecunious, penurious; in Queer Street, shall we say. 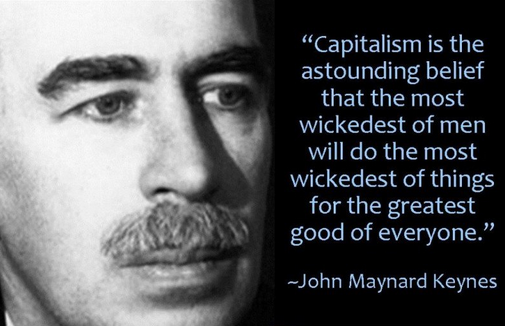 But, since Keynes, most of those who have studied economics long and hard, including central bankers, “know” that spending makes you rich. They cite consumer spending as being the most significant contributor to GDP. Thus, they often express alarm at the prospect of consumers spending less of their incomes. Now someone armed only with common sense might say, ‘Look, we should measure the value of the consumer goods we produce not how much we buy’.

Buying lots of consumer goods made in China might be a sign that we are rich, but it does not make us rich or richer. Of course, those who taught and studied economics before the advent of Keynes’ theory in 1936 would know this. Unfortunately, economics is not what it was.

Economics is too querulous a subject for high school. Mathematics, English, physics, chemistry, geography — though perhaps not history — have a large component of objectivity about them. Economics is steeped in political partisanship. For example, Keynesian economics is not just an economic theory. It preaches on the frailty of capitalism and the attendant need for government to continually bail it out. Those on the left cannot give that up. And you can also imagine these days how climate change, not to mention Marxist nostrums, creep into economics teaching.

Economics, in my view, is best introduced in a university setting. But even then, I am not convinced that it doesn’t do more damage than good. Take the axiom (or it should be) that monetary wealth is a piece of paper or an accounting entry; it is not real wealth. How many economics graduates understand that? Not many, I would guess. Hence the mirage that taxing the wealthy frees up goods for general distribution.

Taxing the wealthy is not costless. To one extent or another, it reduces saving and consequently capital investment. Taken too far it results in the production and availability of fewer goods not more. There is a debate to be had about the appropriate extent of progressive taxation but not today’s ill-informed debate.

Be warned, socialist Alexandria Ocasio-Cortez of the Green New Deal fame has a degree in economics and international relations from Boston University. Imagine the quality and orientation of the teaching she received! Classical economics, free-market economics, tracing its heritage from Adam Smith and John Stuart Mill, is the only proper basis for the study of economics. Some intuitions still teach it. “The best schools” website[i] lists fifty of them worldwide.

Unless university students can be steered to one of these institutions, or are particularly independent minded, it is best to keep them away from economics. Better that they are uninstructed than being seriously misled. As for those in their formative years: teaching economics in schools, given the state of the discipline and the likely quality and orientation of teaching, might well, too often, be tantamount to child abuse.

The Missionary Position on Gay Marriage

It’s Not Democracy if the Left Doesn’t Win