Jane Harper (left) worked as a print journalist before writing her first novel, The Dry, which was published in 2016. Judging by her novels, she would have been a good old-fashioned journalist, one who observes keenly and sifts the facts objectively before setting them to print. She has now made herself into a good old-fashioned novelist, and has quickly written three best-selling murder mysteries.

The Dry was set in a fictional town in the Wimmera near the South Australian border; Force of Nature in the thickly forested mountains of north-east Victoria; The Lost Man is set in the drought-prone, flood-prone pastoral country of south-west Queensland. The hostility of the Australian continent to human hopes is a constant theme in all three novels, along with the limitations of human responses to that hostility.

Harper crafts her mysteries deftly, adding details and revealing character as she builds tension and makes us doubt what we thought we knew. In The Lost Man she begins with a man, Cameron Bright, found dead of dehydration in a remote part of his property during the hottest part of the year. The police find nothing to suggest foul play, so Cameron’s partly-estranged brother Nathan, who runs the adjoining property, decides to investigate. Chapter by chapter Nathan learns the truth about his brother, and we come to realise that virtually everybody who knew Cameron had good reason to distrust, fear or hate him. 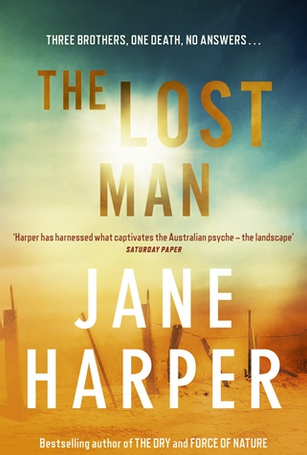 For a start, who else has written fiction or anything else about outback Australia in recent decades who has not written drivel about Aborigines? In The Lost Man there is one mention of one historical incident involving an individual Aborigine, and that’s it. This attention to the individual characterises Harper’s writing. In the hands of another writer, The Lost Man, in which the man being investigated is gradually revealed to have treated many women abominably, could have become a feminist tract. In Harper’s hands Cameron Bright is one individual man who has committed evil acts. The other men in the novel, for all their faults, have not, and are appalled when they learn what Cameron has done.

The central figure in the novel is Nathan. He is the divorced father of a teenage boy, Xander, who is living with his mother in Brisbane, but visiting Nathan for Christmas. Years before, Nathan had argued with his difficult father-in-law, then ignored him when he came across him and his broken-down vehicle beside a remote track. His father-in-law survived, just, but Nathan had broken one of the cardinal rules of the outback and was consequently ostracised by the locals, except for his own family, and lost all his employees, who preferred not to work for this outcast. For years he has lived alone on his unproductive property. Now, drawn back to his family by his brother’s death, he is able, as the novel proceeds, to redeem himself gradually, but it takes an effort, sustained over time.

Many of the other characters also determine to improve their lives by making an effort in their different ways, including Xander, Nathan’s mother, Nathan’s younger brother, and Cameron’s wife and now widow. All succeed to some extent. It is a hopeful but unsentimental novel.

It is a masterly achievement of Harper’s to raise Nathan’s human standing as she lowers Cameron’s. In each case a powerful reputation – Cameron’s unjustifiably high because of his ability to hide his vileness using cunning and threats, Nathan’s justifiably low because of his mistakes and his stubbornness – is worn away.

Jane Harper is still only in her thirties. In three years she has written three fine novels about Australia and is learning and developing as she goes. Her future, and ours as her readers, looks happy indeed.

Signs of panic at Their ABC