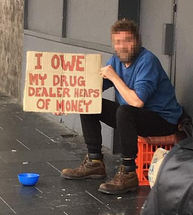 Lendlease Property has announced that part of the proceeds from the sale of every new home and lot will be directed to a new philanthropic venture intended to help the homeless. The money will go to shelter and housing projects, support services, training and jobs programs.

This is a worthy cause. But is this really the best we can do to help the homeless Australians who are most in need? Or will any benefit go largely to the ‘homeless industry’ already receiving in excess of $800 million a year in taxpayer funding? There is no doubting the honourable intentions of those battling at the coalface — the well-meaning individuals dispensing blankets and soup to the homeless. But at a macro level, the operations of the ‘homelessness industry’ of academics, charities and NGOs that lobby government on the alleged problems and solutions have remained largely untouchable and exempt from serious scrutiny.

The reality is that the orthodox account of homelessness prompted by advocates is deeply flawed. We are told that the 50-year-old who sleeps rough in a makeshift shelter in a city park is a victim — and symbol — of unfair socio-economic structures that blight modern capitalist societies. The so-called solution for such systemic injustice is the predictable, but deeply misleading, remedy of more government spending on public housing.

If only solving homelessness were so simple. Despite almost $10 billion spent annually by Australian governments on social housing, the numbers of rough sleepers have increased by 20% over the past five years. Ironically, these figures are downplayed by the industry because they do not fit its preferred ‘more housing’ narrative. Promoted instead are dodgy Australian Bureau of Statistics figures that exaggerate the numbers of homeless.  According to the ABS, there are more than 100,000 homeless in Australia. However, at the 2016 census just 7% (8200) of those counted as ‘officially homeless’ met the average Australian’s understanding of the term: a person who sleeps rough, and usually on the streets.

The inflated figure of 100,000 is based on a flawed definition that includes the ‘housed homeless’ such as people already living in supported accommodation. The ABS also counts groups who would not consider themselves homeless, such as those who live in crowded dwellings. Take the recent immigrant from China or India who, while starting out their new life in Australia, decides to live in shared accommodation for economic reasons – perhaps so they can remit more money, or maybe to save money to buy a home or start a business. According to the ABS, these people are homeless.

Not surprisingly, the ABS stats show the largest growth in spuriously defined ‘homelessness’ is in people living in over-crowded accommodation in major cities where rates of net overseas migration have been the highest.

The false figures allow the homeless industry to focus not only on the wrong problem — and ignore the needs of the most severely homeless — but to call for the wrong solutions. Let’s not forget that rough sleepers have significantly foreshortened life expectancies and are commonly victims of assault. Many are tormented for years by the symptoms of untreated schizophrenia. They are also prone to infections, as a recent outbreak of Hepatitis A among Victorian homeless people demonstrated.

The industry says homelessness is not a choice. But it’s not so simple. One of the consequences of severe mental illness and drug addiction is their ability to impair rational decision-making and limit the range of choices available to a person. We know, for example, that some rough sleepers choose homelessness over treatment for drug and alcohol addiction. Some even prefer feeding the addiction to paying rent.

However, the industry is staunchly opposed to any interventions that target the individual, behavioural and cultural factors that cause and maintain the most serious kind of homelessness.  This is a product of the ‘social worker’ ethos that pervades the sector: a way of thinking that obsesses over social structures and elevates autonomy and not appearing ‘judgemental’ above other ethical concerns.

Hence social-work led homelessness outreach teams agonise about violating the ‘rights’ of the rough sleepers and disrupting the homeless ‘culture’. This means that the homeless are expected to accept help voluntarily. But in many cases, this is to anticipate the impossible: if they had the capacity to make rational choices, how many people would choose to sleep rough?

The government must consider more assertive approaches to helping people exit the streets. It must consider, where necessary, interventions that restrict freedoms in the short term to maximise liberty and health in the long term.

Here are four things that should be done by policymakers, but which will never feature in the endless submissions and advertising material soliciting donations generated by the homeless industry:

If we really want to end homelessness, we need to implement the genuine solutions required to help the homeless get off the streets into necessary treatment and appropriate places of care and safety.

These solutions aren’t fashionable and they don’t afford CEOs of corporations the chance to virtue-signal by pretending to sleep rough once a year in the name of helping end homelessness in Australia.

But these real solutions would save rough sleepers from continuing to live and die on the streets while their ‘rights’ saluted but their health and life expectancy ignored.

Dr Carlos d’Abrera, a psychiatrist and Research Associate at the Centre for Independent Studies,  is the author of the research report, Dying with their Rights On: The Myths and Realities of Ending Homelessness in Australia