Pumps, politics and the gift of a big heel

It is a truth universally acknowledged that a shoe-off moment is a symbol of disempowerment, at least in politics and fairy tales. Women who part with a shoe or two in a public place tend to be on shaky ground. Whether a gift of footwear – even one in red satin with jewelled heels – to the Museum of Australian Democracy last week will alter that perception remains to be seen.

As Australia’s first foreign minister I always wanted to ensure that I made it easier, not harder, for other women to follow.

Throughout history people have been defined by what they wear. I decided to go for what I would consider a sensible pair of heels, or a comfortable working boot.

If by gifting these red shoes I inspire just one young woman to aspire to enter public life, to aspire to be a foreign minister or indeed a prime minister, this gift will have been worth making.

A noble gesture. But is such a symbol psychologically appropriate to attract the best can 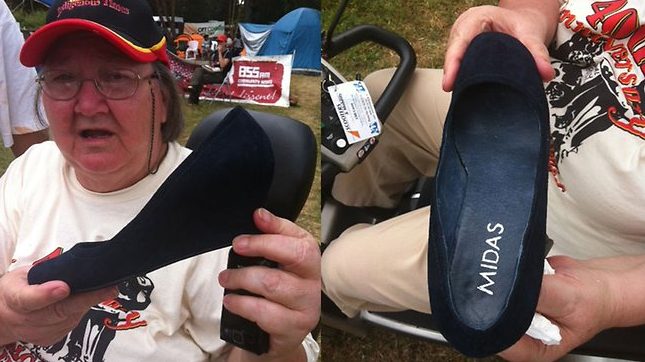 didates? Will it dispel the long shadow cast by the nasty shoe-off experiences of other women in the Australian political space?

Remember, for example, the navy-blue suede size 36 Midas Glorify shoe that slipped off then-PM Gillard’s right foot on Australia Day 2012? That’s it above, proudly displayed by the woman who recovered it, Indigene activist Pat Eatock.

Ms Gillard was unshod while being rushed by AFP security from Canberra’s Lobby Restaurant to her prime ministerial car. Described as “one of the ugliest moments in Australian politics”, this “grubby” saga must have discouraged many women from putting their best foot forward.

Some readers may recall another incident involving a right shoe. It also slipped off the foot of a woman under duress. Place: the crowded tarmac of Sydney’s Mascot airport. Time: April 19, 1954.

Its owner was Evdokia Petrova, an officer in the Soviet Ministry of Internal Affairs (Ministerstvo Vnutrennikh Del, MVD) and wife of Vladimir Petrov. He was a colonel in (what became in 1954) the Committee for State Security  and a Cold War defector. Sent by Soviet security chief, Lavrentiy Beria, he had been working as a Third Secretary at the embassy here since February 1951. Stalin’s death in 1953, however, was a game changer. Beria was shot by his successors. Petrov, convinced he would meet the same fate if he returned, defected on April 3, apparently without his wife’s knowledge. The quid pro quo – 5,000 pounds and all the documents he could bring with him.

Two armed MVD ‘diplomatic couriers’, Jarkhov and Karpinsky, came to Australia to escort Petrova back to the Soviet Union. Arriving at Sydney airport on the morning of April 19, they were confronted by an angry crowd. Many believed she was being taken back by force to be executed, especially the Eastern European immigrants.

The crowd broke through police cordons as they crossed the tarmac, rushed forward and surrounded them. Mrs Petrov’s clothing was grabbed in an attempt to hold her back, but she was pulled on board with the crew’s assistance.

A newsreel of the event captured the mayhem. Narrator: “Mrs Petrov’s shoe – lost in the struggle – is secured by a bystander”. The camera zooms in on it, held above the crowd by a triumphant – and anonymous – pair of hands.

The saga did not end there. PM Menzies, unsettled by the drama and its possible impact on an approaching election, radioed the pilot of the now-airborne plane with a request to establish (rather late in the day) whether Mrs Petrov was ‘happy’ about being escorted back to the USSR. When she did not – or could not – give a clear answer, he instructed ASIO to terminate the flight in Darwin during a refuelling stop, which it did on the morning of April 20.  The couriers were confronted on the pretext of illegally carrying weapons and Mrs Petrova was offered asylum again. She finally accepted after speaking to her husband by phone, but remained very fearful for her family in Moscow.

The fate of Mrs Petrov’s lost shoe was unknown for decades. Was it actually red or was this symbolic colouring, a distortion to assuage strong anti-communist public sentiment? Fortunately, we now know the truth. The nation’s roving diplomat, Sir Les Patterson, outed himself as its new owner. “Drawn like a moth to the flame of events, a blow-fly to the bull’s bum of history”, apparently he was the bystander who waved it above the crowd at the 1954 airport fracas.

“As you can see, it’s red,” he said in Barry Humphries’ Flashbacks (Episode 1: The 50s); (sniffing) “after all these years, every time I sniff this shoe, I can smell only one thing – fear”. (Interested readers can see it on occasional display at the Dame Edna Everage Cultural Centre, Moonee Ponds, or in the Parliament House Gender & Genuflection Exhibition.)

So much for the politics. There is an important psychological dimension here too. According to Swiss Jungian analyst Marie Louise von Franz, the shoe is a symbol of power; hence expressions like being ‘under a person’s heel’, or ‘stepping into one’s father’s shoes’.

“Shoes are the lowest part of our clothing and represent our standpoint in relation to reality – how solidly our feet are planted on the ground; how solidly the earth supports us gives the measure of our power.” (Sigmund Freud had some very Freudian views on shoes too, but that’s another story).

As for red shoes, they have a special significance. In Hans Christian Andersen’s 1845 fairy tale, The Red Shoes, they symbolise vanity, the pursuit of sensation over substance, of glitz over guts and gumption.

Karen is a girl from a poor family. She gets her hands on a pair of shoes made “from scraps of red material” given to her by a widow. Her troubles begin when she wears them to her mother’s funeral, despite the fact “they weren’t the proper colour for mourning”. Bad decision, bad karma.

Perhaps the story is due for update: Karen gets lucky and is adopted by a rich political party. One day she sees a princess wearing “the loveliest red shoes” and dreams about them night after night, and during the day too. She persuades someone to buy her a pair, which she wears on special occasions. They cause great excitement among her increasing number of admirers, some of whom begin to call her Superwoman.

There are, however, two problems. Firstly, “wearing red shoes in the chamber is improper”. Secondly, they distract her from important matters of state: affirmative action, bullying, gender quotas, harassment, inappropriate touching, gazing or speaking, and dealing with a worrying proliferation of toxic masculinity and suggestive remarks everywhere.

Karen becomes so vain about her red shoes she deserts the party when it gets sick, just for a chance to dance on its grave in them.

The Greeks did not invent hubris for nothing. Karen is cursed to dance forever in her shoes. In desperation, she begs an executioner to chop off her feet.

So red shoes = vanity. If you want to hobble around for the rest of your life and be known to your friends as Stumpy, you better shove them in a closet and opt for a humbler colour. Unless you plan on later telling God that you feel super-duper awfully bad about how much you love them and that you will give them away to a needy museum.

No wonder a South Korean director saw the tale as the ideal subject for a 2005 horror movie. “All I did was pick them up. That’s all!” says the terrified female character, Sun Jae (Seong-su Kim).

There is another interpretation, one more acceptable to gender warriors obsessed with female empowerment: red shoes as a symbol of redemption.

Yes, the red shoes cause Karen to get her feet chopped off. And yes, she is haunted by the ghostly image of them dancing around with her dismembered feet. But when she repents “in the depth of her heart”, a patriarchal God grants her mercy and lets her into Heaven.

In this version, then, letting go of one’s red shoes – actually and psychologically – can lead to marginally better outcomes.

Perhaps our ex-foreign minister, like Gerda in Andersen’s The Snow Queen, feels that gifting her beloved shoes will lead – in some mysterious way – to the granting of a Christmas wish.

Sir Les Paterson, however, would be sceptical. One can imagine him saying: “Every time I sniff them, I smell only one thing – another media stunt.”

Anyway, even fashionistas are saying “understatement” is the new buzzword. Less is definitely more. One should veer towards simplicity, advises fashion writer, Kirstie Clements, even in the footwear department.

Street style is full of magnificent peacocks, styled to within an inch of their lives and attempting to look nonchalant at the same time. It can feel like overkill.

To conclude, Jane Austen did not write in red shoes, nor did Agatha Christie, Muriel Spark, Anita Brookner or countless other female authors. Mrs Thatcher did not wear them, nor does Angela Merkel. Mrs Marcos owned a few pairs, as did Mrs Peron and the wives and mistresses of countless other dodgy presidents. Louis XIV liked red shoes with heels too, and look how he met his Maker.

Surely there is another truth to be acknowledged: millions of women have achieved fame and fortune in many fields without paying too much attention to their footwear. Someone might even say that if political shoe fetishism symbolizes anything it is decadence, not empowerment.

From Ballot Box To Abyss