John Julius Norwich, Quite a Life

John Julius Norwich had a blessed life. As an author, historian, presenter and commentator, he also gave much pleasure. Only weeks ago he launched what must have been his 35th book – a history of France through the eyes of a Francophile. And every year for nearly half a century he produced a commonplace selection, A Christmas Cracker, a slim, idiosyncratic collection of witticisms, verse, lists, jokes, quotes, and darts that underlined his prodigious reading. He did a great line in palindromes (‘Sex at noon taxes’) Yuletide will never be the same.

His breadth of knowledge was astonishing yet he wore it lightly. His enthusiasms included Venice, Sicily, Byzantium. He was the founding Chairman of Venice in Peril. An Anglican – he even wrote a history of the Papacy. (He noted, modestly, that he had only met four of the 266.)

He died on the eve of his parents’ 99th wedding anniversary. Mounted police had to control the crowds when on 2 June 1919, his mother, ‘the most beautiful girl in the world’, Lady Diana Manners, the youngest (putative) daughter of the 8th Duke of Rutland, wed Duff Cooper DSO, a penniless descendant of William IV and Mrs Jordan, the only son of Alfred Cooper, a surgeon who specialised in treating syphilis and piles. A grateful Edward VII knighted him in his Coronation Honours. Duff’s mother, Lady Agnes Duff, had been something of a bolter, having twice eloped before 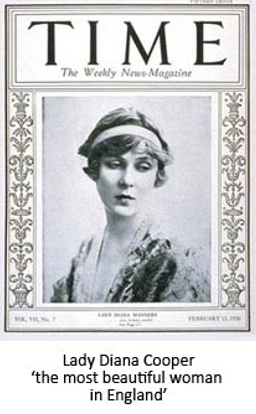 settling down with Alfred. John Julius wrote that his grandparents knew more about the private parts of the British aristocracy than anyone in the kingdom. (Their daughter, Duff’s sister, Stephanie, was the great-grandmother of former PM David Cameron). It seems that Diana was in fact the daughter of Harry Cust, a glamorous rake and heir to a Belvoir neighbour, Lord Brownlow at Belton. There was conjecture that Harry had also fathered a daughter to one of the Belton housemaids. That daughter was said to be Margaret Thatcher’s mother. Years later John Julius yearned to ask Carol Thatcher for a DNA test.

Diana would say that by 1916 Duff was the only boy she had danced with who was still alive. Her great love had been Raymond Asquith, eldest son of the Prime Minister. Diana’s mother was convinced that her daughter was destined to be the Princess of Wales so her marriage to Duff was a great disappointment. Erudite, plucky and priapic, Duff was a serial seducer but Diana loved him unreservedly and they proved an enduring match. Of Duff’s lovers, invariably friends of hers, she would say, ‘They were the flowers; but I am the tree’. In later life John Julius discovered a half-brother, William Patten, Duff’s son by Diana’s Paris Embassy friend, Susan Mary Patten (née Jay, later Alsop).

The birth of John Julius (by Caesarean section) after a decade gave Diana – beauty, actress, farmer, hostess, ambassadress, author and muse (another role at which she shone) as a mother. John Julius’s collection of his mother’s letters to him, Darling Monster (2013) paints a vivid picture of their bond (Evelyn Waugh paints a more imaginative picture in his novel, Scoop, presenting Diana as Julia Stitch and John Julius as her prodigious eight-year-old daughter, Josephine). Diana bestowed no less than 17 godparents on him; among them, a Muslim – the Aga Khan, a Jew – Otto Kahn, and a Catholic – Maurice Baring. And, for good measure, Margot Asquith, Viscountess Cranborne, JM Barrie, and Lord Beaverbrook. Home for his first years was in Bloomsbury but Christmases were spent at his uncle, the 9th Duke’s vast, Gothic revivalist Belvoir Castle in Leicestershire.

Duff became First Lord of the Admiralty and the three of them moved to Admiralty House where eight-year-old John Julius would look out the window over Trafalgar Square. But this treat was short-lived when Duff resigned over the Munich Agreement seventeen months later. When war came, to protect their precious son from the bombs, the Coopers sent him off to Canada to school – a bold move for Churchill’s minister responsible for morale. He returned after two years to Eton and then went up to New College, Oxford. For most of his life, unlike most children of his class and era, he was at the centre of his parents’ relentlessly social life: hearing Chaliapin sing in the garden; meeting HG Wells and Hilaire Belloc when they came for drinks; dining with Churchill, the Salisburys and Brendan Bracken; mixing cocktails for Cocteau; and lunching with de Gaulle. He had a profound capacity to please. When an old family friend, mixing his times from abroad, called once at 4.00 am, John Julius immediately answered, “Ali, how perfectly lovely to hear you.” 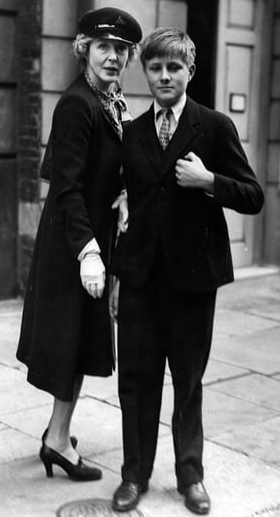 The Coopers’ golden years were Duff’s three years as Ambassador to France in liberated Paris. This was a job Diana was born to. Their time in Hotel de Charost, the former home of Pauline Bonaparte, is beautifully captured in Artemis Cooper and Antony Beevor’s Paris After The Liberation; in Susan Mary Alsop’s To Marietta from Paris; and, finally and most comically, in Nancy Mitford’s Don’t Tell Alfred – the last capturing Diana’s reluctance to leave the Embassy and her establishment of an irresistible, rival court at Chantilly. John Julius was of course a witness to much of it. After his retirement, Duff was ennobled as Viscount Norwich. Diana never liked the title. Given the paucity of Duff’s assets, she and John Julius had suggested Sansterre or Lackland. Diana, while acknowledging its coarseness, liked Lord Man-in-the-Moon; she being Diana, the moon. Duff chose Norwich with a quip, ‘A little Norwich is a dangerous thing’. John Julius became 2nd Viscount on Duff’s death in 1954.

At right, the young John Julius Norwich with his mother, Lady Diana Cooper.

John Julius had followed his father into the Foreign Office. Of course Diana did her very best to help. He wanted Moscow; his mother wanted him to have Paris – so he got Belgrade, which he loathed. He was much happier in Beirut, which began a love affair with the middle and near east. He wrote that he used consider himself a linguist – having mastered five languages – but when he found Arabic beyond him, he never made the claim again. Staying with friends in Amman they were joined by a young King Hussein who lent them his car to go to Petra.  This sort of thing happened throughout his life, especially when his mother was about. Like her, he was an inveterate traveller. Only two years ago he spoke at a literary festival in Dubai, promoting no less than three of his books and – typically – his last engagement, weeks before he died, was to be a concert in the Sistine Chapel but, like a number of Eminences before him, he fell as he climbed the stairs.

In 1964, deciding to live by the pen, he swapped the Foreign Office for the London Library. He settled in Little Venice with his young family, a few hundred yards from his adoring, but still bereft and needy mother.

He became a popular presenter and scriptwriter for television documentaries and a distinctly undiplomatic interviewee when recalling the famous figures he had met. Wallis Simpson and Diana Mosley were two memorable victims. His mellifluous voice could be heard as host of the BBC panel shows, My Word and Face The Music, and Round Britain Quiz. He presented evening concerts in the early days of radio Classic FM. His passion for music, and especially opera, was infectious. In 1992 he was created CVO by the Queen for his contribution to hER Ruby Jubilee. In 2015 he was awarded the Biographers’ Club award for his lifetime service to the art.

In 2000, he produce Shakespeare’s Kings, which The Guardian saw as ‘His kind of history is a rattling good yarn about kings, battles and treachery in which the true heroine is ‘England herself’’.’ The New York Times had a typical response, ‘Lord Norwich takes to his task with characteristic panache. His style is easy and highly readable, although occasionally florid. The need to condense and maintain the flow does occasionally produce minor wobbles to jolt anyone with detailed knowledge of the period.’

He married twice. His first wife was Anne (a great-aunt of Samantha Cameron), the eldest daughter of colonial governor, Sir Bede Clifford. They had two children – Artemis, a biographer and wife of the historian, Sir Antony Beevor; and Jason, now 3rd Viscount Norwich, an architect. In 1985, after 33 years together, the Norwiches divorced and settled, by his account, into an affectionate brother-sister relationship. John Julius also had a daughter, Allegra Huston, from an affair in the early sixties with John Huston’s fourth wife, Ricki. 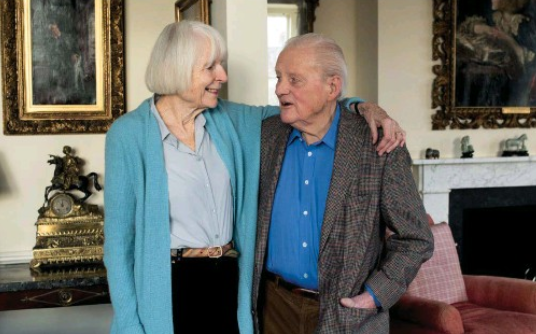 Increasingly, if unconsciously mimicking Mrs Stitch, the character she inspired, the indomitable Diana continued to drive her Mini around London until, in her ninetieth year, she hit a bollard. Although uninjured, she was shaken. (‘It could have been a child’). Apart from the odd party at Claridge’s, she took to her bed from where she continued to write and receive a stream of visitors until her death in 1986, aged 93.

Three years later John Julius married Mollie Philipps (at right), the daughter of Lord Sherfield and granddaughter of the founder of the Davis Cup. They had met at the London Library.

His delightful memoir, Trying To Please, appeared in 2008. In its last pages, he reflected,

“For nearly four-score years I have had a wonderful life, and have enjoyed it to the full. Of course, there have been moments of unhappiness – what life has been without them? – but they have been a mercifully small minority, easily outweighed by times of deep content.”

His philosophy was Voltairian, “Everything was for the best in the best of all possible worlds.” He had that distinctly British weakness for self-deprecation; once telling an interviewer ‘Deep down I’m shallow. I really am’ Deep down, he was brilliant – a splendid mix of both his parents.

A Simple Education in Funding

Kidding Ourselves About Islam