In its 2010 management plan Parks Australia outlined a series of measures it would need to justify a ban on climbing Ayers Rock. They are spelled out in section 6.3.3 (C):

(c) The climb will be permanently closed when:

None of the conditions outlined above have been met. Tourists have been omitted entirely from the consultation process, and any research on visitor intentions, particularly surveys, has been conducted by groups strongly biased against the climb. More than that, the surveys are strongly biased (in one study there was a bias of almost 2:1 in responses from females over males) and they lack statistical merit. Alternate visitor experiences, such as Segways around the rock, bush BBQ’s and the coming Uluru Skyship, a balloon tethered some 9km from the rock that only ascends to half the monolith’s height, are in no way comparable to the exhilaration, wonder and joy imparted by the climb. All these extras come at an additional and substantial cost on top of the park entry fee.

In regard to the second condition that, the proportion of visitors climbing falls below 20%, Parks Australia installed pedestrian counters and recorded data from June, 2011, to end of June, 2015, in what was presented as an attempt to establish the proportion of people climbing.

I obtained this data and via a FOI request. Re-analysis of the data does not support Parks’ contention that the 20% figure has been met when the availability of the climb is taken into account. Instead, it shows that, on average, for days tourists are able to make a fair choice between the climb and other activities, an average of 44% choose to climb, with the highest figures well above 70%.

The FOI documents also reveal the unreliable nature of the data Parks Australia has been spruiking, with counters being down for much of the assessment period, counters under-reporting the number of climbers by at least 30%, calibration issues with counters, and problems calculating total visitor numbers (kids are missing from the 2011 data). It’s a mess and does not withstand scrutiny!

For the period the counters were in place (between 1/6/2011 to 30/6/2015) Parks Australia’s onerous closure protocols meant the climb was fully open a mere 10% of the time (151 days out of 1491). A fair estimation of tourist preferences can only be made for those days that a full range of choices are available. Tourists visiting Ayers Rock are typically under tight time schedules and if a given activity is not available they quickly move to other options. There is no time to wait at the base of the rock for the climb to open. Most tourists will undertake only one strenuous activity in the morning, either one of the walks at the base or the climb (if available), before heading back to the resort to relax in the afternoon.

Under reporting: A significant issue flagged in a report analysing the data for Parks Australia (Becken 2017) is the under-reporting of climbers by counters. Feedback from experts suggested a figure of 30% was a fair estimation of the climbers who went unrecorded. This occurs because the counters record groups of climbers, rather than individuals.  Counters also recorded data on days the climb was officially closed, suggesting “illegal” climbs and saying a lot about visitor intentions. In addition they sometimes recorded figures higher than the number of daily visitors. These problems were discussed in internal memos but apparently never fully rectified. The counters were withdrawn from use in June, 2015.

Parks Australia’s dubious statistics: Griffith University’s Susanne Becken, professor of sustainable tourism, undertook a statistical analysis of climbing data from June, 2011, to the end of June, 2015. Becken’s views on the climb can be found in an article she wrote for The Conversation,  “Closing Uluru to climbers is better for tourism in the long run“, in which she and colleague Michelle Whitford make no bones about their views

Closing Uluru for climbing should be seen as a shining example of sustainable tourism being a vehicle for the preservation, maintenance and ongoing development of culture, traditions and knowledge.

To address the main question of whether the proportion of climbers is below or above 20 percent the answer depends on the method chosen (as illustrated in this report) and also whether particular months are of interest or an average over a year is taken.

In other words, if you are fair and take the availability of the climb into account, the 20% cut-off has not been reached. If you consider the entire time period, including all those days the climb is completely closed (49% of the time!), then those opposed to climbing get the lower figure they want — ie., less than 20% of visitors are climbing.

Figure 3 (reproduced below) of the Becken report shows a wide range in climbers on a daily basis. Most notable is the seasonal trend reflecting the effective complete closure of the climb between October and April, during warmer months, and the gap in data in 2013-2014 associated with the counters not operating. These unadjusted results, including partly open days, show many occasions where the proportion climbing exceeds 20%. In her report Becken did not separately assess the proportion of climbers on fully open days versus those days the climb was only partly open. Partly open days, included in figure 3 below, include days the climb was open for as little as an hour. In these circumstances it is not fair to use these figures to determine the intentions of tourists. 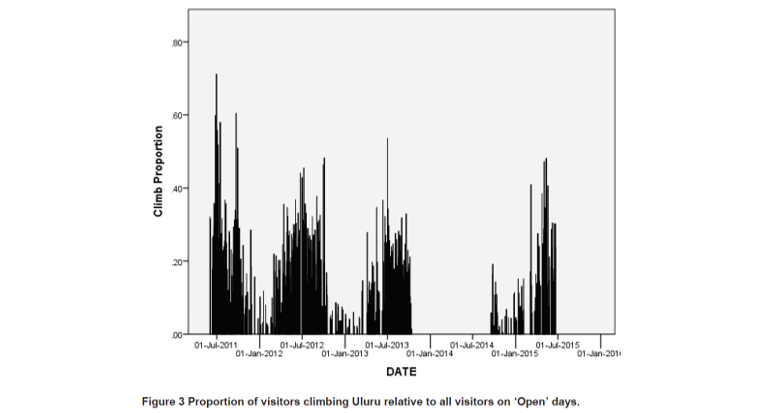 Re-analysis: Parks data was re-analysed looking at the proportion of tourists climbing on those days the Climb is fully open and data is deemed reliable. Only on those days can the intentions of tourists be fully assessed. Data was analysed for:

1. all days the climb was fully open, regardless of the data reliability

2. all days the climb was fully open for days with reliable data, and

3. all days the climb was fully open for days with reliable data, adjusted by 30% to account for under-counting.

1. The average proportion of those climbing on fully open days regardless of data quality (includes many days of missing counts and days of obvious and significant under-reporting) is 26.8% (>20%). 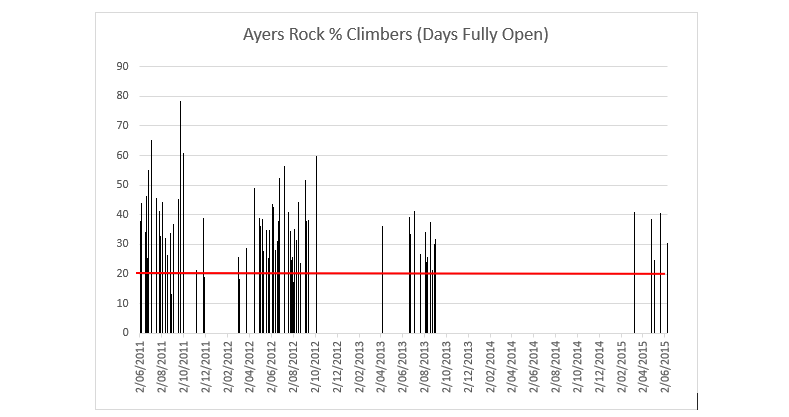 Average proportion of climbers on days Tourists are offered a full choice of options (un-adjusted) average is 34%.

The data also show no substantive change in the average proportion of climbers over the survey period:

Conclusions: When visitors are offered a full range of options from the moment the Park is open, the average proportion deciding to climb Ayers Rock remains well above the 20% cut off mark determined by Parks Australia, and is likely as high as 44%, with some days exceeding 70%.

There has also not been a substantive change in the proportion of climbers over the period covered by the monitoring data. The notion that less than 20% of visitors want to climb is complete nonsense.

Criteria used by Parks Australia to close the climb have not been met and there remains no justification for closing this natural wonder. The decision to climb, or not, remains best left to individuals.

Much Pain for Net Zero Gain