A few weeks ago, Kiama, where I live, found itself at the centre of a spectacular thunderstorm that struck at about 10.30pm.  I sat on my deck with a glass of red and enjoyed the most amazing natural light and sound show I have ever experienced.  Spectacular it was, but also at times quite intimidating, even sheltered as I was and with courage fortified by the grape.  At one point I wondered how one would feel if experiencing this “climate event” (as I suppose I should now call it)  beneath the rather more flimsy protection of a tent.  At that time of year, there would undoubtedly have been some people in that situation.  I decided I would rather forego that experience, which then gave me to wonder if, at some point in time, say in 1787, a forebear of today’s indigenous Australians, cowering in his bark gunyah, might have thought  “surely, after 65,000 years, we can do better than this”.

Unlikely, true, because our antipodean Archimedes could not have achieved his ‘Eureka!’ moment,  as those millennia of isolation had deprived Aboriginal culture of the cross-pollination of ideas that by 1788 had so greatly enriched the rest of the world.  In most human societies, small inventions crossed ethnic or tribal boundaries due to trade or conquest and then became better inventions or led to different ones. Prior to 1788, Australian Aborigines simply did not have the cultural tools to advance their culture beyond the Stone Age.

Which brings me to Invasion Day.  Some will argue that Aborigines did quite well, thank you very much, prior to the arrival of the First Fleet and would be quite happy had they been left indefinitely to their own devices. Those that would argue thus tend to be, at a risk of a generalisation’s broad stroke, well-heeled activists, inevitably of part-Aboriginal ancestry, who enjoy the benefits and conveniences of modern life and careers at universities or other taxpayer-funded QANGOs. Not for them the uncertain hunter-gatherer existence that makes the next meal problematic, nor the “payback culture” that sees the innocent punished for the crimes of their relatives.  Would Tarneen Onus-Williams, the woman who yearns to see Australia “burned to the ground”, be willing to revert to this lifestyle?

Admittedly, because of the huge disparity between the two cultures, there was always going to be trauma when Europeans came into contact with Aborigines. That the indigenous lot might have been far worse had some other nation’s ships arrived in Sydney Cove is a valid topic for speculation. But if we set aside the puerile notion implied in Onus-Williams’ incendiary advocacy — that Aborigines should have been left alone to continue their notionally idyllic lifestyle — I wonder if even the elders of 1788 subscribed to this idea.  Certainly, many opposed white settlement, at least in those instances when it adversely and directly affected them, and they sometimes expressed their displeasure in the time honoured way.  That said, they weren’t averse to taking advantage of those features of modernity they could clearly see would enhance their own lives.  Many co-operated with the settlers.  Good for them.  That’s how every other culture advanced.

Rousseauian romanticism aside, it was imperative Aborigines commenced the long overdue march towards modernity.  Why should the descendants of those 1788 Aborigines be condemned to a Stone Age life?  Yes, the latter often paid a tragic price at the personal level and that is to be regretted. But the consequences of a culture shock more than 200 years in the past should not have to be paid for in perpetuity by succeeding generations of Australians. The suffering of those earlier post-colonial generations of Aborigines paved the way for what the Tarneen Onus-Williamses and actress Shareena Clanton, who recently was granted leave to hog the Q&A limelight, enjoy today. How graceless that media tarts should so casually dismiss the benefits bestowed upon them, albeit often unwittingly, by those that have gone before. 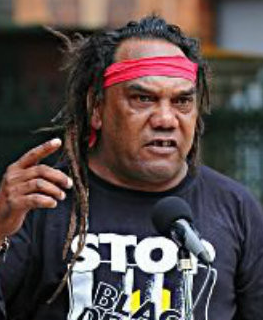 Recently, the aforementioned Ms Clanton claimed that Aborigines do not have a voice in this country. She did so with the indulgence of Q&A host Tony Jones, who deviated from his norm by allowing her to rabbit on through through several tranches of spleen that constituted 11 minutes of largely uninterrupted diatribe. As a good ABCer, Jones wouldn’t dream of derailing an Aborigine in full victim mode, no matter how illogical, ahistorical and inane. Why, that might be construed as racism!

If there are 11 minutes of your life you don’t mind wasting, watch Ms Clanton do her thing in the video clip below. Oh, and do note the body language of the person next to her, Josh Frydenberg, who manages a few words but pointedly neglects to correct any of the errors of fact that appear to be Ms Clanton’s stock in trade (“My mother was not considered a human being until the referendum came through in 1967.”). It seems AGL and renewables rent-seekers aren’t the only ones our energy minister is reluctant to call to account.

Yet another indigenous blowhard, Wayne Wharton (right) was quoted recently in The Australian  as blaming Malcolm Turnbull’s intransigence on reconciliation for the violence he claims is now very nearly poised to erupt at the Commonwealth Games.

“Malcolm Turnbull’s statements in the past three weeks are close to inciting [the use of] guns and [Aboriginal activists] taking up terrorism,” he said. “Some of our young people are not far off it.”

Had those sentiments come from other than an Aborigine they could easily have prompted a referral to the HRC at the very least.  Mr Wharton did not even bother to provide a formulaic rejection of violence, such as urging activists to pursue their goals by peaceful means.  The closest he could come was to say he “would not promise that protests at the [Commonwealth] Games … would remain peaceful”, which isn’t close at all. According to The Australian , “Mr Wharton is the leader of the Brisbane Aboriginal-Sovereign Embassy, a radical group that  advocates the decolonisation of Australia.”

It’s not clear what “decolonisation” means.  Deporting all who cannot claim indigenous ancestry to their putative homelands?  Or does it just mean letting them stay, but as second-class citizens in a country ruled by an Aboriginal elite?  Either way, it’s difficult to see how Turnbull’s position on Constitutional recognition, even were he to support the idea, would satisfy Wharton’s angry constituency.

Interestingly, both Mr Wharton and Ms Clanton seem to have done pretty well out of colonisation. As she explained on Q&A, all her sisters are university graduates or on the road to becoming such, while her mother obtained a law degree, presumably at a colonialist university, and built a career as a police prosecutor. As for Mr Wharton,  he owns his own demolition business, which presumably accepts payment in the colonists’ currency, rather than poison flour and infected blankets.

What a pity neither can look beyond grievance to cite themselves and their achievements as inspirations to fellow Aborigines.