At a glance it’s a mystery how Melbourne came to have an African gang problem. One day, or so it seemed, the City on the Yarra was as it had always been — a sprawling, sport-fixated country town, albeit with five million residents, never more content than when gazing into the navel of its parish-pump obsessions: AFL, artisan coffee, laneways, the sound of lawn mowers in what once was billed as the Garden State. Jaw-dropping crimes, a police force of dubious integrity, blatantly bent politicians — they were the hallmarks, or so we heard and believed, of cosmopolitan Sydney, that city of sin. Down here in the south we gave thanks for the good fortune to reside in a sedate, safe and civil burg.

Then, suddenly, we’re the South Bronx on the Bay, every morning’s news peppered with news of home invasions, riots, carjackings, robberies, assaults, police cars rammed. If Melbourne had a problem with “youths of African appearance”, according to the ever-quotable community leaders and activist lawyers The Age and ABC keep on speed-dial, it was that Victoria Police are bigots in blue who give young black men a hard time for no good reason at all.

Take the case of Magnus Kaba, a passenger in a car stopped by police for a routine licence and registration check in April, 2012, and depicted without exception in the media as a victim  after being charged with a variety of offences. The state’s Human Rights Commission, which the former Baillieu/Napthine Liberal government promised to scrap but didn’t, also weighed in on Mr Kaba’s behalf. Those reports, though, omitted what many might regard as pertinent details.

As Magistrate Duncan Reynolds acknowledged when the case came before him, Mr Kaba has a very salty tongue indeed, plus a brazen eagerness to confront authority with his private parts. The young man began his dialogue with the police who had pulled over his friend and driver by posing the question, “How long this was fucking going to take. I have somewhere to be?”

While the registration check was being conducted, Mr Kaba climbed out of the car, identified by police records as having been formerly involved in a drug-related investigation, and began walking from the scene. One of the officers gave chase, stopped him and demanded that he identify himself  “for the record”. At which point, as laid out in Magistrate Reynolds’ ruling, the following exchange took place (emphasis added):

… [Kaba was asked] for his name or identification to which he stated the response was ‘ … fuck off’. [Constable] Andrews again asked for indentification. [Constable] Randall had got out of the police car and approached Kaba. He stated to him that he needed his name ‘… to say I spoke to you’. Randall reported that the accused replied by saying ‘… go and get fucked cunt, I’ve done nothing wrong.”

Randall then informed Kalba that he had committed the offence of using offensive language. Randall stated that the accused said ‘… that’s fucking bullshit cunt, you are a racist‘.

The police officer then asked the accused for his name and address. The accused did not comply with the request and stated ‘… I don’t have to tell you anything, I’ve done nothing wrong’.

Randall then told Kaba that if he did not state his name and address, he would be placed under arrest ‘… until I can confirm who you are’.

The accused is said to have responded that ‘… this is  fucking bullshit, you’re just harassing me because I am black‘. Randall then informed the accused that he was under arrest for failing to state his name and address. He was then requested to turn out his pockets.

Randall stated that Kaba then removed his T-shirt, dropped his trousers and underpants, exposed and grabbed hold of his penis and said ‘ … see I have got nothing on me.

That was not quite the end of the encounter or of the subsequent charges to be laid against Mr Kaba, who police allege grabbed and squeezed the arresting officer’s testicles while being led to the divvy van, an action credibly said to have caused Constable Randall “immense pain”.

Magistrate Reynolds subsequently ruled there is no common law power vested in police that gives them the unfettered right to stop or detain a person and seek identification, an opinion subsequently overturned on appeal. 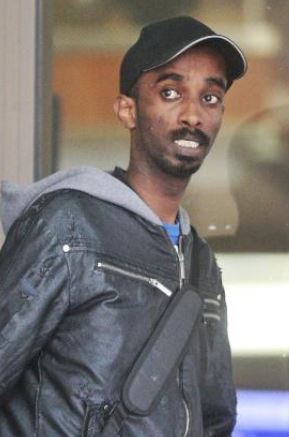 But before that, next stop for Mr Kaba was the Flemington and Kensington Community Legal Centre, which does a brisk trade in identifying racism amongst police and where he joined five other plaintiffs — including a certain Jabril God (left), another son of the Dark Continent of whom there will be more later — in suing Victoria Police for compensation.

He and his fellow litigants collected an undisclosed sum, reported by The Age as being “tens of thousands of dollars”, when the Victorian government abruptly capitulated and settled, despite having spent some $3 million on its defence,  according to then-Police Commissioner Ken Lay. Handing over money when accused of racist policing seems a near-reflex action in Victoria, regardless of which party is in government.

As to Mr God, who also shared in the windfall, he and his fellow plaintiffs were hailed as heroes by then-Police Commissioner Ken Lay, who lauded their courage, resilience and tenacity, which had  “done their community proud”. As a mark of that respect and as part of the settlement, Victoria Police also went on record as stating the force in general, and constables Randall and Andrews in particular, agreed to “acknowledge that any policing involving discrimination on the basis of race is unacceptable”. All this, mind you, prompted by a young man who refused to give his name and allegedly thought it appropriate to wave his willy at a walloper.

As the two officers vehemently denied wrongdoing when the state was still spending taxpayer money on their defence, one can imagine how those words must not easily have passed their lips.

Oh, and as to Mr God, one of the plaintiff’s lauded by Commissioner Lay, that payout might well have come in handy in covering the cost of other legal matters in which he was involved. As the Sunday Herald Sun reported

AN AFRICAN refugee who won a payout from Victoria Police after claiming he was “racially abused ” has been exposed as a violent criminal.

A Sunday Herald Sun investigation has uncovered that Jibril God has a history of violence, drug abuse and has terrified ex-girlfriends and family members.

God embarrassed Victoria Police when he was awarded a payout reportedly worth tens of thousands of dollars after claiming that he was stopped and searched because he was black. (readers with a Herald Sun subscription can read the entire report here)

Two weeks ago in the outer western suburb of Werribee, a war of sorts raged in the night when police were called to a house party attended by, as they say, many “youths of African appearance.” Rocks were thrown, neighbouring homes damaged and cars vandalised while residents bolted their doors and prayed the fracas would conclude.

Not one arrest was made. Not one.

It is a safe bet the officers who maintained a softly-softly attitude amidst the rain of rocks and bottles were aware of what befell constables Randall and Andrews and the legal gauntlet of accusation and inquisition that became their comrades’ unhappy lot after doing what the policemen and the non-activist public deem to be their jobs and duty. They might also have understood, as a serving policeman told Quadrant Online, that being caught up in such a case does one’s career not a jot of good.

Should we be surprised no arrests were made in Werribee? What else are those in the trenches to do when their uniformed generals and civic leaders turn tail and run.

UPDATE: Even as this piece was being entered into Quadrant‘s  publishing system, breaking reports of three more violent episodes involving people of African appearance were leading commercial radio news bulletins. The ABC (surpise!) focused on the alleged racist backlash against black people. If you haven’t yet heard the term “Africanphobia”, you will soon. Count on it.

Roger Franklin, b0rn and bred in Melbourne’s West, is the editor of Quadrant Online

The Gag Is On Every Single One Of Us